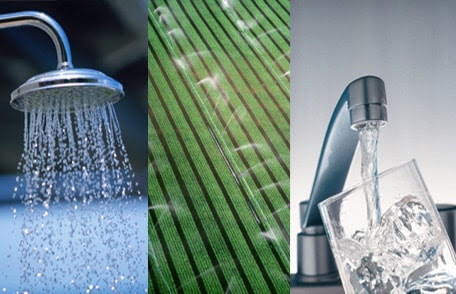 Much of the water we use comes from the ground. Learn more about ground water, the threats to its safety and how to protect your own ground water sources during Ground Water Awareness Week.
Clean water is one of the world's most precious resources. People use water every day for a variety of reasons, such as drinking, bathing, recreation, agriculture, cooling, industry, and medical uses. Although water plays an essential role in every person's life, many individuals are not aware that much of their water comes from the ground.
National Ground Water Awareness Week, an annual observance sponsored by the National Ground Water Association (NGWA), is March 8-14, 2015. The purpose of this observance is to stress how important ground water is to the health of all people and the environment.1

All groundwater sources should be protected from contamination.

Ground water is water that is located below the surface of the earth in spaces between rock and soil. Ground water supplies water to wells and springs and is a substantial source of water used in the United States. Thirty percent of all available freshwater comes from ground water,2 which supplies a significant amount of water to community water systems and private wells.3
Protecting ground water sources from contamination is an important priority for countries throughout the world, including the United States. Most of the time, ground water sources in the United States are safe to use and not a cause for worry. However, ground water sources can become contaminated with bacteria, viruses, parasites, and chemicals that can lead to sickness and disease.
Ground water contaminants sometimes occur naturally in the environment (for example, arsenic and radon), but are more often the result of human activities. These activities include incorrect use of fertilizers and pesticides; poorly sited, constructed or maintained septic systems; improper disposal or storage of wastes; resource extraction; and chemical spills at industrial sites.4 From 1971 to 2006, 54% of reported drinking water outbreaks were due to the use of untreated ground water (31%) or ground water treatment deficiencies (23%). The most common pathogens identified in ground water outbreaks during this period included Shigella spp., hepatitis A virus, norovirus, Giardia intestinalis, Campylobacter spp, and Salmonella spp.5 In 2009-2010, contamination of groundwater with parasites (Giardia intestinalis, Cryptosporidium sp.), bacteria (Campylobacter jejuni,Escherichia coli O157:H7), and viruses (Norovirus, Hepatitis A) led to a number of reported outbreaks.6
The presence of pathogens and chemicals in our drinking water can lead to health problems, including gastrointestinal illness, reproductive problems, and neurological disorders.6, 7 Infants, young children, pregnant women, the elderly, and people whose immune systems are compromised because of AIDS, chemotherapy, or transplant medications may be especially susceptible to illness from certain contaminants. Concerns for ground water contaminants have led the U.S. Environmental Protection Agency (EPA) and individual states to develop new regulations to protect ground water in public water systems (the Ground Water Rule).

Private well owners should have their water tested annually.

Is your household in either of these categories?

Are you among the almost 90 million Americans who get their tap water from a community water system that uses ground water?

Are you among the 13 million American households who have their own private wells?

An estimated 13 million American households get their water from private ground water wells, which are not subject to EPA regulations.9 Private ground water wells can provide safe, clean water. However, well water may be or become contaminated, leading to illness. It is the responsibility of the well owner to maintain their well and have the water tested on the recommended annual basis in order to ensure their water is safe from harmful contaminants.10 State and local health departments have resources available to help homeowners protect groundwater.