Although group B Streptococcus (GBS) is a leading cause of severe invasive disease in young infants worldwide, epidemiologic data and knowledge about risk factors for the disease are lacking from low- to middle-income countries. To determine the epidemiology of invasive GBS disease among young infants in a setting with high maternal HIV infection, we conducted hospital-based surveillance during 2004–2008 in Soweto, South Africa. Overall GBS incidence was 2.72 cases/1,000 live births (1.50 and 1.22, respectively, among infants with early-onset disease [EOD] and late-onset [LOD] disease). Risk for EOD and LOD was higher for HIV-exposed than HIV-unexposed infants. GBS serotypes Ia and III accounted for 84.0% of cases, and 16.9% of infected infants died. We estimate that use of trivalent GBS vaccine (serotypes Ia, Ib, and III) could prevent 2,105 invasive GBS cases and 278 deaths annually among infants in South Africa; therefore, vaccination of all pregnant women in this country should be explored.
In 2013, a total of 41.6% (2.6 million) of deaths worldwide in children <5 years of age occurred in neonates; 76.7% occurred within 6 days after birth (1). Furthermore, in 2012, ≈6.9 million probable cases of severe bacterial infections and 680,000 associated deaths occurred among neonates (2). Nevertheless, there is a paucity of data from low- and middle-income countries on pathogen-specific causes of neonatal sepsis, particularly during the first day of life, and it is unknown whether in utero HIV exposure increases susceptibility to severe neonatal bacterial infections.
Group B Streptococcus (GBS) is a leading cause of severe invasive disease in young infants. A meta-analysis dominated by studies from high-income countries estimated global incidence of 0.53 cases/1,000 live births during 2000–2011 (3). Considerable intra- and interregional variation in the incidence of invasive early-onset disease (EOD; disease in 0- to 6-day-old infants ) was observed (3–5), ranging from 1.21 cases/1,000 live births (95% CI 0.5–1.91) in Africa to 0.02 cases/1,000 live births (95% CI 0–0.07) in Southeast Asia (3). This variability is inconsistent with the lesser difference in prevalence of maternal GBS colonization, the major risk factor for EOD, in women from different regions (20.9% in Africa, 13.4% in Southeast Asia) (6). Maternal HIV infection has not been associated with a higher prevalence of GBS colonization (7,8), except among women with CD4+ lymphocyte counts of >500 cells/mm3 (8).
Providing intrapartum antimicrobial drug prophylaxis (IAP) to women identified as rectovaginally colonized by GBS at 35–37 weeks’ of pregnancy has been associated with a >80.0% reduction in EOD (9); however, this strategy is logistically challenging to implement and maintain in resource-constrained settings. Furthermore, IAP has not decreased the incidence of late-onset disease (LOD; disease in 7- to 90-day-old infants) (10).
Progress has been made in the development of a trivalent GBS polysaccharide–protein conjugate vaccine (GBS-CV), which is targeted for use in pregnant women; the goal is to enhance transplacental transfer of capsular antibody to the fetus (1,8–10), which could protect against EOD and LOD. Improved estimates of the incidence of invasive GBS disease are needed from low- and middle-income countries to contextualize the prioritization of GBS vaccination and determine whether temporal changes in invasive serotypes should be considered in the design of serotype-specific GBS vaccine.
We evaluated the clinical and microbiological epidemiology, incidence, and serotype distribution of invasive GBS disease among young infants in a setting with a high prevalence of maternal HIV infection. A secondary aim was to estimate the potential effect of a trivalent GBS-CV in reducing the number of invasive GBS cases nationally.

During 2004–2008, we undertook hospital-based surveillance of culture-confirmed invasive bacterial sepsis in infants 0–90 days of age at Chris Hani Baragwanath Academic Hospital (CHBAH), a public secondary–tertiary health care facility in Soweto, South Africa. CHBAH is the only public hospital in Soweto with neonatal care facilities; ≈90.0% of all hospitalizations from the community occur in this hospital. Soweto is a predominantly black-African community and has 1.4 million inhabitants, including 125,000 children <5 years of age and a birth cohort of ≈28,000/year (11); ≈21,000 are delivered at CHBAH and 7,000 are delivered at 1 of 6 community-based midwife obstetric units. Women with potentially complicated deliveries at midwife obstetric units and clinically ill newborns are referred to CHBAH by ambulance.
Health care for pregnant women and children is provided free of charge in South Africa (12). Most deliveries in Soweto (95.0%) (E. Buchmann, pers. comm., 2014 Jul 19) and in South Africa as a whole (87.3% in 2010) (13) occur in health facilities. Voluntary counseling and testing for HIV is offered at antenatal clinics; >96.0% of pregnant women accept testing (C. Mnyani, pers. comm,, 2014 Jul 28). Single-dose nevirapine, administered as standard of care to women in labor and their newborns to prevent mother-to-child HIV transmission, was supplemented in 2007 with triple antiretroviral therapy to immunocompromised women (<350 CD4+ cells/mm3) from 34 weeks’ gestation onward.
During the surveillance period, HIV prevalence in pregnant women remained stable at 29.9% (14), and ≈18.0% of all children were born prematurely (<37 weeks’ gestational age) or had a low birthweight (<2,500 g) (CHBAH, unpub. data). Gestational age was determined on the basis of the available obstetric or neonatal assessments by attending physicians. Healthy newborns are routinely discharged home 12 h after vaginal or 72 h after cesarian delivery.
At CHBAH, newborns with signs and symptoms of severe illness at birth or before discharge from postnatal wards are admitted to the neonatal unit; infants who are discharged home after delivery and subsequently return for suspected bacterial infections are hospitalized in the general pediatric wards. Investigation and treatment of neonates and young infants with suspected invasive bacterial disease were conducted according to standard of care by attending physicians. Investigations included complete blood cell counts and blood cultures for all infants. Lumbar punctures (to obtain cerebrospinal fluid [CSF] samples for biochemistry, microscopy, and antimicrobial drug sensitivity testing and culture) were limited to infants with GBS-positive cultures of blood samples obtained at birth and to all infants admitted from the community for suspected sepsis. Sterile-site cultures were processed at the National Health Laboratory Service (NHLS). Blood cultures were evaluated by using the BacT/Alert microbial system (Organon Teknika, Durham, NC, USA). GBS isolates were retrieved from NHLS, stored at −70°C, and serotyped by latex agglutination (15). During the surveillance period, empiric treatment for suspected sepsis consisted of intravenous penicillin and gentamicin for neonates and ampicillin and gentamicin for infants 1–12 months of age; case-patients with suspected meningitis received ampicillin and cefotaxime empirically.
Maternal screening for rectovaginal GBS colonization during pregnancy is not routinely performed in public health facilities in South Africa. Before 2007, CHBAH IAP guidelines recommended administration of intravenous ampicillin (1 g/6 h) and oral metronidazole (400 mg 3×/d) for suspected chorioamnionitis and prolonged rupture of membranes. In January 2007, targeted risk-based IAP was implemented for possible GBS infection in women with preterm labor, a previous infant infected with GBS, or a GBS-positive culture; treatment consisted of an initial 2-g dose of intravenous ampicillin, followed by intravenous ampicillin (1 g/4 h) until delivery. During the surveillance period, 10.5% of women received IAP during labor (16).
Infants 0–90 days of age who were admitted to CHBAH with GBS isolated from a normally sterile site were identified through screening of ward admissions and microbiological records within 24 h of identification of GBS. We also undertook an audit of the NHLS database to identify all invasive pathogens isolated from infants over the study period. Invasive GBS disease was categorized as bacteremia if identified in blood only and as meningitis if identified from CSF or if there was CSF cytologic evidence of purulent meningitis (>5 leukocytes/mm3; adjusted in traumatic lumbar punctures to allow 1 leukocyte/500 erythrocytes) in an infant with GBS bacteremia.
Demographic, birth, maternal HIV infection status, and other clinical data were abstracted from infants’ medical records by study doctors. HIV exposure was determined by abstracting antenatal HIV test results of mothers and supplemented by HIV ELISA results from maternal or infant blood tests conducted by attending physicians. The HIV infection status of HIV-exposed infants was determined by using a qualitative HIV PCR at the discretion of the attending physician.

Incidence was calculated as cases per 1,000 live births. Administrative live birth data from CHBAH and community clinics for Soweto and HIV prevalence survey data for the surveillance period were used to determine population denominators for HIV-infected and -uninfected women. Established patient referral protocols limited the chance that neonates, especially newborns, living outside the hospital catchment area were admitted to CHBAH. A sensitivity analysis of incidence was undertaken to account for GBS case-patients for whom maternal HIV status was unknown. For overall and annual incidence calculations, we attributed the prevalence of HIV exposure among case-patients with known exposure status to case-patients with unknown exposure status. Alternate sensitivity analyses assumed all cases with unknown maternal HIV status were HIV-exposed or, conversely, HIV-unexposed.
On the basis of 2012 population data for number of live births in South Africa (1,168,403) (17) and national prevalence of HIV infection in pregnant women (29.5%) (18), we used our study data to estimate annual national number of invasive GBS cases and deaths and stratified estimates by HIV exposure. We estimated the number of annual vaccine-preventable invasive GBS cases and deaths in South Africa on the basis of the conservative assumption that administration of GBS-CV to pregnant women (19) would not protect against invasive GBS disease in infants born at <33 weeks’ gestation, and we adjusted for the proportion of serotypes included in the current experimental trivalent GBS-CV (Ia, Ib, and III) and a future pentavalent vaccine (addition of serotypes II and V). These estimates were based on hypothetical vaccine efficacy assumptions of 75.0% for the overall population; 85.0% for HIV-unexposed infants; and 65.0% for HIV-exposed infants, as determined on the basis of the lower immunogenicity of trivalent GBS-CV in HIV-infected pregnant women (19).
Proportions were compared by using the χ2 and Fisher exact tests, as appropriate; Wilcoxon rank sum test (nonparametric) was applied for continuous variables. Univariate analysis was performed to determine factors associated with GBS-related death. Two-sided p values <0.05 were considered statistically significant, and 95% CIs were calculated. Analyses were conducted by using STATA/IC 13.0 (StataCorp, College Station, TX, USA).

The study was approved by the Human Research Ethics Committee, University of the Witwatersrand (M03–10–07 and M10–367) and the institutional review board of the Centers for Disease Control and Prevention. Mothers of infants prospectively identified with invasive GBS disease signed informed, written consent. Consent was waived by the ethics committees for retrospective review of records of cases identified after discharge or death of the infant. 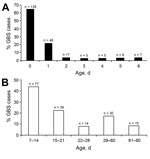 Factors Associated with Death among Infants with Invasive GBS

Antimicrobial drug sensitivity profiles were available for 385 (98.9%) of 389 isolates; all were penicillin sensitive. Macrolide resistance was prevalent in 15 (5.5%) of 273 of isolates.

We estimated ≈3,178 invasive GBS cases and 549 GBS-associated deaths among South Africa’s 2012 birth cohort (Table 2). For HIV-unexposed and -exposed infants, these estimates represent ≈1,639 and 1,544 cases and 283 and 266 deaths, respectively. On the basis of the predefined estimated efficacy of trivalent GBS vaccine to protect infants born at >33 weeks’ gestation, we estimated that, each year, 1,230 cases of invasive GBS disease and 163 deaths could be prevented in HIV-unexposed infants and 886 cases and 117 deaths could be prevented in HIV-exposed infants (Table 2).

We thank the staff of Departments of Obstetrics, Neonatology, and Paediatrics at CHBAH for their dedication to their patients, including our study participants. We also thank Mannikhant Khoosal for assisting with sample collection and logistical support; Suzett Fourie, Veebha Gosai, Razia Hassan Moosa, Waasila Jassat, Stephanie Jones, Anthonet Koen, Marianne Kohler, Martin Laque and Albert Maribe for collection and analysis of data; and Mashudu Madzivhandila for sample processing.
This study was supported by the United States Agency for International Development, the National Vaccine Program Office, and the Antimicrobial Resistance Working Group of the Centers for Disease Control and Prevention (cooperative agreement nos. U50/CCU021960 and 5U01CI000318), and the Bill and Melinda Gates Foundation (grant no. 39415). Additional funding was provided by the Respiratory and Meningeal Pathogens Research Unit of the South African Medical Research Council.
The CHBAH Respiratory and Meningeal Pathogens Research Unit receives institutional grant support related to GBS from Novartis. S.A.M., C.L.C., and M.J.G. are clinical investigators in the Novartis GBS conjugate vaccine program.