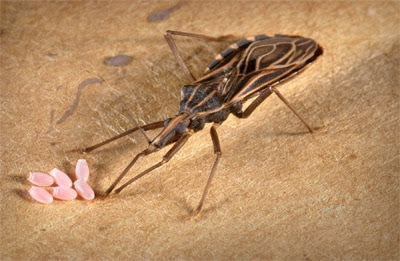 An adult triatomine, or kissing bug, with eggs. Triatomines transmit the parasite that causes Chagas disease.Photo by CDC/Jim Gathany
Most people think parasitic diseases occur in poor and developing countries, or are infections they might pick up on a trip to a foreign country. However, parasitic infections also occur in the United States, and in some cases affect millions of people. Often they can go unnoticed, with few symptoms. But many times the infections cause serious illnesses, including seizures, blindness, pregnancy complications,, heart failure, and even death. Anyone—regardless of race or economic status—can become infected.
CDC has targeted five neglected parasitic infections (NPIs) in the United States as priorities for public health action based on the numbers of people infected, the severity of the illnesses, or our ability to prevent and treat them. These NPIs include Chagas disease, cysticercosis, toxocariasis, toxoplasmosis, and trichomoniasis.
Parasitic infections affect millions around the world causing seizures, blindness, infertility, heart failure, and even death,” said CDC Director Tom Frieden, M.D., M.P.H. “They’re more common in the US than people realize and yet there is so much we don’t know about them. We need research to learn more about these infections and action to better prevent and treat them.”
In a recent special supplement to the American Journal of Tropical Medicine and Hygiene

, CDC scientists discuss NPIs and their differing epidemiologic profiles, modes of transmission, and prevention and control strategies. The articles also highlight the shared characteristics of the diseases, including the large numbers of people in the United States who are believed to be at risk, the potential for underreporting and misdiagnoses because of lack of physician awareness and optimal diagnostics, and the lack of interventions to prevent or treat disease.
The estimates of the burden of NPIs and their impact include:
The good news is that most parasitic infections can be prevented, and many are treatable. However, these infections are often undetected and untreated because most people do not know they are infected or at risk, or don’t have access to appropriate care. Doctors are often unfamiliar with these parasitic infections, and therefore may not diagnose or treat them appropriately.
“The perception that parasitic diseases are no longer relevant or important is a major impediment to implementing currently available control and prevention strategies,” the authors note. “The NPIs in the United States are part of the global burden of parasitic diseases, and strategies that reduce or eliminate them in the United States can someday be applied globally.”
CDC is working to protect people from these health threats by:
For more information on neglected parasitic infections visit http://www.cdc.gov/parasites/npi
A digital press kit is available at: http://www.cdc.gov/media/dpk/2014/dpk-npi.html
###U.S. DEPARTMENT OF HEALTH AND HUMAN SERVICES