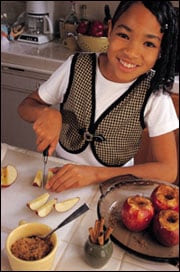 Be food safe
Studies over many years have found antibiotic-resistant organisms, such as methicillin-resistant Staphylococcus aureus(MRSA), in a variety of food products including retail meats and raw milk. While more study is needed to understand whether MRSA in foods and food animals plays a role in human infection, to date, there have not been any documented cases of people getting MRSA from eating food that contains MRSA.  Rather, MRSA is usually spread directly from person to person.
It is important to note that appropriate handling and cooking of raw meat should eliminate any risk of transmission to people.  Handling and cooking recommendations can be found at CDC's Be Food Safe.
A variety of common food-borne diseases are known to be transmitted from drinking raw milk; however, no cases of illness caused by either antibiotic-susceptible or antibiotic-resistantStaphlyococcus aureus are known to have occurred in the United States from this source. Nonetheless, pasteurization of milk should eliminate any MRSA that might be present in unpasteurized (raw) milk.
Most MRSA cases are skin and soft tissue non-life-threatening infections that are spread between people in the community through skin-to-skin contact. Such cases of MRSA occur, mostly in populations with frequent skin-to-skin contact (e.g. families, contact sports teams, military barracks, prisons). The vast majority of the estimated 94,000 life-threatening MRSA infections annually are associated with medical care.
Antibiotic susceptible Staph. aureus is a common cause of bovine mastitis in dairy cattle, although the strains causing disease in these animals are different from those usually causing disease in humans. MRSA infections have previously been found in animals including pigs, cats, dogs and horses. Transmission of MRSA has been documented between farm or companion animals with MRSA and people who were in close contact with the animals. In these cases, it is believed that transmission resulted from direct (e.g.skin-to-skin) contact.
Preventing MRSA infections is a high priority for CDC. The federal government uses several complementary systems to track drug-resistant infections and drug-resistant bacteria, including MRSA, in humans as well as in animals and food. The National Antimicrobial Resistance Monitoring System (NARMS) is collaboration among the CDC, FDA-CVM, and USDA. NARMS specifically targets drug resistance in bacteria more commonly associated with foodborne disease. Through the NARMS program, the FDA-CVM is currently conducting a  pilot study to measure MRSA in meat items purchased from retail establishments.
CDC is actively working to reduce MRSA infections in the United States through intensive efforts with healthcare providers to improve infection control practices and prevent HAIs. CDC also continually monitors the occurrence of MRSA and other infections in the population. CDC’s work provides the foundation for national and local healthcare-associated prevention efforts.  For more information visit CDC's MRSA website.
For more information on preventing MRSA in community and healthcare settings please visit CDC's MRSA website and Preventing MRSA Infections in Healthcare Settings.
For more information on food safety, please visit foodsafety.gov.