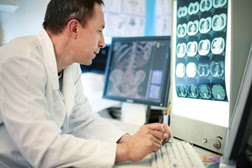 Guillain-Barré Syndrome (GBS), is a rare disorder in which a person's own immune system damages the nerves, causing muscle weakness and sometimes paralysis. GBS can cause symptoms that last for as little as a few weeks, or go on for several months. Most people recover fully from GBS, but some people have nerve damage that does not go away. In rare cases, people have died of GBS, usually from not being able to breathe due to weakness of their breathing muscles.
While it is not fully known what causes GBS, it is known that about two-thirds of people who get GBS do so several days or weeks after they have been sick with diarrhea or a lung or sinus illness. An infection with the bacteria Campylobacter jejuni, which can cause diarrhea, is one of the most common illnesses linked to GBS. Although rare, people can also get GBS after having the flu or other infections such as Epstein-Barr virus.