A single mosquito bite can make you sick. Why take a chance? Use repellent on yourself, your friends and your family.
Update on the 2012 West Nile Virus outbreak

Encephalitis refers to an inflammation of the brain, meningitis is an inflammation of the membrane around the brain and the spinal cord, and meningoencephalitis refers to inflammation of the brain and the membrane surrounding it. Almost 13,000 of the individuals who have been reported as having West Nile virus since 1999 have been seriously ill, and more than 1,200 have died.
Another problem in some parts of the United States and many places in the tropics is dengue. The World Health Organization estimates there may be 50 – 100 million dengue infections in the world every year. Over 2.5 billion people are at risk of getting infected with dengue virus.
The reasons one person becomes severely ill from diseases mosquitoes carry and another doesn't are not entirely known, but why take a chance?
Control what you can. Improve your odds of avoiding mosquito spread viruses by using a repellent on exposed skin and clothes while outdoors.

Insect Repellent: It keeps you from being what’s for dinner.

There are always excuses for not using repellent— forgot it, didn't want to go back and get it, it doesn't smell good, it's not in the budget, or "mosquitoes don't bite me"… 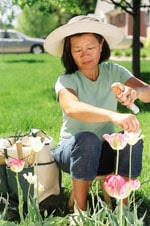 Think of repellent as you would an important article of clothing, and increase your chances of avoiding weeks (or even months) of aches and fatigue that come with West Nile fever, dengue fever, or any number of other mosquito borne diseases. More severe problems are possible. Being hospitalized with swelling of the brain, or even worse, are possibilities from many of these diseases.
What repellent should I use? CDC recommends a variety of effective repellents. The most important step is to pick one and use it. There are those that can protect you for a short while in the backyard or a long while in the woods. DEET, picaridin, IR3535 and the plant-based oil of lemon eucalyptus are all repellents recommended by CDC. All contain an EPA-registered active ingredient and have been studied to make sure they are effective and safe. EPA has a long listing of repellent brands in the United States. Check out CDC’s traveler’s health page on repellents here.
When should you wear repellent? Mosquitoes can bite anytime. Most of the mosquitoes that carry West Nile virus bite from around sundown to around sun-up (throughout the night). Put a few bottles or packets of repellent around—in the car, by the door, in a purse or backpack. View map of West Nile virus infections occurring in 2012.See also detailed case counts by state.
Where are mosquitoes a problem? Almost all of the continental United States has had reports of people getting sick with West Nile virus. But there are areas of the United States where people are more likely to get severely ill, and these areas can change from year to year. The map at the right shows West Nile virus activity by state. Outbreaks of Eastern equine encephalitis (EEE), LaCrosse encephalitis, and St. Louis encephalitis are not as common as West Nile virus, but outbreaks can be severe. EEE has been a significant problem in the North East in recent years. Texas, Florida, and Hawaii have all reported people ill with dengue in recent years. Every year, Puerto Rico reports

[PDF - 240KB] people getting ill with dengue virus.
What to do about mosquitoes in my area? Mosquito control by your local government won't get rid of every last mosquito, but when you also use repellents, you can markedly reduce your chances of getting bitten. Ask local officials about starting a mosquito control program in your city or county if it doesn't exist already.