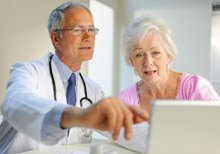 Comparing Models that Assess Breast Cancer Risk
A new study found that models for assessing breast cancer risk perform only slightly better when they include common inherited genetic variants recently linked to the disease. For now, recommendations for breast cancer screening or treatments that are based on such models will remain unchanged for most women.

The researchers combined data from 5 different studies that included over 5,500 breast cancer patients and almost 6,000 women without cancer. The women were predominately white and between the ages of 50 and 79. For each participant, the researchers assembled information on established risk factors and on 10 SNPs recently found to be associated with breast cancer risk.

Next, the investigators examined the performance of the Gail model, the most commonly used breast cancer risk model, for this group of women. The Gail model uses information on a woman's medical and reproductive history, as well as the history of breast cancer among her close relatives (mother, sisters and children), to provide an estimate of a woman’s risk of developing invasive breast cancer within the next 5 years and over her lifetime.

As reported in the March 18, 2010, New England Journal of Medicine, when the investigators tested the accuracy of a model based only on SNPs, they found that it performed as well as the Gail model. However, an inclusive model, using both SNPs and Gail factors, performed only slightly better than either model alone.

For most women in the study, the inclusive model didn’t substantially change the estimated risk of developing breast cancer beyond the Gail model calculations. It did reclassify the risk category for about half the women, but the shifts from one category to another were generally too small to influence clinical decisions.

"In the past 3 years, genome-wide association studies have identified multiple common genetic variants associated with breast cancer," Wacholder says. "When we included these newly discovered genetic factors, we found some improvement in the performance of risk models for breast cancer, but it was not enough improvement to matter for the great majority of women."

However, Wacholder points out that scientists are still at an early stage in understanding the inherited components of breast cancer risk. "We can expect to identify more genetic determinants of breast cancer, and to learn more about those we have already found," he says. "This information, along with our increasing knowledge of non-genetic factors, should allow us to steadily improve our risk prediction models for breast cancer."
http://www.nih.gov/researchmatters/march2010/03292010cancer.htm