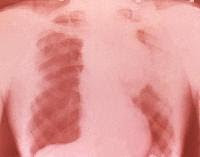 Lung cancer is the most common cancer in the world and the survival rate among diagnosed patients is poor. The majority of lung cancer cases are non-small cell lung cancers (NSCLC) and usually surgical removal is the first line of treatment. An important factor in improving survival of these patients is identifying those that will benefit from additional chemotherapy following this procedure, i.e. those with more aggressive tumours, in whom the prognosis for a cure based on surgery alone is poor. Selecting such individuals is based on assessing risk factors that can be measured after surgery such as tumour stage, residual tumour mass and vascular invasion among others. However, these methods are not always successful at distinguishing patients who will need additional therapy from those for whom the prognosis is good.

The review evaluated studies published between January 2002 and February 2009, and identified 16 articles that were relevant. The studies were then evaluated against a number of criteria including appropriateness of study design, statistical validations and medical utility for the new signatures beyond that obtained using existing treatment guidelines. None of the studies succeeded in showing improvements in predictive power over known risk factors. The authors conclude that studies which are investigating prognostic factors need to be designed with a focus on intended use and proposed a set of guidelines to aid their design and analysis. The guidelines cover areas such as defining objectives, data collection and reporting, statistical analysis and presentation of results and importantly demonstrating clear medical utility.

Comment: The findings do not necessarily show that gene expression profiling cannot improve prognosis for this group of lung cancer patients – merely that there is not sufficient evidence to demonstrate it. Given the financial investment in such research, it seems only sensible that more thought should be given to optimal study design and reporting. Similarly, although the technique has shown considerable promise for breast cancer prognosis, to the point where there has been significant commercial development, reliable scientific evidence of clinical benefit has been hard to come by (see previous news). Of course, the technique which has shown considerable prognostic promise for breast cancer – may not be effective for all types of tumour. However, generating reliable evidence as to the efficacy (or otherwise) of this sort of clinical tool certainly requires careful thought – in this instance, improved study design and reporting.
http://www.phgfoundation.org/news/5311/