DTBE Image Library Photo Contest
This year we had many entries for the DTBE Image Library photo contest. There were so many good entries that we decided to choose first-, second-, and third-place winners. The winning photos were chosen based on image quality, composition, and value or appropriateness to the division. All photos submitted for the contest were judged by division staff with photography, TB laboratory, communication, and public health experience.

We are pleased to announce that Dr. Sundari Mase of the Field Services and Evaluation Branch is the first-place winner, and Dr. Wanda Walton of the Communications, Education, and Behavioral Studies Branch wins second and third place in the DTBE Image Library Photo Contest. 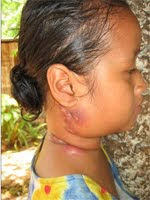 This is a photo of a patient with multidrug-resistant (MDR) TB in Chuuk before treatment. The photo shows an 11-year-old female MDR TB contact who presented with cough, fever, night sweats, and massive right cervical lymphadenopathy. The patient was placed on an MDR TB treatment regimen and is currently much improved with no further symptoms.

The first-place image was taken by Sundari while she was working in Micronesia as an MDR TB clinical consultant and for the study following up the MDR TB contacts on LTBI treatment. The Federated States of Micronesia (FSM) is an independent country, made up of four states, located in the Western Pacific. It is currently affiliated with the United States by a Compact of Free Association. Chuuk is the largest of the four states with a population of 55,000. During 2007, the TB incidence rate in Chuuk was 127 cases per 100,000, 30-fold higher than the U.S. rate (4.4 per 100,000). The first known MDR TB case in Chuuk was reported in December 2007. By April 2008, four deaths from MDR TB had been reported. On May 15, 2008, FSM requested CDC assistance in investigating these cases of MDR TB.

Photo Contest 2nd and 3rd Place
(see the full-ext please)
The second- and third-place images were taken by Wanda while she was working in Nepal. Approximately 107,000 Nepali-speaking residents of Bhutan have been confined to seven refugee camps in southeastern Nepal since 1990. With almost 2 decades of failed initiatives to return or locally integrate them, the resettlement program in Nepal began in 2008 with the United States agreeing to resettle approximately 60,000 Bhutanese refugees over the next 5 years.

Before entry into the United States, these applicants are required to undergo medical screening for diseases of public health significance, referred to as inadmissible conditions, which includes infectious TB. In August 2009, Wanda was a member of an evaluation team which traveled to Damak, Nepal. The team included representatives from CDC’s Division of Global Migration and Quarantine and DTBE, in partnership with two consultants external to CDC and a member of Citizenship and Immigration Canada (CIC). The purpose of this program evaluation was to provide an objective, in-depth, and sensitive assessment of the International Organization for Migration’s operation within Nepal in relation to the application of the new TB Technical Instructions for detection and treatment of TB in this refugee population.