Better data collection, analysis reduces apparent declines in death rates in very old
Human error, not human biology, largely accounts for the apparent decline of mortality among the very old, according to a new report publishing on December 20 in the open-access journal PLOS Biology by Saul Newman of Australia National University in Canberra. The result casts doubt on the hypothesis that human longevity can be greatly extended beyond current limits. 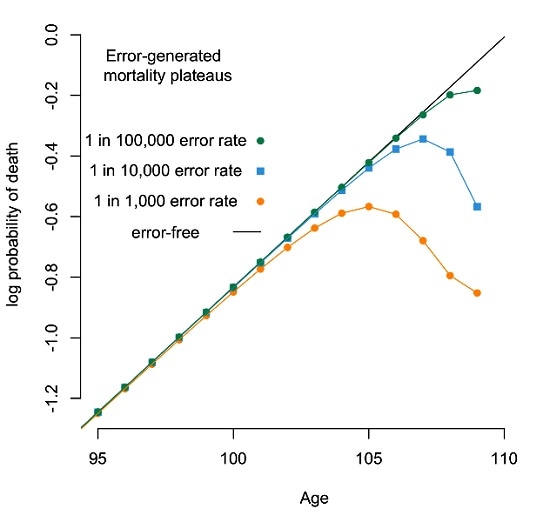 Late-life mortality plateaus are generated if symmetrical errors (colored points) are seeded into error-free log-linear models (black line). Credit: Saul Justin Newman
As we age through adulthood, the probability of dying increases year after year. But studies in multiple species, including humans, have suggested that, at the far end of the lifespan, the rate of increase slows, or even plateaus. Biological explanations for such late-life mortality deceleration have been developed, but are controversial, and a role for statistical error has also been proposed.
In the new report, Newman shows that a variety of errors, individually and combined, have the effect of producing a slowing of apparent mortality at the end of the lifespan, and can largely explain away the observed trends. Categories of error include those in demographic sampling, birth and death records, age reporting, and others.
For instance, random errors in reporting of age within a population will result in some younger individuals being mistakenly recorded as older, and vice versa. As this population ages, older individuals mistakenly recorded as younger will die earlier than expected, but those mistakenly recorded as older will die later, enriching the pool of very old individuals and flattening the mortality curve.

Newman found that an error rate of as low as one in ten thousand would be sufficient to produce the observed declines in apparent age-related mortality. Furthermore, he was able to show that an improvement in data quality in large population studies corresponded with a reduction in late-life mortality deceleration.
“These findings suggest that human late-life mortality plateaus are largely, if not entirely, artefacts of error processes,” Newman concludes. The finding has important consequences for understanding human longevity, since predictions that lifespan can be greatly increased have depended in part on the apparent decelerations and plateaus previously reported in the biological and demographic literature.
In a separate short paper, Newman asked whether such errors might even explain away the late-life mortality plateau reported in a recent high-profile paper published in Science Magazine earlier this year by Elisabetta Barbi, Kenneth Wachter and colleagues – that paper used a high-quality dataset of nearly 4,000 death records from Italy to show that death rates decelerate after the age of 80 and plateau after 105. Newman calculates that this apparent effect could still be down to plausible error rates in record-keeping. In a response to this, Wachter defends the quality of their dataset, and describes Newman’s proposed error rate as “wildly implausibly high.”
Newman does note that in at least one species, the fruit fly, an observed late-life mortality plateau does not seem to be due to error, and may require a biological explanation. “Discriminating between real and artefactual cases will require careful case-by-case analysis, and will constitute an ongoing challenge in the study of aging.”
Source:
https://www.plos.org
Publicado por salud equitativa en 11:56