By Sally Robertson, BScJune 20, 2018
Researchers from Osaka University have discovered how precancerous cells spread to normal tissue and cause cancer, which could help scientists understand the initial stages of tumor progression. 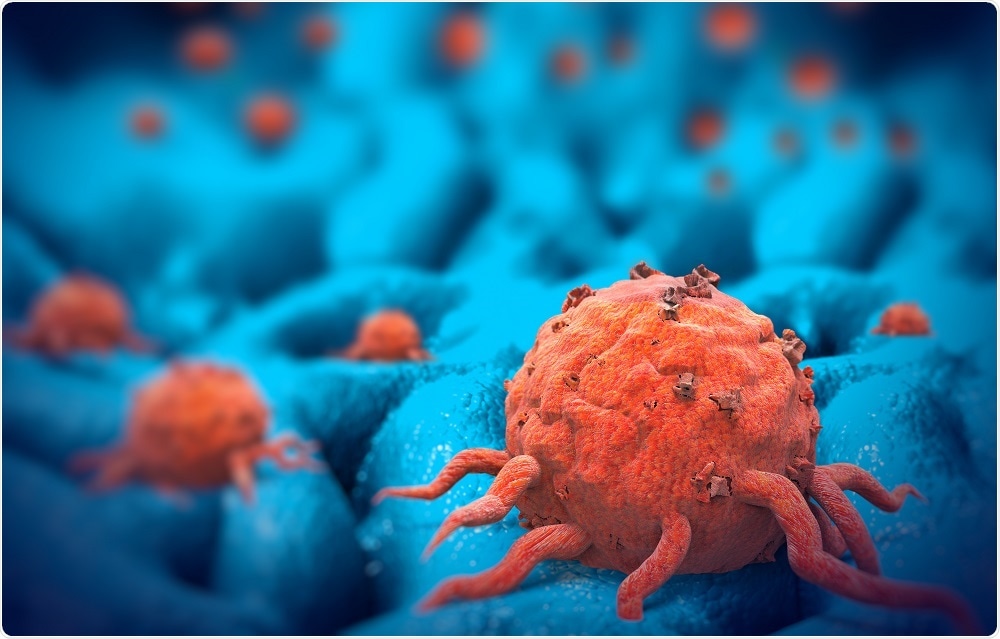 Image Credit: Giovanni Cancemi / Shutterstock
In multicellular tissues, cells adhere to each other, with the intestinal epithelia and skin packing cells into a hexagonal pattern and cells tightly adhering to the six cells next to them. The maintenance of bodily functions depends on this adhesion network being kept intact.
During the first stage of tumor progression, precancerous cells (oncogenic mutant cells) and healthy cells compete for space in the adhesion network of healthy tissues.
However, scientists have not yet been able to describe how the mutant cells selectively occupy this space. They had thought that the precancerous cells undergo cell division and multiply at a faster rate than normal cells, but this has not been verified.
Now, the current study has employed computer simulation and experimental verification to assess the state of the precancerous cells in healthy multicellular tissues.

In simulations used in this study, modeling is developed based on shape analogies between cells of a multicellular tissue and soap bubbles (polygons).
Cells and bubbles are composed of different molecules, but they share the ability to produce physical properties such as surface tension.
By incorporating biological knowledge into simulations, we were able to predict new phenomena and mechanisms.”
Alice Tsuboi, Lead Author

As reported in the journal Current Biology, the team found that only the mutant cells selectively expanded their area without cell division after healthy cells died, occupying the space made available by apoptosis.
They also found that the mutant cells expanded through rearrangement of the adhesion network in favor of mutant cell expansion.
When normal cells were repeatedly removed and the adjacent cells rearranged, hundreds of cells in the tissue transformed into mutant cells within a few hours.
The findings are hoped to promote understanding of the initial stage of tumor progression, where precancerous cells spread to healthy tissues and cause cancer.
In addition, applications will be found for multicellular tissue research based on prediction via computer simulation and experimental verification, ranging from research into the normal development of organisms through to the development of disease.
Source:
https://www.alphagalileo.org/en-gb/Item-Display/ItemId/165197?returnurl=https://www.alphagalileo.org/en-gb/Item-Display/ItemId/165197
Publicado por salud equitativa en 7:37