First description of mEAK-7 gene could suggest path toward therapies for cancer, other diseases | UCLA

First description of mEAK-7 gene could suggest path toward therapies for cancer, other diseases | UCLA

First description of mEAK-7 gene could suggest path toward therapies for cancer, other diseases 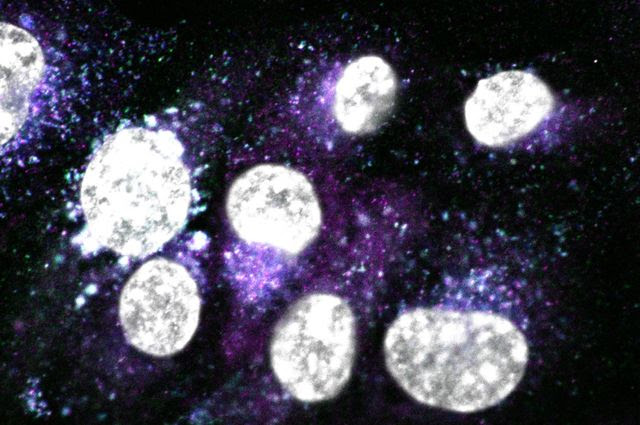 Microscopic image of cancer cells expressing the mEAK-7 gene, which was described in research led by UCLA’s Dr. Paul Krebsbach.


For years, researchers have known that a gene called EAK-7 plays an important role in determining how long worms will live. But it remained unclear whether the gene had a counterpart in humans and – if it did – how that human version would work.
Now, researchers led by UCLA’s Dr. Paul Krebsbach are the first to characterize the mechanism of the human equivalent, which they call mammalian EAK-7, or mEAK-7.
Krebsbach, dean of the UCLA School of Dentistry and a professor of periodontics, led a team that found mEAK-7 regulates the molecular process, or “metabolic pathway,” that dictates cell growth and human development.
The disruption of those processes is part of what causes cancer and other diseases, as well as some neurological disorders. Findings from the study could be a preliminary step toward new therapies that would work by slowing or blocking mEAK-7’s molecular process, which in turn could potentially control the spread and growth of the cells responsible for those diseases.
The research was published in the journal Science Advances.
The researchers began studying EAK-7, the worm gene, in 2013, when Krebsbach was a faculty member at the University of Michigan. Knowing about its important role in worms, the team wanted to understand if it played a role in human biology, and whether it could provide insight on why certain human cells become stem cells.
Joe Nguyen, the study’s lead author, said the team essentially stumbled on the link between EAK-7 and its human counterpart after their initial hypothesis about that connection proved incorrect. 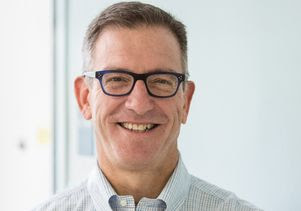 Chris Flynn/UCLA Dentistry
Dr. Paul Krebsbach
Once they identified mEAK-7 in human cells, they screened several types of human cells — including embryonic stem cells and fibroblasts, the cells that form connective tissues and aid in wound healing — to better understand how the gene worked.
“We didn’t detect mEAK-7 in any of those samples,” said Nguyen, a D.D.S./Ph.D. candidate at the University of Michigan. “But what we did find was astonishing. When we tested for mEAK-7 in various cancer cells, we found that there was a notably high concentration of mEAK-7 protein.”
The researchers ran a series of tests on human cells to see how mEAK-7 responded to a biological process known as mTOR signaling, which regulates cell metabolism, growth, duplication and survival in humans.
According to Krebsbach, what they found was even more astonishing than the uncovering of mEAK-7 itself. The gene actually activated another biological process, which the researchers call an alternative pathway, one that was not as well understood at the molecular level as mTOR.
In effect, the discovery was like realizing that a driver (the mEAK-7 gene) had exited a freeway (the mTOR pathway) and chosen to travel little-known surface streets (the alternative pathway) to reach his destination.
“With the discovery of mEAK-7’s activation of this alternative process, we demonstrated that cell metabolism, division and migration may be more dependent on the type of cell than was previously understood,” Krebsbach said. “If we can find a way to control the duplication and migration of cells, including those responsible for human disease, we may be able to create opportunities for new therapies.”
To support their findings, the scientists tested the significance of mEAK-7’s role in cell proliferation and migration by inhibiting the gene in living human cells. When they mutated mEAK-7 or removed it from those cells, there was a dramatic reduction of those processes. They also tested a scenario in which mEAK-7 was overexpressed in cells and found that the proliferation of those cells increased significantly.
“By chance, we have found that mEAK-7 is crucial for mTOR signaling and is required for cell proliferation and migration,” said Jin Koo Kim, a UCLA Dentistry researcher. “By targeting mEAK-7, we could potentially control the diseases that hijack mTOR signaling through this alternative pathway.”
The study was made possible in part by the National Institute of Dental and Craniofacial Research and the Stuart and Barbara Padnos Research Award from the Comprehensive Cancer Center at the University of Michigan. The authors have no competing interests.
Publicado por salud equitativa en 8:22