By Dr. Jonas Wilson, MD, Ing. Med.
An important group of proteins responsible for cell cycle regulation are known as cyclin-dependent kinases (CDKs) and one member of this family is CDK9. 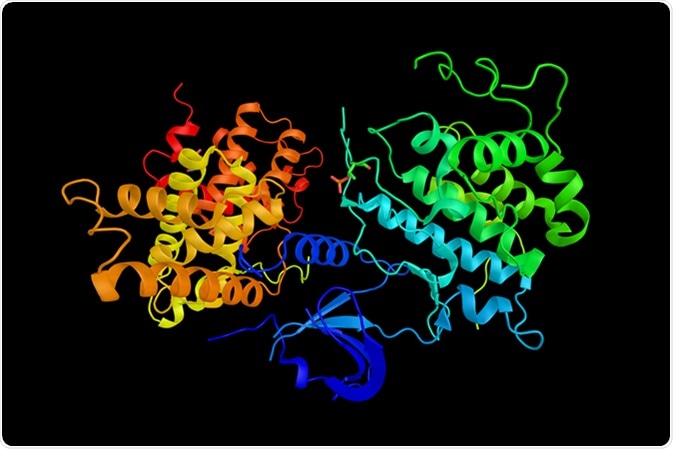 Cyclin-dependent kinase 9, a cyclin-dependent kinase associated with P-TEFb. Involved in differentiation of skeletal muscle. 3d rendering. Image Credit: ibreakstock / Shutterstock
This member has been found to be a constituent of TAK/P-TEFb, which is a multiprotein complex, and is an elongation factor during transcription that is directed by RNA polymerase II.
It conducts its functions by the phosphorylation of the largest sub unit C-terminal domain of that RNA polymerase II. A complex is formed with this protein and cyclins T or K. In addition to cancer, there are other diseases that have been postulated as being associated with CDK9, including laryngeal tuberculosis, central nervous system vasculitis and HIV.

Cancer and the Cell Cycle

A fundamental feature of cancer is its association with the dysregulation cell cycle control. The cell cycle, under normal circumstances, is a series of events that are tightly guarded by a number of checks and balances. Crucial to these controls are CDKs that are paired with cyclins, which are responsible for particular segments of the cell cycle.
They are thus named according to the stage of the cell cycle for which they are liable. Cyclin synthesis and degradation with corresponding CDK activation and inactivation, together with phosphorylation and de-phosphorylation, is necessary for progression through the cell cycle and its proper functioning, especially in cases where cells should not be allowed to progress if they are defective in any way.

CDK9 expression, as well as its cyclin T activators, is found in all tissues throughout the body, whereas cyclin K is predominantly expressed in the stomach, testes and bone marrow. There are two isoforms of CDK9, namely a 42KDa and a 55kDa protein, which are localized differentially. CDK9 is suggested as a promising target in oncology primarily on the basis of its ability to regulate the transcription of anti-apoptotic short-lived proteins. Inhibiting CDK9-mediated phosphorylation restores the apoptotic capabilities of oncogenic cells, thereby allowing the defective cells to undergo programmed cell death and be removed from the body.
At present, studies seem to suggest that there is compelling evidence to implicate CDK9 in oncogenic therapy. These studies show that there are many segments on the sites for ATP binding within CDK9 that are more flexible than other members of the CDK family. Moreover, the anti-oncogenic effects of targeting CDK9, which is critical for maintaining elevated levels of anti-apoptotic short-lived proteins, are encouraging. This is because there is a subset of tumors that require CDK9-mediated survival benefits and to target CDK9 should theoretically deal a major blow to the cancers involved.
Reviewed by Hannah Simmons, BSc.