By Sanchari Sinha Dutta, PhD
Alzheimer’s disease (AD) is an irreversible brain disorder that usually starts around the age of 65 years.
Three major brain defects which are associated with AD include formation of amyloid plaques – which are composed of beta-amyloid peptide fragments; neurofibrillary tangles – which are abnormal clusters of tau protein inside neurons; and loss of connection between neurones which are important for memory and learning. 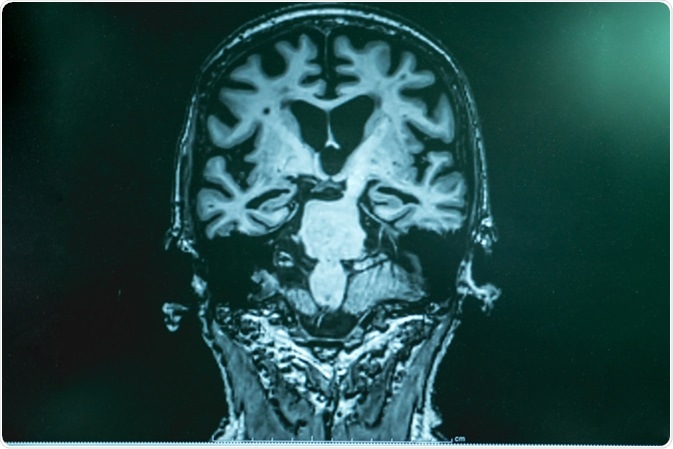 Alzheimer's disease with MRI. Image Credit: Atthapon Raksthaput / Shutterstock
Major signs and symptoms of AD include loss of memory, confusion, change in behavior and personality, and impaired decision-making and language skills. According to the recent estimation, about 13.8 million people are affected by AD worldwide.
Early-onset AD which generally starts between the age of 30 and 60 years, is caused by single-gene mutations on Chromosomes 21, 14, or 1. Each of these mutations ultimately leads to the formation of amyloid plaques, a hallmark of AD. It is relatively rare as compared to late-onset AD. The major genetic risk factor for late-onset AD is having ε4 variant of the apolipoprotein E (APOE) gene on Chromosome 19.

Presently, the most common biomarkers which are estimated in the cerebrospinal fluid (CSF) to diagnose AD include beta amyloid protein, tau protein, and phospho-tau. These biomarkers have >95% sensitivity and >85% specificity to detect AD. Due to its direct contact with the brain and spinal cord, CSF is considered as an important biofluid to search for biochemical and metabolic biomarkers against AD. However, the need for painful and invasive lumber puncture technique to obtain CSF makes it difficult to use, as well as calls for identification of new biomarkers which can be obtained easily through non-invasive or minimally invasive techniques.

To discover and establish new biomarkers for AD, researchers from around the world have set certain criteria. According to these criteria, an effective biomarker should have the following characteristics:
Since the signs and symptoms of AD gradually increase over time, a regular follow-up is essential to effectively manage the disease outcome. To maintain a regular follow-up, it is important to search for biomarkers in easily collectible biofluids, such as blood, urine, and serum. To date, circulatory biomarkers which have been identified through various research findings include:
Circulatory microRNAs (miRNAs) – These are non-coding RNAs which regulate expressions of many genes through post-transcriptional gene silencing. Analysis of miRNA expression pattern in peripheral blood serves as a potential diagnostic method to detect AD. For instance, miRNAs which have shown down-regulated expressions in AD patients include miR-34a, miR-81b, and let-7f, just to name a few.
Amyloid beta in blood – Although it is an established biomarker in CSF, many studies have revealed that analysis of amyloid beta level in blood could serve as a potential new strategy to diagnose AD. In this context, measurement of high-performance plasma amyloid beta biomarkers by immunoprecipitation coupled with mass spectrometry has shown promising outcomes. However, further studies are needed to establish amyloid beta as a stable blood-based biomarker, as the plasma level of this protein differs with patient’s age, lifestyle, experimental conditions, and type of the assay.
Inflammatory markers – Inflammatory markers such as cytokines, chemokines, growth factors, binding proteins etc. are considered as valuable biomarkers to evaluate AD. Some of these biomarkers include tumor necrosis factor (TNF)-receptor 1, TNF-α, interleukin β, interferon (IFN)-γ, and transforming growth factor (TGF)-β.
Oxidative stress markers – Since increased production of free radicals is a characteristic feature of degenerated brain, markers of oxidative stress have the potential to be used for AD diagnosis. Some of these biomarkers include free fatty acids, protein nitration products, DNA oxidation products, lipid peroxidation products, 4-Hydroxy 2 trans Nonenal (HNE), and advanced glycation end-products.
Reviewed by HH Patel, M.Pharm.