By Kate Bass BScMay 3, 2018
An embryo has been created in vitro from mouse stem cells cultured with a 3D scaffold. The resulting structure was remarkably similar to a natural mouse embryo. 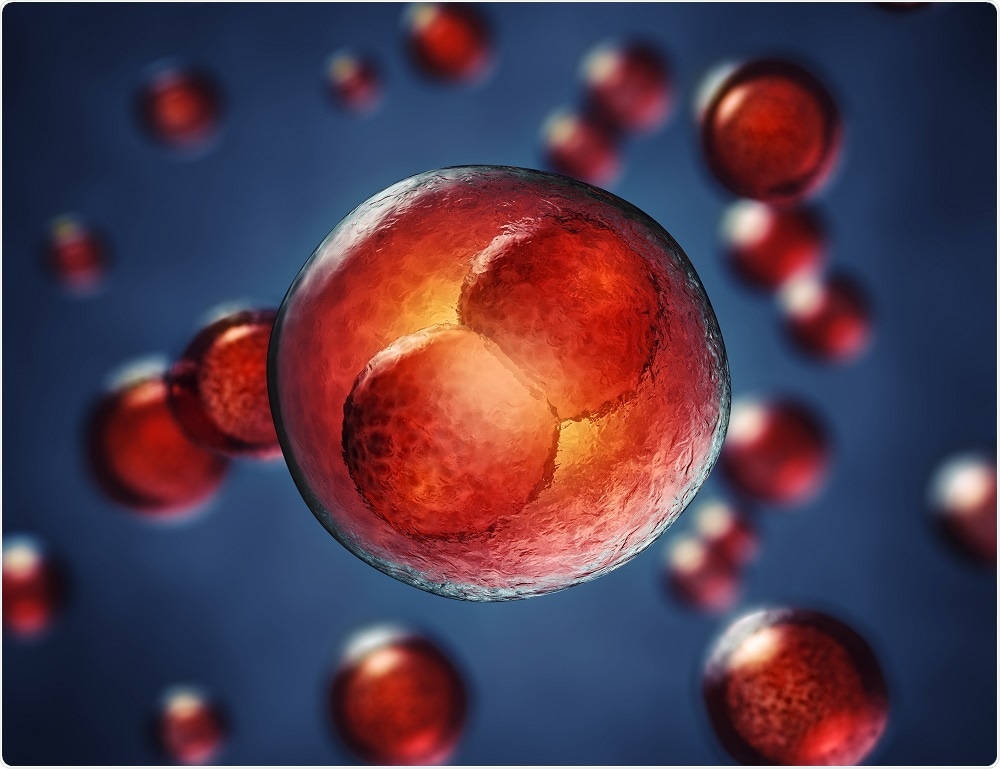 Credit: nobeastsofierce/Shutterstock.com
The embryo represents the very start of life. Soon after the male and female reproductive cells (sperm and egg, respectively) merge, cell multiplication begins to form an embryo.
This is called embryogenesis and is a critical part of conception orchestrated by a series of intricate interactions between embryonic and extra-embryonic tissues.
It is at this stage that more than two out of three human pregnancies fail. This is not surprising when such a complex mix of events must all complete in a precise manner for success.
There has been a lot of research into this stage of embryo development to try and determine the nature of the signals required for successful embryogenesis as it is thought that such knowledge may help women who repeatedly fail to conceive.
Embryogenesis begins with the formation of a small, free-floating ball of stem cells known as the blastocyst. This includes the embryonic stem cells (ESC) that will develop into the new being.
The other types of stem cells within the blastocyst are non-embryonic and go on to form the placenta (trophoblast stem cells; TSC) and the nutrient-providing yolk sac (primitive endoderm stem cells).
It is thought that the interactions between the embryonic and extra-embryonic cells or critical for embryogenesis since all attempts to culture embryo-like structures in vitrousing only ESCs have had limited success.
This week, researchers at The University of Cambridge reported that they have successfully grown a mouse embryo in vitro from a mixture of genetically-modified mouse ESCs and TSCs. The cells grew on a 3D extracellular matrix to form a structure capable of self-assembly, which very closely resembled the natural embryo.

Both the embryonic and extra-embryonic cells start to talk to each other and become organised into a structure that looks like and behaves like an embryo. It has anatomically correct regions that develop in the right place and at the right time."
Professor Magdalena Zernicka-Goetz, The University of Cambridge

This research not only confirms the hypothesis that that interactions between the different types of stem cell are important for embryo development, but also illustrates that the different cell types work in partnership to guide each other.
This guidance is essential for achieving the correct embryo shape and for activating key biological mechanisms in a timely manner.
The in vitro embryo was compared with a normally-developing mouse embryo and found to follow the same pattern of development. In both cases, the stem cells organised themselves with ESCs at one end and TSCs at the other.
Before the two groups of cells join, a cavity forms in each and this becomes the pro-amniotic cavity in which the embryo will develop.
The artificial system has not been optimised for the correct development of the placenta or to provide the nutrient-giving yolk sac. Consequently, the in vitro embryo will not be able to develop further into a foetus.
The team have, however, developed a method that enables a blastocyst to develop in vitro beyond the implantation stage.
This means that, for the first time, researchers can study the key stages of human embryo development up to 13 days after fertilisation. It is hoped that this technique will help overcome the shortage of embryos, which has been a major barrier to human embryo research.

We are very optimistic that this will allow us to study key events of this critical stage of human development without actually having to work on embryos. Knowing how development normally occurs will allow us to understand why it so often goes wrong."
Professor Magdalena Zernicka-Goetz, The University of Cambridge