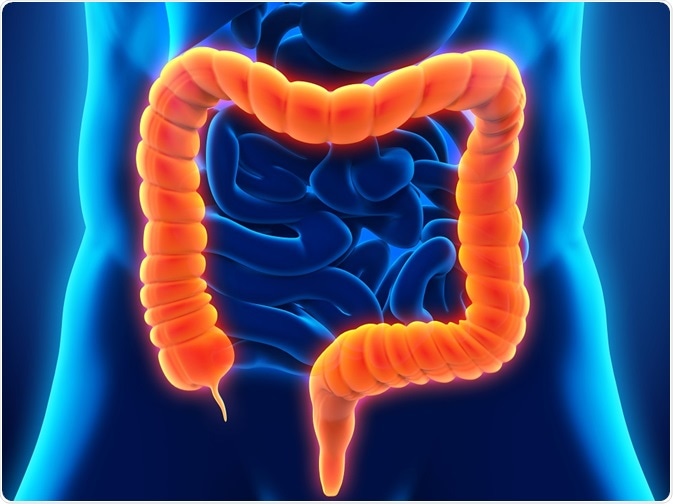 Credit: Nerthuz/Shutterstock.com
Gardner syndrome is a rare variant of familial adenomatous polyposis – a condition characterized by multiple benign tumors in the colon and rectum that can eventually turn into colorectal cancer.
The term ‘Gardner’ refers to the scientist, Eldon J. Gardner, who first described the syndrome in 1951. The disease occurs due to the mutations in Adenomatous Polyposis Coli (APC) gene – a tumor suppressor gene that encodes proteins responsible for controlling the cell division and growth. Mutation in this gene triggers uncontrolled cell growth that subsequently results in polyps or tumor formation.
Gardner syndrome is a rare disease, with a prevalence of only one in one million in the USA.  It is inherited as an autosomal dominant trait. It means that a person can develop the disease by receiving only one copy of the affected gene from one parent. However, it is not always a hereditary disease; instead, it can may also arise because of sporadic mutations in the APC gene.

Several molecular genetic tests that detect the mutation in APC gene are available to diagnose Gardner syndrome. These tests include genotyping, sequencing study, gene copy number analysis, and epigenetic testing. If a family history of the disease is known, carrier sequencing analysis is a good option for prospective parents, to find out if they are carriers of the disease-causing mutation. It is a vital step towards preventing disease transmission to the next generation.
Besides genetic testing, colonoscopy and X-Ray of the long bones and jaw bone are the routine examinations to diagnose Gardner syndrome. Detection of additional features like pigmented lesions in the retina, skin abnormalities, and polyps in the stomach and small intestine further supports the diagnosis of Gardner syndrome.

Since benign polyps in the colon and rectum appear at an average age of 16 years, regular screening of patients starts as early as age 10 years. If the symptoms left untreated, these polyps may turn into malignant tumors at an average age of 40 years.
Hence, annual screening is the best way to prevent the adverse outcomes of this disease. Annual checkups using colonoscopy, esophagogastroduodenoscopy, and routine physical examinations are the primary regimen of disease management.
Surgical removal of the colon is recommended in patients with multiple advanced polyps. These patients are generally prescribed with a nonsteroidal anti-inflammatory drug (NSAID), to treat remaining polyps.
For desmoid tumors, surgical removal or treatment with anti-estrogen, NSAIDs, and chemo and radio therapies are the recommended line of treatment. Epidermoid cysts are generally treated similarly as ordinary cysts, and sometimes require excision or steroid injections.

Intestinal polyps are the main concern for patients with Gardner syndrome because of their tendency to become cancerous. However, complete removal of the colon and most of the rectum increases the 5-year survival rate of the patients to nearly 100%. Symptoms like skin polyps or osteomas are primarily of cosmetic concern and should be treated to relieve the apparent discomfort.
Reviewed by Kate Anderton, BSc