Parents and doctors watch over a tiny heart | Health.mil

Parents and doctors watch over a tiny heart | Health.mil

Parents and doctors watch over a tiny heart 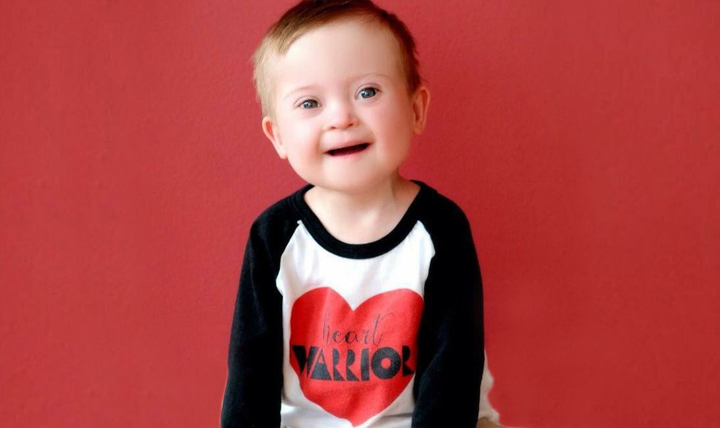 Hudson Moore, son of Army Sgt. Shane Moore and his wife Dionna, is a survivor of four heart surgeries, cardiac arrest, cancer, and many other medical complications. Today he is attending pre-K with a routine daily life after spending most of his baby years in and out of the hospital. (Courtesy Photo)


FALLS CHURCH, Va. — Dionna Moore had a healthy pregnancy and only discovered something was wrong with her newborn son, Hudson, when she didn’t hear any crying after he was delivered via cesarean section.
The doctors informed Dionna and her husband, Shane, that the baby was having trouble breathing and showed some physical signs of Down syndrome. Moore said, “It was super emotional to soak all of that in,” while she was still on the operating room table. Tests confirmed her son had a hole in his heart, which is the most common type of defect in congenital heart disease, or CHD.
A diagnosis of CHD means a defect or abnormality in the structure of the heart is present at birth. Down syndrome is another disorder present at birth arising from a chromosome defect. 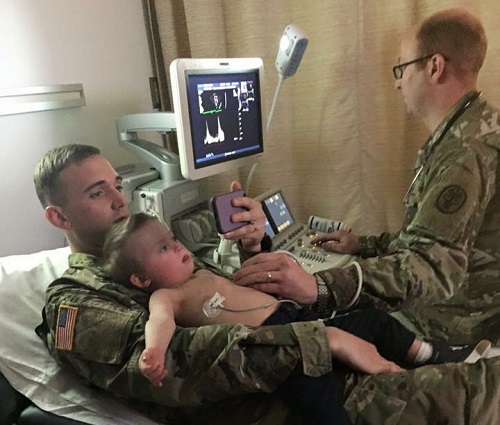 Hudson sits atop his dad, Army Sgt. Shane Moore, as pediatric cardiologist Army Maj. Ryan Flanagan performs an echocardiogram at a check-up. (Courtesy Photo)
According to Hudson’s pediatric cardiologist, Army Maj. Ryan Flanagan, about half of babies born with Down syndrome are born with a heart problem. And, if a baby has another anomaly like a cleft lip, medical personnel screen the baby for CHD.
Flanagan says for every 110 births, there will be one baby born with CHD. The Military Health System has a handful of pediatric cardiologists that diagnose, monitor, and treat children with heart conditions. Most surgeries are referred out to the best heart centers in the country.
“Sometimes a hole between the left and right ventricles of the heart will heal on its own,” said Flanagan. “And in other instances, surgery is required – sometimes in the first few days of life if a severe defect is present.”
Flanagan said Hudson’s medical condition at birth is common. “Unfortunately, Hudson had a number of complications – which anyone can have,” said Flanagan. “His mom has been a great advocate for him and they have maintained a really good outlook despite a rocky course."
“Every single day, we had something,” Moore said. “An infection, a collapsed lung, a leg amputation scare, cardiac arrest – it was constantly up and down.”
Hudson spent his first six months of life in the pediatric intensive care unit. Shane Moore, a sergeant in the Army, changed his military occupation from the 82nd Airborne Division to training as a respiratory therapist after learning of his son’s diagnoses. Hudson received treatments while they were stationed at Ft. Bragg in North Carolina, and had his first three heart surgeries at Duke University.
Dionna Moore said the weight of dealing with constant medical concerns in her baby was a lot to manage. She was constantly worried it would be the last day with her son, so she created a lot of videos.
“You live every day like it's the last moment,” Moore said. “It's so exhausting when you're hanging on and trying to remember every little thing.”
Moore says she had little time to process her own emotions. “I needed a place to organize everything while I was in the mix. It was therapeutic to have it all together on social media. And, I wanted people who cared about Hudson to know what was happening because things were changing so drastically every day.”
Two months after coming home from the hospital, tests revealed Hudson had an aggressive form of blood cancer, called acute myeloid leukemia. The chemotherapy at Duke Hospital was challenging, and there were points when Moore didn’t know how many days Hudson had. But, he pulled through. He beat leukemia and had his fourth heart surgery at Boston Children’s Hospital – all before his second birthday.
Flanagan said there aren't many things a woman can do to prevent CHD. “What we do know is that exposures to alcohol or other substances are factors.” Some conditions in a pregnant mother make a heart problem in the baby more likely. For example, expecting mothers with metabolic issues, like diabetes, can predispose the baby to having heart problems.
If a maternal fetal medicine doctor has a concern during an ultrasound, or if the patient meets certain criteria, Flanagan says a pregnant mom will be referred to a pediatric cardiologist to do imaging of the fetal heart. If diagnosed with CHD, the baby will be monitored by a congenital cardiologist for life.
Moore’s family today is “in the groove of life outside of a hospital.” She believes the best chance for families who are dealing with CHD is to get involved.
“Learn medical terminology, understand what the medical options are and be part of the decision-making process,” said Moore. “Take the time to learn even though it can be overwhelming and scary. Nobody knows your child like you do, and you can recognize when something is not right. Be a champion for your kid.”

Pediatric care in the military rated 'excellent' but can improve

Focus on prevention … not the cure for heart disease

Teaching children about taking care of their teeth can be challenging
Recommended Content:
Children's Health

Lose to win: Some service members struggle with weight

Learn about the small changes that can make a big difference in your overall health
Recommended Content:
Physical Activity | Heart Health

According to the American College of Nurse-Midwives, in 2014, 8.3 percent of all U.S. births were delivered by CNMs
Recommended Content:
Children's Health | Women's Health

Advice to young athletes: A variety of sports is the spice of life

Young athletes who focus on one sport instead of sampling a variety are more likely to suffer overuse injuries
Recommended Content:
Children's Health | Physical Activity

Children of military parents face some real challenges, such as frequent relocations, which can make them feel isolated and turn to thoughts of suicide; Find out more about how you can keep them resilient
Recommended Content:
Suicide Prevention | Children's Health

Making sure children have all their vaccinations before going back to school is as important as making sure they have the right supplies
Recommended Content:
Preventive Health | Children's Health

Pumping on the job is worth any hassles, breast-feeding moms say