By Liji Thomas, MD
Anti-NMDAR encephalitis is usually caused by an autoimmune reaction caused by antibodies to the NMDA receptor, which is found most densely on the surface of the neurons in the hippocampus of the brain. 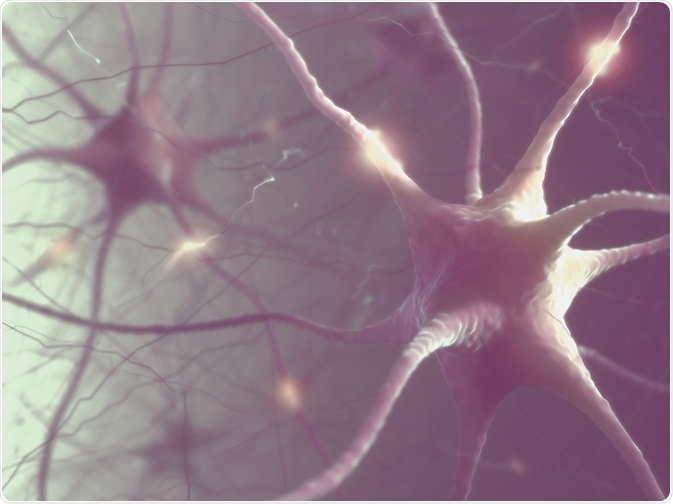 Credit: ktsdesign/ Shutterstock.com
These antibodies disrupt the functioning of the ligand-gated cation channels formed by the NMDAR, which result in profound psychiatric and neurologic disturbances. The psychiatric symptoms often precede the neurologic features by up to four weeks, and may not be recognized as part of this syndrome at first.

The diagnosis of anti-NMDAR encephalitis is based upon the history and examination, followed by specific assays.

Clinical features in these patients fall into 8 groups:
Careful observation has led to their classification as early, middle and late symptoms, in what has been termed a ‘staged presentation’.

In a few cases, psychiatric symptoms usually in the form of manic symptoms are the only features, these include delusions, aggressive behavior and mood disorders. Especially in children, neurologic symptoms progressing to include psychiatric, cognitive and autonomic signs and symptoms within a month of onset of symptoms should ring a bell and lead to anti-NMDAR testing.
This means that the diagnosis of this condition, which can be fatal but is more often followed by a full recovery, is dependent upon the clinical recognition of this possibility in all cases of psychosis or mania of recent onset, especially taking notice of warning signs of this underlying cause. These include:

The definitive diagnosis is based on the detection of IgG antibodies to the NMDAR, based on cell-based serum antibody assays. These, however, have a low sensitivity of only about 75% though they are highly specific (at 97-99%) and thus their use in isolation might cause a quarter of all anti-NMDAR encephalitis cases to be missed, as well as false positives in up to 3% of cases.
To prevent this, an individual with a positive serum antibody test result should have it confirmed by an assay of a cerebrospinal fluid (CSF) sample, because this is 100% sensitive and specific. This should also be done in patients in whom there is a strong clinical suspicion of anti-NMDAR encephalitis even if the serum assay results are negative.
The other CSF findings include lymphocytic pleocytosis (the presence of a variable white cell picture), oligoclonal bands on electrophoresis, and a high concentration of NR1 antibodies, which points to their intrathecal synthesis.
Viral studies are typically negative, thus ruling out infection as the cause of the immune activation, while the pleocytic CSF suggests that autoimmune activation is the primary pathology. The higher the antibody levels, the more likely the presence of an underlying tumor and the more aggressive the presentation is.

The electroencephalogram (EEG) is abnormal in almost 90% of patients with this condition. The specific sign in this disorder is extreme delta brushes, but this is seen in only less than a third of patients, and only in very ill patients, that is, those who are in the intensive care unit. Nonspecific slowing is always seen at some stage, in up to 90% of patients, and helps to distinguish between primary psychiatric illness and encephalitis.

Brain imaging with MRI is not relevant in this disorder as only a third of patients with this condition show any changes. These include increased FLAIR or T2 signal, in several regions including the hippocampus, cerebellum, cerebral cortex, and basal ganglia, which are not specifically related to the symptom severity.

All patients should be screened for a tumor at least once following the diagnosis. The most frequently found tumor by far is the ovarian teratoma containing nervous tissue, and most often (52%) in females of 12 years or above.
It is suspected that the rich expression of anti-NMDA receptors on the nervous tissue within the tumor breaches the barrier of immunological tolerance to these receptors, causing the clinical syndrome. However, up to 41% of these patients do not give any evidence of a tumor.
When a curable tumor is identified, such as a teratoma of the ovary, the prognosis for remission is improved because of the high probability of complete tumor removal. In high-risk patients, such as females above 12 years of age, a 6-monthly screening MRI of the pelvis and abdomen for 4 years is recommended.

Conditions to be ruled out by appropriate investigations include:
Reviewed by Chloe Barnett, BSc