According to a new study published in the European Respiratory Journal, inhaling vapor from e-cigarettes could help pneumonia-causing bacteria stick to the cells that line airways. 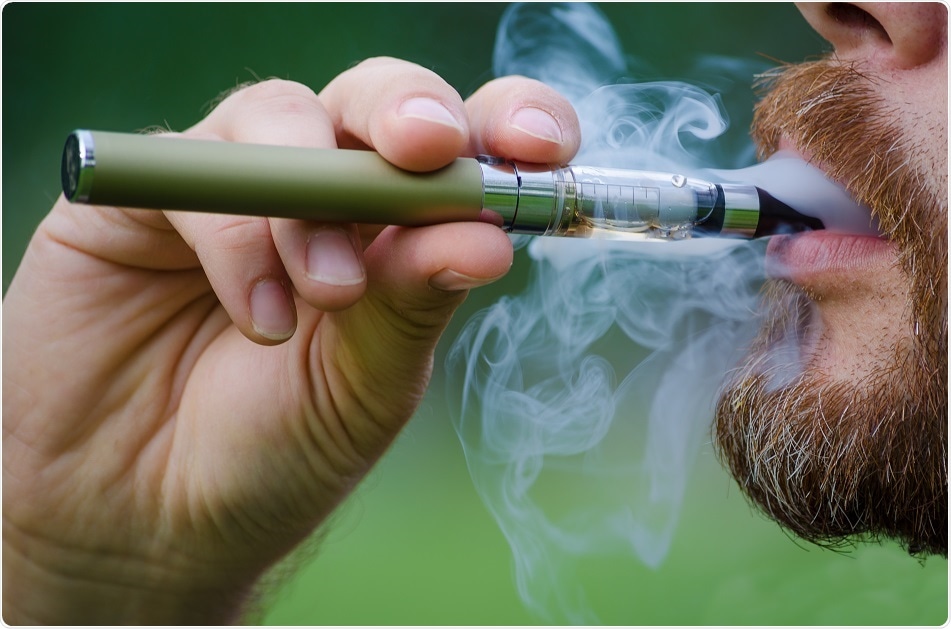 Credit: Marc Bruxelle/ Shutterstock.com
The current study, which included experiments with cells, mice, and humans, indicated that e-cigarette vapor had a similar effect as that of traditional cigarette smoke or particulate matter from fossil-fuel pollution, which are well known to increase the risk of lung infection by pneumococcal bacteria.
According to Prof. Jonathan Grigg, the lead study author and professor of Paediatric Respiratory and Environmental Medicine at Queen Mary University of London, the study showed that prolonged vaping could elevate the risk of bacterial lung infection.

Pneumococcal bacteria can exist in our airways without causing illness. However, in some cases, they can invade the lining cells causing pneumonia or septicaemia. We know that exposure to traditional cigarette smoke helps these bacteria stick to airway lining cells, increasing the risk of infection. We wanted to see whether or not e-cigarettes might have the same effect"
Professor Grigg, Queen Mary University of London

The current study analyzed the impacts of e-cigarette vapor on a molecule, called platelet-activating factor receptor (PAFR), which is produced by the cells that line the airways.
In an earlier research, scientists found that pneumococcal bacteria use PAFR to bind to the airway cells, which increased the bacteria’s ability to infect the body tissues and cause disease. The study also showed that increased levels of PAFR are correlated with increased levels of pollution, smoking, passive smoking, and welding fumes.
In the current study, the researchers examined the human nose lining cells that are exposed to e-cigarette vapor, some containing nicotine and some without, while some cells were not exposed. Cells exposed to e-cigarette vapor produced threefold increased levels of PAFR, irrespective of vapor that either contained nicotine or free from nicotine.
Furthermore, scientists subjected these cells to pneumococcal bacteria. The observations showed that the number of bacteria that stuck to these cells was doubled as a result of exposure to either nicotine-containing or nicotine-free vapor.

A research team led by Prof. Aras Kadioglu, Department of Bacterial Pathogenesis at the University of Liverpool, examined the impacts of e-cigarette vapor in mice. The study findings showed that exposures to e-cigarette vapor heightened the levels of PAFR on airway lining cells and elevated the infection by pneumococcal bacteria in the respiratory tract, thereby making mice more vulnerable to the disease.
Finally, scientists examined the PAFR levels in the airway lining cells in 17 people. Among them, ten were regular vapers of nicotine-containing e-cigarettes, one used nicotine-free e-cigarettes, and six were not vapers. Initially, the PAFR levels in the nasal tract of all 17 volunteers were measured. Then, vapers were instructed to take at least ten puffs on their e-cigarettes over five minutes. Post-vaping measurements taken after one hour showed threefold increased PAFR levels on airway cells.

Together, these results suggest that vaping makes the airways more vulnerable to bacteria sticking to airway lining cells. If this occurs when a vaper gets exposed to the pneumococcal bacterium, this could increase the risk of infection.
Some people may be vaping because they think it is totally safe, or in an attempt to quit smoking, but this study adds to growing evidence that inhaling vapour has the potential to cause adverse health effects. By contrast, other aids to quitting such as patches or gum do not result in airway cells being exposed to high concentrations of potentially toxic compounds."
Professor Grigg, Queen Mary University of London

Researchers hope to continue to study the association of vaping and infections in humans and to observe the effects of using newly launched “heat-not-burn” e-cigarettes.
Source:
https://www.eurekalert.org/pub_releases/2018-02/elf-rsv020618.php
Publicado por salud equitativa en 6:03