A new study published in the BMJ journal Heart, has revealed a significant link between cardiovascular disease and stroke risk in women who began menstruating before the age of 12. 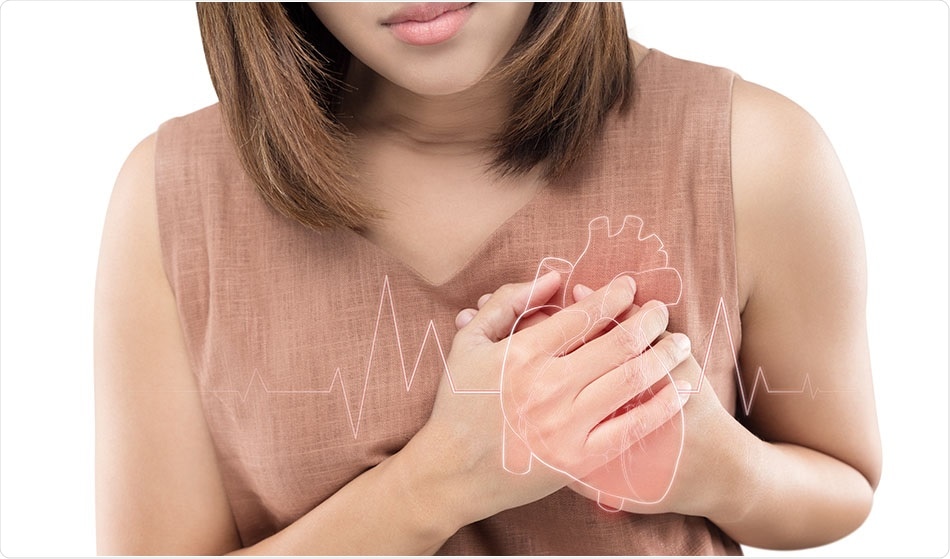 Credit: Emily frost/Shutterstock.com
Early age of menarche is one of many reproductive risk factors, including pregnancy complications, early menopause, and hysterectomy that have all been associated with cardiovascular disease in later life. A previous study suggested that certain reproductive risk factors are associated with elevated heart disease or stroke risks, however the results obtained were unclear.
In order to add clarity, the researchers analyzed data obtained from the UK Biobank—a large population-based study of more than half a million men and women up to the age of 69, who were recruited between 2006 and 2010—in an attempt to find  potential associations.
In the current study, the participants were asked to fill in questionnaires that were based on their lifestyle, environment, and medical history, and incorporated a wide range of reproductive factors. They were also subjected to clinical tests in order to evaluate their physical and functional health condition, and which involved  the analysis of urine, blood, and saliva samples.
The health condition of 267,440 women and 215,088 men, none of which had heart disease when they entered the study, was tracked up to March 2016 or until they suffered their first heart attack or stroke, whichever came first.
The average age of the women at the beginning of the study was 56, with 51% from the most affluent third of the UK population. Six out of 10 had never smoked. The average age at which they had started having periods was 13; 85% had been pregnant and 44% had at least two children. The average age at which they had their first child was 26.
One out of every four women had miscarried, and 3% had a stillbirth. Nearly two-thirds of them had undergone menopause at an average age of 50.
42% of the men had fathered two kids before the start of the study.
During the study’s monitoring period that spanned for 7 years, 9054 cases of heart disease were recorded, in which 34% were in women. The total included 5782 cases of coronary artery disease and 3489 cases of stroke, which comprised 28% and 43% of women respectively.

The results of the data analysis indicated that women who had periods before the age of 12 were at 10% increased risk of heart disease when compared to those who had been 13 years or older.
Likewise, women who had undergone early menopause (before the age of 47) had a 33% heightened risk of heart disease, and 42% increased risk of stroke, after taking other potentially influential factors into account.
Previous miscarriages were linked to increased risk of heart disease, with each miscarriage increasing the risk by 6%. Stillbirth also increased the risk of heart disease by 22% and stroke by (44%).
Hysterectomy was associated with elevated risk of cardiovascular disease by 12% and of heart disease by 20%. Women who had their ovaries removed before a hysterectomy were subjected to a two-fold increased risk of developing cardiovascular disease than those who hadn't had these procedures.
Another risk factor was young age at first parenthood, with every additional year of age reducing the risk of heart disease by around 3%.
But the similarity in link between the number of children and heart disease for men and women suggested that biological factors were less important than the social, psychological, and behavioral ones.
Since this is an observational study, there were no firm conclusions about cause and effect.
In addition, the information on reproductive factors was based on recall and the results may not have been completely accurate. However, the study was large and the researchers were able to account for a range of factors that might have skewed the data.
The researchers commented: "More frequent cardiovascular screening would seem to be sensible among women who are early in their reproductive cycle, or who have a history of adverse reproductive events or a hysterectomy, as this might help to delay or prevent their onset of cardiovascular disease”.
Source:
https://www.eurekalert.org/pub_releases/2018-01/b-spb011118.php
Publicado por salud equitativa en 10:13