By Catherine Shaffer, M.Sc.
Sun exposure has some positive and many negative effects for humans. The skin requires exposure to UV-B rays from the sun in order to stimulate vitamin D synthesis, as a lack of vitamin D can cause illnesses like rickets and may increase the risk of cancer. With this said, UV light is also a known carcinogen, and excessive exposure can cause cancer.
In spite of the connection with cancer, sunbathing, tanning, and other activities involving a high degree of UV exposure continue to be popular, and the incidence of skin cancer continues to increase about 3 percent per year. 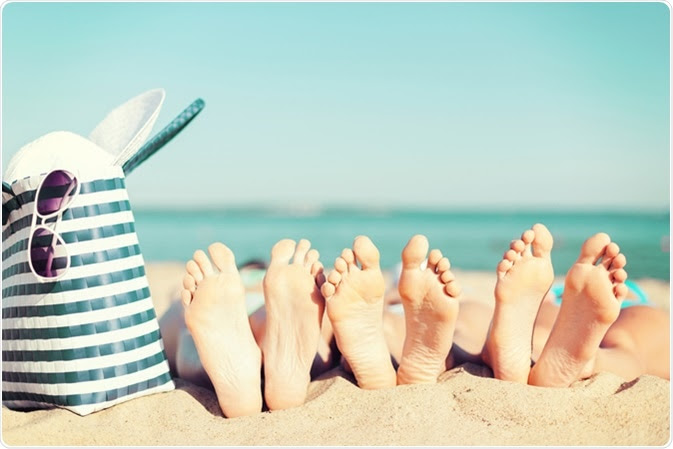 Image Credit: Syda Productions / Shutterstock
Studies on sunseekers have shown that many meet psychological criteria for a substance-related disorder, that avid tanners could distinguish between true UV exposure and mock exposure in blind tanning bed experiments, and that among frequent tanners, administration of naltrexone induces withdrawal symptoms.
A study in 2014 by researcher David Fisher and his colleagues from Brigham and Women’s Hospital detailed a mechanism for this apparent addictive relationship. 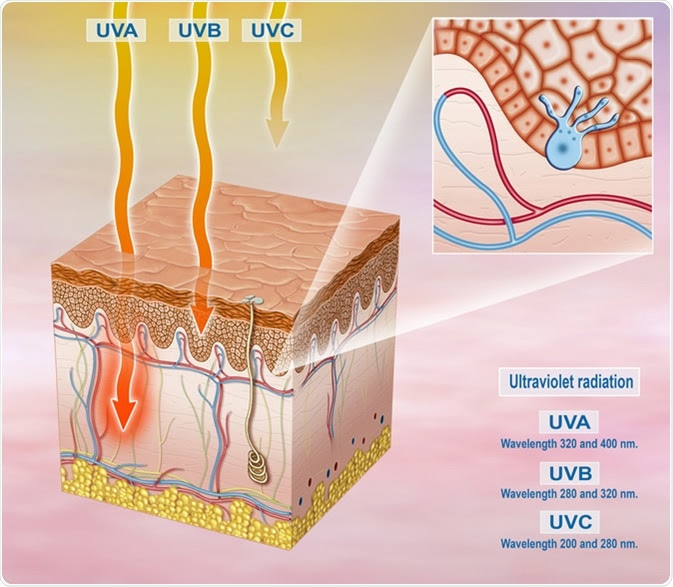 Illustration of the segment of the exposed skin to sunlight and solar UVA, UVB, UVC. Image Credit: Alexilusmedical / Shutterstock

UV light induces damage to epidermal keratocytes through p53-mediated transcriptional induction of the proopiomelanocortin (POMC) gene. POMC is then cleaved into two peptides: α-melanocyte-stimulating hormone (α-MSH) and β-endorphin. α-MSH stimulates melanocytes to produce the pigment eumelanin, which tans the skin. β-endorphin, however, is a highly abundant endogenous opioid that binds to the μ-opioid receptor. Exogenous opioids that bind to the μ-opioid receptor are typically addictive.

In their study, Fisher, et al found that repeated UV exposure produces opioid receptor-mediated addiction in mice with measurable withdrawal symptoms induced by naloxone.
A knockout of a gene in the UV-response pathway prevented the addictive behavior response. The authors speculate that an evolutionary mechanism may reinforce sun-seeking behavior.

Some indications that an individual may have sun addiction include withdrawal when unable to access sunshine or tanning, being unable to stop even when you want to, and continuing to tan regularly even after you’ve had skin cancer.

Genetics may play a role in susceptibility to sun addiction. A 2014 study by the Yale School of Public Health and the Yale Cancer Center found that a variant of the gene PTCHD2 may increase the risk of developing a tanning addiction.
Women with lighter skin are also at higher risk. As well, some psychological factors have been shown to play a role in sun addiction. Body dysmorphic disorder and obsessive compulsive disorder correlate with addiction to sun or tanning.

Public health experts recommend educating young people about the dangers of sun exposure and the potential for addiction before they have formed a habit. For those who already have sun addiction, treatment may help them to kick the habit.
For those who desire the look of tan skin, self-tanning creams and sprays are available on the market, and exercise can offer a healthier benign endorphin boost without the cancer risk.
Like other addicts, recovering sun addicts should avoid situations that can trigger relapse, like health clubs that offer tanning beds and associating with other tanners.
Reviewed by Afsaneh Khetrapal BSc (Hons)