In the human genetic pattern, there are a number of genes that determine the size, shape, and color of a person. The gene that controls the extendibility of the thumb is known as the "Bendy thumb gene." The bendy thumb gene comprises of multiple alleles in the chromosomes. One allele from the bendy thumb gene can produce a straight thumb and another allele may produce a hitchhiker's thumb. It all depends on what allele people receive from their parents. 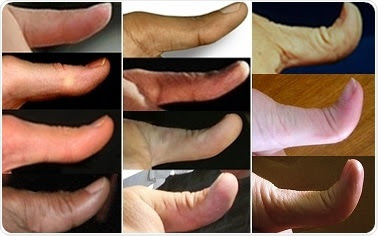 The group of genes that is responsible for a trait is known as a genotype, with the characteristic of that particular trait called a phenotype. Hitchhiker's thumb is not to be considered as a genetic condition or disorder, but is a result of the phenotype. Phenotype consists of traits that influence the appearance and behavior of a person. Traits are alleles that help in the formation of chromosomes and fall into two categories: dominant traits and recessive traits.
Let us assume “S” to be the dominant allele and “s” to be the recessive allele. If a person is born with the “ss” genotype, then they will have a hitchhiker's thumb. A person born with the “Ss” genotype will have a straight thumb, but will also be a bearer of the hitchhiker's thumb. A person born with an "SS" genotype will only have a straight thumb and no chances for having the condition of the hitchhiker.

Conditions that Cause Hitchhiker's Thumb

Joint Hypermobility and Diastrophic Dysplasia are conditions associated with Hitchhiker's thumb.
A person with hypermobility feels pain in the joints of his fingers, knees, and elbows.  This condition is often found in young people and children. It is a common condition and hence does not require any treatment, unless the frequency of the pain in the joint is very high.
This condition includes abnormal spine curvature, short legs and arms, upward-turning foot, and unusually bending thumbs or the hitchhiker's thumb.
Genetic disorders and defects are possible to occur at any stage during pregnancy. Most of the disorders tend to affect the baby before the third month (the time during which the formation of the organs occurs). Although hitchhikers is genetic, the parents are not always responsible for this defect in the child. If both the parents have straight thumbs, there is a lowered chance for the child to get affected by hitchhiker’s thumb.
If one parent has hitchhiker's thumb while the other has a straight thumb, there are possibilities for the child to get either of the (straight or hitchhiker) thumb structures. In some cases, there are also chances for the child to be born with disorders, even though the mother and father are free of any genetic risks.