Checking your device against ones used at your doctor's office may be advised, experts say 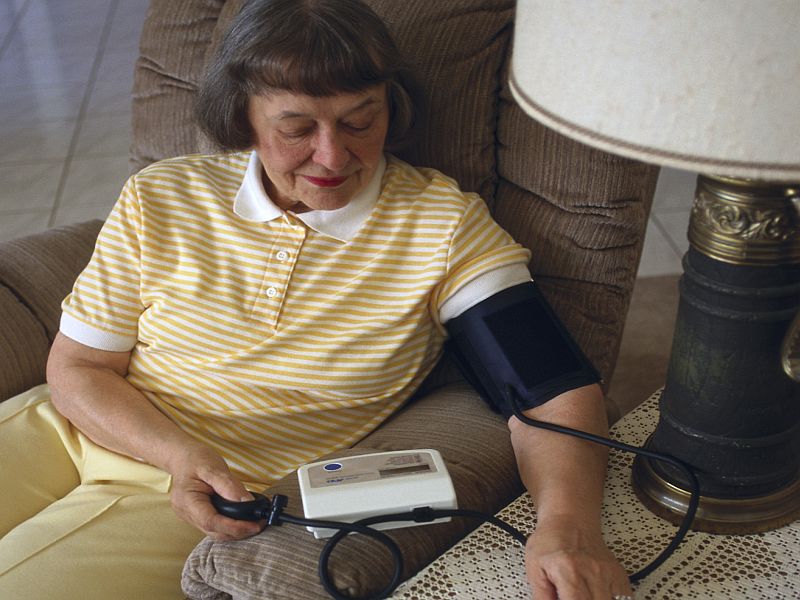 WEDNESDAY, June 14, 2017 (HealthDay News) -- Millions of older people often turn to do-it-yourself home blood pressure monitors to track that vital health sign.
But a small, new Canadian study suggests that readings from the devices are wrong most of the time and could put patients at risk.
A team led by Jennifer Ringrose, of the University of Alberta in Calgary, tested dozens of home monitors used by 85 patients averaging 66 years of age.
The researchers found the units weren't accurate within five mmHg of blood pressure about 70 percent of the time. And the devices were off the mark by at least 10 mmHg about 30 percent of the time, the investigators added.
That inaccuracy could have serious consequences for people's health, Ringrose said.
"Monitoring for and treating hypertension [high blood pressure] can decrease the consequences of this disease," she said. "We need to make sure that home blood pressure readings are accurate."
One U.S. expert in diabetes and its related heart risks agreed that the findings are troubling.
"This study highlights why it is so difficult to treat hypertension," said Dr. Robert Courgi. He's a specialist in diabetes care at Northwell Health's Southside Hospital in Bay Shore, N.Y.
"If the home blood pressure monitors were more accurate, we would have a better chance at successful treatment of hypertension," he said.
Should people who have bought and use these monitors toss them out? Maybe not. According to Ringrose, there are a number of ways to minimize inaccurate readings with the devices.
First, she said, "compare the blood pressure machine measurement with a blood pressure measurement in a clinic before exclusively relying upon home blood pressure readings."
Also, "what's really important is to do several blood pressure measurements and base treatment decisions on multiple readings," Ringrose added.
Home monitoring may still be very useful," she said, "because it "empowers patients and [it] is helpful for clinicians to have a bigger picture rather than just one snapshot in time."
Patients should not have blood pressure medications started or changed based on one or two measurements taken at a single point in time unless the measurements are clearly elevated, noted study co-author Raj Padwal.
Dr. Yasir El-Sherif directs stroke care at Staten Island University Hospital in New York City. He called the findings "interesting and clinically relevant in that many physicians request their patients to keep daily logs of their blood pressures. I and many neurologists who care for stroke patients regularly ask our patients to keep daily logs of their blood pressures using an automated device and inform us of a trend upwards."
El-Sherif said the study population was too small to deliver concrete conclusions, but it "does raise concern."
Certain factors -- inappropriately sized arm cuffs, patients with a specific type of blood pressure -- may combine with inaccurate readings to give some patients a "a false sense of security," he said.
El-Sharif's advice? "Patients who use these automated blood pressure devices should bring them to their physicians once or even twice to measure their accuracy against a [office-based] manual measurement," he said.
The study was published recently in the American Journal of Hypertension.
SOURCES: Robert G. Courgi, MD, endocrinologist at Northwell Health's Southside Hospital, Bay Shore, NY; Yasir El-Sherif MD, PhD, director of stroke, department of neurology, Staten Island University Hospital, New York City; University of Alberta, news release
HealthDay
Copyright (c) 2017 HealthDay. All rights reserved.
News stories are written and provided by HealthDay and do not reflect federal policy, the views of MedlinePlus, the National Library of Medicine, the National Institutes of Health, or the U.S. Department of Health and Human Services.