What’s the secret of the world’s happiest countries?

What’s the secret of the world’s happiest countries?

Judging by a new study it might be as prosaic as popping a pill.

World Happiness Day arrived on Monday with very little warning, and it was over by the time I could drink a toast to the top ten countries (including my own) in the United Nations’ World Happiness Report 2017. They are familiar bunch – the same as last year’s in fact – with Norway moving up to number one spot and Denmark falling to second, followed by Iceland Switzerland, Finland, Netherlands, Canada, New Zealand and Australia and Sweden (which tied for ninth place).
There has been much speculation over the four years since the report started coming out as to why the Scandinavian countries lead the world in happiness. How can dark, cold countries like Denmark (which has been first three times) possibly have the happiest people in the world? cynics ask.
The usual explanation gives a lot of weight to the fact that they are generous welfare states where people are cushioned against economic misfortunes and those of life in general. And the usual message for other countries, notably the United States (14th this year), is: reduce poverty, increase equality and you will have happier citizens – or, more to the point, happier voters.
But a study that forms part of this year’s report puts the anti-poverty mantra in doubt, and raises questions about what is really happening in the state of Denmark.
Measuring misery
Happiness rankings are based on national surveys which include a question such as, “Overall how satisfied are you with your life these days?” People rate their life satisfaction on a scale of 0 to 10. Data on things like income and employment, education and family life, and physical health are then compared with the happiness data to indicate the factors which have the greatest impact on people’s sense of wellbeing – important information for governments seeking re-election.
Most earlier analyses of life satisfaction have not included mental health as a factor because, as subjective assessments, they could be measuring the same thing. However, the wellbeing researchers responsible for the “Key Determinants of Happiness and Misery” chapter of this year’s report suspected that mental health was an independent factor in life satisfaction and important enough to measure. To make it an objective measure they used, wherever possible, only mental illness that had been diagnosed or led to treatment.
Using surveys from three Western countries (Britain, the United States and Australia) and one Asian developing country (Indonesia), leading happiness guru Richard Layard and colleagues in the Well-Being Programme at the London School of Economics and Political Science ran the mental health data alongside data for other factors – and found their suspicions confirmed.
When it comes to the causes of happiness and misery, they say,

In the United States, for example, someone who is poor is 5.5 percentage points more likely to be miserable, but someone who is depressed or anxious is 10.7 points ahead on the misery scale. Poverty is clearly an important contributor to gross national misery, but even so, the study authors found that “household income per head accounts for under 2% of the variance in happiness in any country.”
Here’s their take-home for governments: If you want a happier nation, treat mental illness. 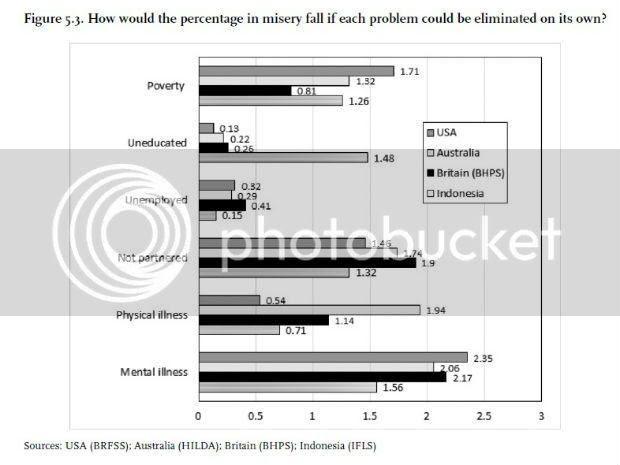 In the US, for example, eliminating poverty, unemployment and physical illness would reduce the 5.6 percent of the population in misery (lowest level of satisfaction) by 2.5 percentage points. Abolishing depression and anxiety disorders without changing anything else would reduce misery by almost as much: 2.35 percentage points.
Importantly, it would cost less. The study authors calculated that relieving one person of misery in Britain by reducing poverty would cost £180,000 ($222,500), whereas achieving the same goal by treating anxiety or depression would require just £10,000.
What’s causing the depression?
More economical, and important for people’s happiness, of course, is the prevention of mental illness and other misery inducing circumstances such as poverty. It turns out that, lurking behind the gross national misery stats is a very preventable cause -- family breakdown – although the authors don’t name it in so many words.
Analysing British cohort data on childhood experiences, they find that the emotional health and behaviour of a child are the best predictors of a satisfying or dissatisfying adult life. And the best predictor of a child’s emotional health and behaviour is the mental health of the child’s mother.
Why would a child’s mother have poor mental health? Another finding from the study gives us a clue: having a partner is also crucial to happiness in Western countries – about as strong a factor in Australia and the UK as income.
Now, we know that one of the reasons people don’t have a partner is that they are divorced, or their cohabiting partnership has broken down. Moreover, cohabitation is less stable than marriage, and since it is on the rise and more children are being raised in such relationships, more children are at risk of broken families, unhappy mothers and their own resulting unhappiness.
Governments that are serious about preventing, and not just medicating mental illness should pay attention to children, and what makes them happy or sad.
(Schools, by the way, may compensate for some of what’s wrong at home. The authors found that “which school a child went to (both primary and secondary) predicts as much of how the child develops as all the characteristics we can measure of the mother and father.”)
Revisiting Denmark
What light does all this throw on Denmark and its neighbours? Given their high rankings we might conclude that the mental health of Danes, Norwegians, Finns, Swedes and Icelanders is great, and that their families are in good shape. Well, no.
Depression in these countries is pretty near the World Health Organisation’s average of 5 percent in a general population. Prevalence in Norway is lower at 3.5 percent, but in Denmark it rose to 4.8 percent in 2000-2006. At the same time sales of anti-depressant drugs increased fourfold from the mid-1990s to 2009, rising well above the OECD average and higher even than the UK (in 19th place on the happiness index this year).
In 2014 The Guardian reported an analysis of Danish mental health data (based on the Danish Psychiatric Research Register) suggesting that as many as 38% of Danish women and 32% of Danish men will receive treatment for a mental disorder at some point during their lifetime. Danish medical statistics show that in 2011, 460,000 Danes were prescribed an antidepressant (8.3% of the population).
Is this, then, the secret of the Danes’ fabled happiness – not their exceptional mental health, but a public health system that provides them with all the anti-anxiety pills they need?
It is worth noting here that Scandinavians do not have brilliant family statistics either: they have high rates of divorce and non-marriage. Denmark in 2014 had the second highest divorce rate in the OECD (PDF) – after the Russian Federation. And while on average across the OECD births outside marriage are around 40 percent, in Denmark, Iceland, Norway and Sweden are among 10 countries where over 50 percent of children are born outside marriage. Except for happiness pills, there could be a lot of miserable mothers and children in these countries.
But even pills cost a lot, and if governments are prepared to spend the equivalent of £10,000 per head on treatment for depressed and anxious people, why wouldn’t they put that money into reducing one of the root causes of misery: the breakdown of the family?
Encouraging marriage, incentivising family friendly working conditions, giving families tax breaks, and extending childcare subsidies to stay-home mothers would all go some way towards raising a happier generation in countries currently languishing in the gross national happiness stakes.
Carolyn Moynihan is deputy editor of MercatorNet.
Image credit: william87/Depositphotos via The Local
- See more at: https://www.mercatornet.com/features/view/whats-the-secret-of-the-worlds-happiest-countries/19544#sthash.nte1xJqa.dpuf


It has long been a mystery to me why Denmark stays at the top of World Happiness Day country rankings -- actually, second this year, after Norway. Cold and dark with a high divorce rate it doesn't seem to stand a chance compared to, um, Greece. But somehow "the Nordic model" of society keeps everyone happy -- or does it? The World Happiness Report 2017 contains the results of a study that, although it doesn't include the Nordic countries, set me looking at their mental health statistics. You can read about what I found in my piece below.
Mathew Otieno, writing from Nairobi in Kenya, also has some interesting country rankings. Would you believe? -- Kenya ranks before Germany, Israel and New Zealand for internet speeds, and Rwanda has one of the cleanest capitals in the world. I don't know where they come on the happiness list but fast internet would be some people's idea of heaven.