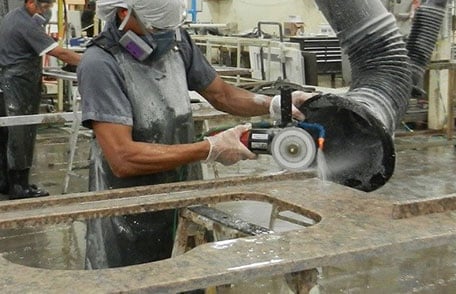 Learn more about workplace solutions for controlling exposures to Respirable Crystalline Silica in construction and hydraulic fracturing. Save lives and prevent new cases of silicosis, a severe lung disease. Understand the occupational exposure limits to keep workers safe from breathing hazardous silica dust.
Approximately 2.3 million workers are exposed to respirable crystalline silica (RCS) in the workplace, including 2 million workers in construction and 300,000 workers in general industry, maritime and hydraulic fracturing. As early as 1974, NIOSH researchers had proposed a recommended exposure limit (REL) of 50 micrograms per cubic meter (50 µg/m3) for inhalation of dust containing RCS, as a time-weighted average for up to a 10-hour workday as part of a 40-hour workweek. NIOSH research into engineering control methods to reduce RCS exposures in the workplace are ongoing, helping employers to safeguard the health of their employees.

What is Silica and Silicosis?

Silica, or silicon dioxide (SiO2) is a mineral that occurs naturally in crystalline or non-crystalline form. The most abundant crystalline form is α-quartz, which is the most common mineral on earth's continents. It is found in sand, sandstone, shale and granite. Drilling, crushing, cutting, chipping, breaking, sawing or polishing materials containing crystalline silica can create a large amount of respirable dust. These dust particles, mostly 10 microns in size and smaller, are too small to see, but can penetrate to the deepest part of the human lung when inhaled. Chronic inhalation of such respirable crystalline silica (RCS) dust can lead to severe lung disease, such as silicosis or lung cancer. Having silicosis can, in turn, increase the risk of developing tuberculosis. RCS exposure has also been linked to kidney and auto-immune diseases.

A worker wet-grinds a stone countertop using local exhaust ventilation by means of a drop-down arm from a ceiling-mounted dust collector.

What Jobs are at Risk for Increased Exposure to RCS dust?

There are risks for inhalation of RCS in many jobs in many different industries. Some examples are:

What is the New Occupational Exposure Limit?

The OSHA Final Rule for Occupational Exposure to Respirable Crystalline Silica, including the standard for construction, 29 CFR 1926.1153, and for general industry and maritime, 29 CFR 1910.1053, took effect on June 23, 2016. The OSHA final rule reduces the permissible exposure limit (PEL) for respirable crystalline silica (RCS) to 50 micrograms per cubic meter of air, matching the NIOSH REL. Engineering controls are now also a part of the new rule helping to reduce worker exposure. Depending on the industry, implementation dates for the new rule range from 2017 to 2021. The new occupational exposure limit is expected to save over 600 lives and prevent more than 900 new cases of silicosis annually.

How Can Employers Control Exposures to RCS dust?

Controlling exposures to occupational hazards is the fundamental method of protecting workers. Traditionally, a hierarchy of controls has been used as a means of determining how best to implement feasible and effective controls.
One application of the hierarchy of controls to RCS exposure can be summarized as follows:
The idea behind this hierarchy is that the control methods at the top of the list are potentially more effective, protective, and economical (in the long run) than those at the bottom. Following the hierarchy normally leads to the implementation of inherently safer systems, ones where the risk of illness or injury has been substantially reduced.

Jackhammering with a water spray control that reduces dust.

Filter bags of the NIOSH mini-baghouse retrofit assembly (NMBRA) have been installed on the thief hatches on top of this sand mover, used for hydraulic fracturing.

Exposures of asphalt milling machine operators to RCS have been reduced by implementation of local exhaust ventilation.

CDC's National Institute for Occupational Safety and Health (NIOSH) has been studying ways to protect workers from occupational exposure to RCS for over 40 years. Laboratory research has tested the effectiveness of local exhaust ventilation in controlling RCS exposure during cutting and sawing of construction materials. In field studies, engineering controls have been tested under real-world conditions to determine their effectiveness in protecting worker health.
Engineering controls for RCS dust are becoming increasingly available for a range of tools and equipment. Engineering controls are often based on the use of a collector such as a shroud, combined with an industrial vacuum for local exhaust ventilation. Such arrangements are commercially available for jackhammers, drills, chisels, concrete breakers, saws, sanders, concrete floor polishers, hand grinders and asphalt milling machines
Local exhaust ventilation systems using baghouse controls are available for RCS released from sand mover equipment during hydraulic fracturing. Wet methods to control RCS are commercially available for drills, saws, grinders and polishers. Wet RCS controls are not commercially available for jackhammers, but instructions for making your own water spray engineering control can be found on the website for CPWR, The Center for Construction Research and Training.