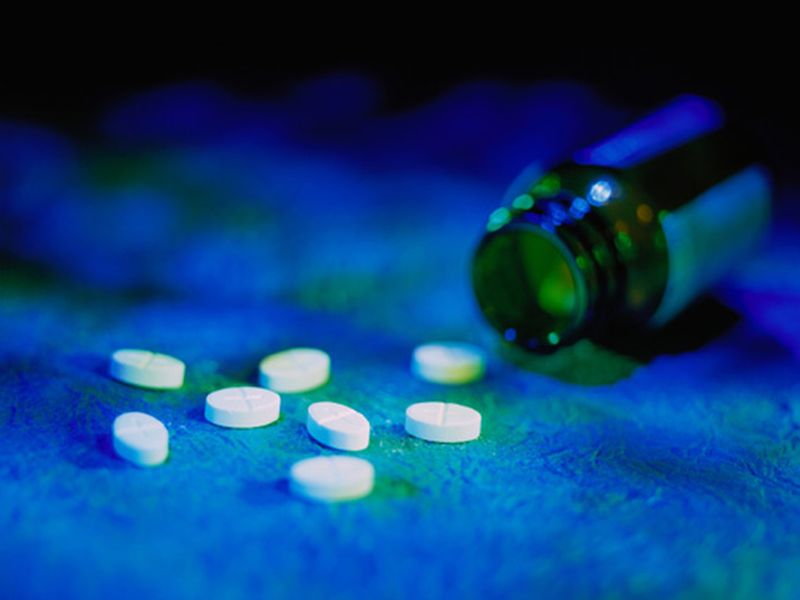 MONDAY, March 20, 2017 (HealthDay News) -- Patients undergoing a surgical procedure to treat an irregular heartbeat are less likely to suffer problematic bleeding when given the blood thinner Pradaxa rather than warfarin, a new study finds.
The two blood thinners were evaluated in a study of more than 600 patients. All had a minimally invasive procedure called catheter ablation to correct the heart rhythm disorder known as atrial fibrillation.
The risk of having a major bleeding event among patients taking warfarin (Coumadin) was about 7 percent, whereas the risk among those taking Pradaxa (dabigatran) was just under 2 percent, said lead researcher Dr. Hugh Calkins.
"It's an absolute risk difference of 5 [percentage points], or a 77 percent lower risk," said Calkins, a professor of medicine at Johns Hopkins University School of Medicine in Baltimore.
"I think this will change practice," he said.
Patients undergoing catheter ablation usually receive blood thinners before, during and after the procedure.
For this study, participants were assigned either the old standby, warfarin -- or the newer drug, Pradaxa. The patients took the drugs for four to eight weeks before the procedure, during the procedure, and eight weeks afterwards.
Five patients taking Pradaxa suffered major bleeding after the procedure, compared with 22 who used warfarin, the researchers reported.
Also, fewer patients taking Pradaxa had fluid buildup around the heart (cardiac tamponade) and groin bruising from the catheter than those taking warfarin. However, minor bleeding was similar for both groups, the researchers found.
One patient in the warfarin group had a blood clot that traveled to the lung, Calkins said.
The study was funded by Pradaxa's maker, Boehringer Ingelheim.
Atrial fibrillation affects more than 6 million people in the United States alone, said Dr. Stavros Mountantonakis, associate director of electrophysiology at Lenox Hill Hospital in New York City.
The heart rhythm disorder is associated with palpitations, shortness of breath and decreased exercise tolerance. It also can be a major cause of stroke, he said. For that reason, many patients with atrial fibrillation need to be on blood thinners.
"For many decades, warfarin was the only blood thinner available," said Mountantonakis, who wasn't involved in the new study. But its use was challenging for patients and their doctors, because food and other medicines affected its effectiveness. Also, patients had to have their blood checked very frequently to make sure medication levels were within a very narrow therapeutic range, he explained.
The introduction of newer blood thinners, such as Pradaxa, has "revolutionized stroke prevention in patients with atrial fibrillation," Mountantonakis said. "These drugs have practically no interactions; patients do not have to have a blood test; and in multiple studies they have been proven equal if not superior to warfarin."
Pradaxa is more expensive than warfarin, however. But some researchers have pointed out that because it eliminates the need for blood tests and tweaking associated with warfarin, it's actually a cost-effective alternative.
With catheter ablation, a tiny wire, or catheter, is inserted into a vein in the groin or neck. It's then threaded to the heart, where it emits radiofrequency energy signals to stop abnormal electrical signals from moving through the heart, according to the U.S. National Heart, Lung, and Blood Institute.
Two important messages resulted from this study, Mountantonakis said.
"First, the ablation procedure is mainstream, and the study shows that electrophysiologists have reached a level of expertise that allow them to perform this complex procedure safely, even while the patient is on blood thinners," he said.
"Second, Pradaxa was proven superior to warfarin, possibly due to its predictable effect," Mountantonakis added.
Calkins said that it's not known whether other new blood thinners -- such as Xarelto (rivaroxaban) or Eliquis (apixaban) -- would have the same results as Pradaxa.
The report was published online March 19 in the New England Journal of Medicine. Publication coincided with presentation of the study results at an American College of Cardiology meeting in Washington, D.C.
SOURCES: Hugh Calkins, M.D., professor, medicine, Johns Hopkins School of Medicine, Baltimore; Stavros Mountantonakis, M.D., associate director, electrophysiology, Lenox Hill Hospital, New York City; March 19, 2017, New England Journal of Medicine, online, and presentation, American College of Cardiology meeting, Washington, D.C.
HealthDay
Copyright (c) 2017 HealthDay. All rights reserved.
News stories are written and provided by HealthDay and do not reflect federal policy, the views of MedlinePlus, the National Library of Medicine, the National Institutes of Health, or the U.S. Department of Health and Human Services.