The impact of arthritis on individuals is significant. About 43.5% (23.7 million) of the 54.4 million adults with doctor-diagnosed arthritis have limitations in their usual activities due to their arthritis.1

With the aging of the US population, the prevalence of doctor-diagnosed arthritis is expected to increase in the coming decades. By the year 2040, an estimated 78.4 million (25.9% of the projected total adult population) adults aged 18 years and older will have doctor-diagnosed arthritis,2 compared with the 54.4 million adults in 2013-2015. Two-thirds of those with arthritis will be women. Also by 2040, an estimated 34.6 million adults (43.2% of adults with arthritis or 11.4% of all US adults) will report arthritis-attributable activity limitations.2 These estimates may be conservative, as they do not account for the current trends in obesity, which may contribute to future cases of osteoarthritis. 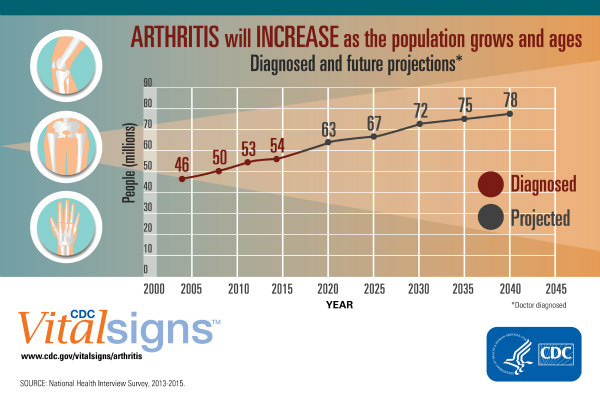