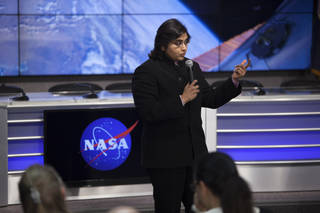 Dr. Anita Goel, chairman and scientific director of Nanobiosym in Cambridge, Massachusetts, speaks about the Nanobiosym Genes experiment ahead of its launch aboard SpaceX-10.
Credits: NASA/Frankie Martin 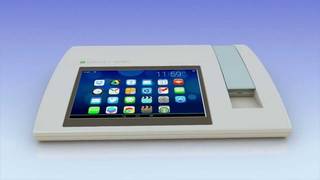 The Nanobiosym Gene Radar®, winner of the first ever XPRIZE awarded for health care.
Credits: Nanobiosym 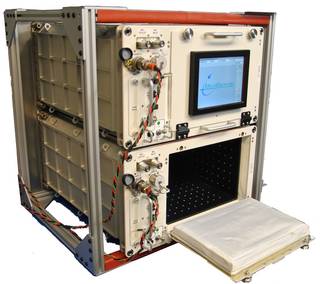 The Space Automated Bioproduct Laboratory (SABL) facility.
Credits: Bioserve
Bacteria may mutate more rapidly in space and scientists theorize patterns of those mutations could help predict how pathogens become resistant to antibiotics. Such predictions could, in turn, be used to develop new drugs to use against those pathogens. Antibiotic resistant pathogens or bacteria is a growing world-wide health concern. The long-term use of many common antibiotics has led to some diseases becoming resistant to drug therapy, which can lead to longer and more complicated illnesses.
A proof-of-concept investigation, Nanobiosym Genes, is sending two strains of Staphylococcus aureus bacteria to the International Space Station. Investigators will compare patterns of their mutations to the same organisms grown on Earth in order to refine computational algorithms that predict mutations leading to antibiotic resistance.
BioServe Space Technologies at the University of Colorado, Boulder integrated this investigation, which is hosted in four BioCells Habitats and BioServe’s Space Automated Bioproduct Lab (SABL).
“More than 25 years ago, I had the hypothesis that environment has an effect on how genes mutate and evolve, or express themselves,” principal investigator Anita Goel, chairman and scientific director at Nanobiosym Inc in Cambridge, Massachusetts, said. Goel holds a doctorate of philosophy in physics and a doctor of medicine degree. “This investigation allows me to study whether we can make mutations happen by changing the environment. The first step is to understand, everything else being the same, how does microgravity affect the rate and the pattern of mutations? Some data suggest that microgravity speeds up mutations, but we don’t know the mechanism of how the environment might play a role.”
Data from the investigation can define the mutational spectrum. Combining that with algorithms can improve the ability to predict mutations, including those that lead to drug resistance.
“We can model which way drug resistance will go and use that to develop better, smarter drugs,” Goel said. “A bug can mutate in the presence of a drug and become resistant. We’re trying to get ahead of that, predict those mutations, and be ready with a drug when they show up.”
While this work is starting with infectious diseases, it can potentially be used with anything that has a DNA marker, including cancer.
There are two key steps: first, a tool that analyzes DNA or RNA, and second, algorithms to determine the right therapy for the particular disease. Goel’s company, Nanobiosym, has developed a device called Gene-RADAR that conducts the first step.
“In principle, we can provide real-time diagnosis of any disease with an RNA or DNA signature or genetic fingerprint,” she said. “Ultimately, we can build tools to decentralize health care delivery on Earth, to diagnose diseases in real time in a village in Africa or your own home, just with a drop of blood or saliva. Right now those tests can take weeks to months. The device fits in your hand, so we also can put it on the space station to do analysis and research.”
That real-time analysis has important applications in space. Currently, experiments aboard the space station are brought back to Earth for gene analysis. The device could conduct some analyses in space and send only the data back to Earth. Astronauts could immediately test for DNA life forms in samples collected on Mars, for example, or diagnosis their own infections.
Mutant pathogens in space hardly stand a chance.
Melissa GaskillInternational Space Station Program OfficeNASA Johnson Space Center
Editor: Kristine Rainey
Publicado por salud equitativa en 3:47