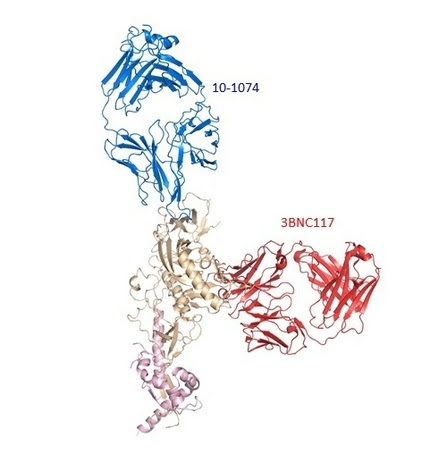 This protein-structure model shows how the broadly neutralizing antibodies 10-1074 and 3BNC117 that were infused into monkeys each bind to a different site on the SHIV spike (beige and pink). Credit: Gristick et al., Nature Structural & Molecular Biology 2016.

Giving monkeys two powerful anti-HIV antibodies immediately after infection with an HIV-like virus enabled the immune systems of some of the animals to control the virus long after the antibodies were gone, scientists at NIAID and The Rockefeller University have found. The researchers determined that immune cells called CD8+ T cells were the controlling factor.


March 13, 2017
Giving monkeys two powerful anti-HIV antibodies immediately after infection with an HIV-like virus enabled the immune systems of some of the animals to control the virus long after the antibodies were gone, scientists at the National Institutes of Health and The Rockefeller University have found.
The researchers inoculated 13 monkeys with simian-human immunodeficiency virus, or SHIV. Three days after inoculation, when an infection clearly was established, the scientists gave each monkey three intravenous infusions of two potent, broadly neutralizing HIV antibodies over a two-week period. These antibodies, called 3BNC117 and 10-1074, each bind to a different site on SHIV, helping to neutralize the virus and facilitating its clearance by the immune system.
The antibody infusions suppressed SHIV to levels near or below the limit of detection by standard assays for as long as six months. Once antibody levels had fallen very low, the virus rebounded in all but one animal. Then, five to 22 months later, the immune systems of six of the monkeys spontaneously regained control of the virus and brought it down to undetectable levels for another five to 13 months. These six controller monkeys had continuously maintained healthy levels of key immune cells after receiving the antibody infusions.
In addition to the six controller animals, four other monkeys that failed to regain complete control of the virus nevertheless maintained extremely low levels of SHIV in the blood and healthy levels of key immune cells for two to three years after infection. Thus, ten of the 13 monkeys benefitted from antibody immunotherapy, according to the researchers.
To determine whether immune cells called CD8+ T cells played a role in extended control of SHIV, the scientists gave the six controller monkeys an antibody that targets and depletes these cells. Infusion of this antibody immediately increased the amount of SHIV in the monkeys’ blood as CD8+ T-cell levels decreased. The researchers concluded that CD8+ T cells controlled SHIV replication after therapeutic antibody infusion.
Studies are underway to test whether waiting to administer the therapeutic antibody infusions until two to six weeks after SHIV infection—timing that more closely resembles how soon an HIV-infected person is usually diagnosed—also enables monkeys to control SHIV.
ARTICLE:Y Nishimura et al. Early antibody therapy can induce long lasting immunity to SHIV. Nature DOI: 10.1038/nature21435 (2017).
WHO:Interviews are available with Anthony S. Fauci, M.D., director of the National Institute of Allergy and Infectious Diseases (NIAID), part of NIH; and Malcolm A. Martin, M.D., distinguished NIH senior investigator in the NIAID Laboratory of Molecular Microbiology.
Publicado por salud equitativa en 4:31