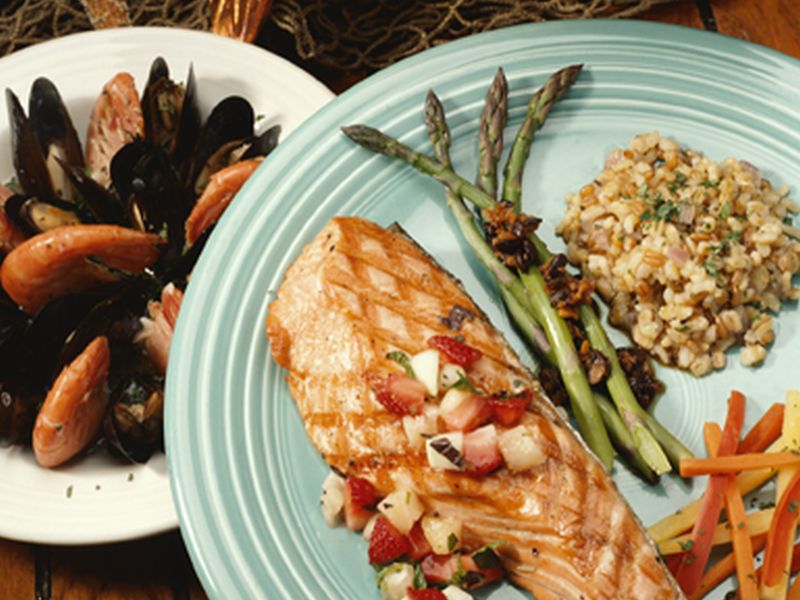 FRIDAY, March 10, 2017 (HealthDay News) -- People who are overweight and plagued by chronic pain may find relief in a Mediterranean diet, new research suggests.
The study of 98 men and women between the ages of 20 and 78 builds on growing evidence that a diet heavy on fish, fruits, vegetables, nuts and beans provides significant health benefits. It also sheds new light on why eating these foods might reduce pain associated with obesity.
Because obese people with chronic pain usually also have a high degree of inflammation, lead researcher Charles Emery suspects the foods' anti-inflammatory properties might explain the reduced pain levels.
"Although the relationship of body fat and pain has been well-documented in prior studies, the mechanism is not known," said Emery, a professor of psychology at Ohio State University.
"One possibility is the stress of body weight on joints. A second possible mechanism is via inflammatory factors in the bloodstream, because both body fat and pain are known to be associated with elevated inflammation," he said.
Slightly more than 70 percent of American adults are overweight, with 38 percent considered obese (at least 30 pounds overweight), according to the U.S. Centers for Disease Control and Prevention.
For the study, Emery and his Ohio State colleagues reviewed participants' eating habits and their answers on a short questionnaire about the pain they experience. The researchers also considered the participants' age, mental health and use of pain medications.
The upshot: No matter what they weighed, those who ate more fish and plant-based proteins such as nuts and beans had less pain.
While adjusting their findings to account for age-related pain among older participants, the researchers found that a Mediterranean diet benefited men and women of all ages.
Emery said the study had limitations, however: The researchers did not account for chronic pain that lasted more than a month and did not take blood samples to study signs of inflammation. More research is needed to support the initial findings.
Also, only an association was seen between diet and pain, not a cause-and-effect link.
"The next step is to conduct a study with blood markers of inflammation," Emery said. "Then it would be ideal to conduct an intervention study to evaluate change in body fat, inflammation and pain."
A nutrition expert who reviewed the study said it reinforces the health benefits of a diet centered on seafood and plant-based proteins.
"This study provides an early look at a possible role diet might play in offsetting pain, but more research is needed," said Connie Diekman, director of university nutrition at Washington University in St. Louis.
"Studies are needed in healthy adults to see if inflammatory markers are the same with similar pain as they are in obese adults," she said. "Studies are needed that look at diet over a longer period of time."
Diekman said it would be beneficial to know, for example, if following a Mediterranean diet while young affected a person's pain as an adult.
Still, Diekman said the new findings help drive home the point that what you eat matters.
"The bottom line here is that this is an interesting study, it gives us something to think about as we counsel clients -- diet might help your pain. But it doesn't give us a clear answer to whether if you lose weight your pain will go away," she said. "We need more research to make that connection."
The study was published recently in the journal Pain.
SOURCES: Charles Emery, Ph.D., director, Cardiopulmonary Behavioral Medicine Program, Department of Psychology, Ohio State University; Connie Diekman, M.Ed., director of university nutrition, Washington University in St. Louis; February 2017, Pain
HealthDay
Copyright (c) 2017 HealthDay. All rights reserved.
News stories are written and provided by HealthDay and do not reflect federal policy, the views of MedlinePlus, the National Library of Medicine, the National Institutes of Health, or the U.S. Department of Health and Human Services.