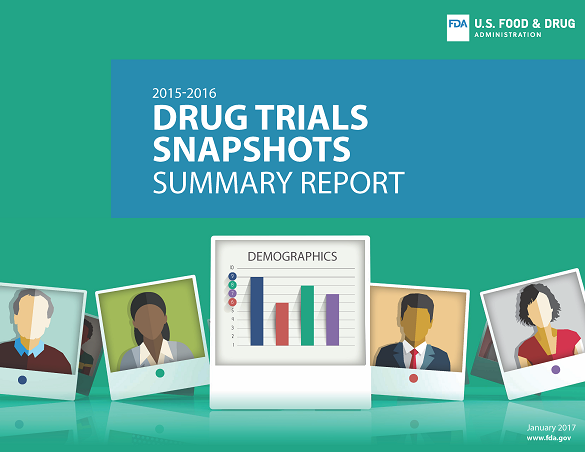 FDA Releases 2015-2016 Drug Trials Snapshots Report
Two years ago, the FDA Center for Drug Evaluation and Research launched a pilot program, called the Drug Trials Snapshots, to provide easily accessible information about patient representation in clinical trials. The goal of the program was to gather and organize information about participants in studies used to approve drugs. The Snapshots organize research participant data by sex, race, and age subgroups and they also provide information about reported differences in side effects or how the drugs worked by subgroup.
The implementation of this program and development of this report is significant because there are differences in how some population subgroups react to certain drugs compared to others. For example, there can be differences between men and women for the necessary dosage of a drug and there are certain drugs that may not be as effective in different ethnic groups. The Drug Trials Snapshots report also highlights the need for increased diversity in clinical trials to try to ensure that the drugs that are being approved work for everyone.
The Office of Minority Health (OMH) issued a draft guidance document update last fall to outline FDA's expectations and recommendations on the use of a standardized approach for collecting and reporting race and ethnicity data in submissions of clinical trials for FDA regulated medical products conducted in the United States and abroad.
You can learn more about the Drug Trials Snapshots program on the FDA website and you can download the report here.
Additional Resources:
Drug Trials Snapshots Summary Report
FDA Voice Blog: “FDA Drug Trials Snapshots and Diversity When Testing New Drugs.”
Collection of Race and Ethnicity Data in Clinical Trials-Guidance for Industry and FDA Staff Document

If you have any questions please feel free to email us at omh@fda.hhs.gov.
Publicado por salud equitativa en 10:57