Detection and Molecular Characterization of Zoonotic Poxviruses Circulating in the Amazon Region of Colombia, 2014

During 2014, cutaneous lesions were reported in dairy cattle and farmworkers in the Amazon Region of western Colombia. Samples from 6 patients were analyzed by serologic and PCR testing, and results demonstrated the presence of vaccinia virus and pseudocowpox virus. These findings highlight the need for increased poxvirus surveillance in Colombia.
The Poxviridae family comprises large double-stranded DNA viruses that infect a wide range of invertebrate and vertebrate animals, including humans (1). Many poxviruses, particularly those belonging to the genus Orthopoxvirus (e.g., vaccinia virus [VACV]) and Parapoxvirus (e.g., pseudocowpox virus [PCPV]), are considered zoonotic viruses because their infections usually arise from human contact with infected domestic or sylvatic animal species (2).
Orthopoxviruses (OPXVs) gained considerable attention in the past because variola (smallpox) virus fatally infected millions of persons worldwide for centuries. However, in 1980, smallpox became the first infectious disease to be eradicated, resulting from vaccination campaigns involving several VACV strains (3). VACV has been detected in recurrent zoonotic outbreaks in Brazil, where it has been categorized into 2 well-defined genetic lineages (4). VACV has also emerged as a zoonotic virus in India (5). In 2011, VACV infections were found in cattle herds during active surveillance in Argentina (6). In Colombia, the most recently reported VACV outbreak in 1965–1966 caused disease in ≈8,570 cows and 150 humans and was associated with intensified smallpox eradication campaigns that extended until 1972 (3,7).
Parapoxviruses are emerging zoonotic pathogens that can cause infections in humans through direct contact with infected animals, especially domestic and wild ruminants (1). Among these viruses, bovine papular stomatitis virus, orf virus, and PCPV are known to cause cutaneous lesions (2). Although a parapoxvirus outbreak in imported goats was reported in Colombia in 1983 (8), only Brazil and the United States have formal evidence of endemic and zoonotic transmission of these viruses (9,10). We describe the clinical features, serologic and molecular diagnosis, and phylogenetic analysis of poxviruses circulating along the Amazon in western Colombia.

Figure 1. Location of 6 patients with poxvirus infections and photographs of lesions from 3 patients, Colombia, 2014. A) The municipalities of Valparaíso (residence of patients 1–5) and Solita (residence of patient 6)...
During an active outbreak investigation in February–July 2014, serum and exanthematous lesion samples were collected from 6 patients in the bordering municipalities of Valparaíso (patients 1–5) and Solita (patient 6) in the department of Caquetá (Figure 1; Table) in the Amazon Region of Colombia. Archived serum samples collected in December 2012–April 2013 from 11 patients with exanthematous lesions (from several farms) in the municipality of Valparaíso who consulted the local hospital were also analyzed (Table). In all patients, the incubation period ranged from 4–7 days, after which nodules on the hands or forearms appeared, along with fever, lymphadenopathy, and localized pain. Lesions increased in size and progressed from erythematous macules to papules, vesicles, and pustules that subsequently exhibited bacterial infection by the fourth week of symptom onset. By the fifth and sixth week, lesions progressed to scabs (Figure 1). Lesions appeared mainly in hands with preexisting cuts, abrasions, or other skin barrier defects. Direct contact with lesions from the udders of cattle during milking was reported by all but 1 patient. Patient 5 was a 24-year-old woman who reported no recent contact with infected animals, but her husband was a milker who had exanthematous lesions on his hands 2 weeks before she displayed symptoms.
All serum samples were tested by ELISA for OPXV IgG and IgM as described (11) (Technical Appendix[PDF - 258 KB - 4 pages]). An ELISA for detecting parapoxvirus-specific antibodies was not available. Fifteen serum samples were positive for OPXV IgG (Table); 9 were also positive for OPXV IgM, which can persist for up to 6 months after primary infection or vaccination (11). Reliable vaccination data was not available for these patients; however, on the basis of age, only patients 3, 8, and 11 could have been vaccinated. These 3 patients exhibited detectable OPXV IgG levels, and patients 3 and 11 were also positive for OPXV IgM. These results suggest that these patients had not been vaccinated and that their lesions were caused by recent OPXV exposure. Patients 4, 10, and 14 exhibited detectable OPXV IgG without detectable OPXV IgM. These results suggest the patients had previous OPXV infections, given that an active parapoxvirus infection was demonstrated in patient 4 and vaccination could be ruled out for patients 10 (a 20-year-old) and 14 (a 24-year-old) based on their age. 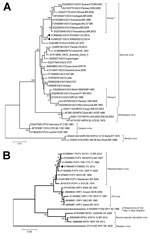 We found OPXV IgG and IgM in serum samples collected from patients with exanthematous lesions and from those who had such lesions in the past. Molecular methods allowed for the detection and characterization of VACV (3 patients) and PCPV (2 patients). Lesions caused by poxviruses affected the hands and forearms and disappeared within weeks without treatment. However, by limiting the patients’ daily activities, the infections had substantial negative impacts on the economies of dairy farmworkers and their local communities.
The disease burden of poxvirus infections in Colombia has not been estimated. However, anecdotal communications and data suggest it might be a serious and increasing health problem because farmworkers and healthcare personnel are not trained to recognize the disease and prevent subsequent transmission. The rapid spread of poxviruses could be facilitated by farmworkers performing daily milking activities at several farms and trading cattle. Also, factors such as human-to-human and fomite transmission, a growing susceptible population, and an unknown animal reservoir might increase the potential risk for infection at the community level. The serious consequences that poxvirus infections could have on immunocompromised persons (13), the increased risk for transmission related to the anatomic site of the lesions (14), the potential for long-lasting sequelae, and the possibility of the virus evolving into a more virulent strain (15) could pose a great threat to individual persons, populations, and public health systems in the near future.
Studies focused on determining the prevalence of poxvirus infections, risk factors for disease, and the geographic distribution of poxvirus strains are needed to understand the disease burden and guide effective prevention and control measures and educational outreach. Analysis and characterization of VACV and PCPV complete genomes could provide clues to explain their emergence and recent evolutionary histories, and research aimed at identifying the domestic animal hosts and wildlife reservoirs of poxviruses could further our understanding of their natural transmission cycles.
Dr. Usme-Ciro was the founder of the Unit of Sequencing and Genomics at the National Institute of Health in Colombia. His research is focused on molecular virology, specifically on molecular epidemiology, evolution and emergence of viruses of public health relevance in Colombia, and the study of viral determinants of disease severity.