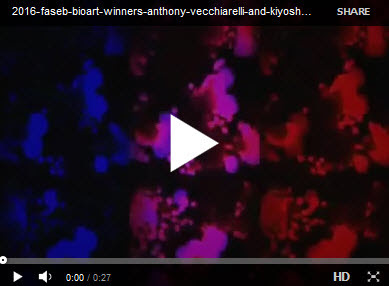 Bacteria are single-cell organisms that reproduce by dividing in half. Proteins within these cells organize themselves in a number of fascinating ways during this process, including a recently discovered mechanism that makes the mesmerizing pattern of waves, or oscillations, you see in this video. Produced when the protein MinE chases the protein MinD from one […]

Bacteria are single-cell organisms that reproduce by dividing in half. Proteins within these cells organize themselves in a number of fascinating ways during this process, including a recently discovered mechanism that makes the mesmerizing pattern of waves, or oscillations, you see in this video. Produced when the protein MinE chases the protein MinD from one end of the cell to the other, such oscillations are thought to center the cell’s division machinery so that its two new “daughter cells” will be the same size.
To study these dynamic patterns in greater detail, Anthony Vecchiarelli purified MinD and MinE proteins from the bacterium Escherichia coli. Vecchiarelli, who at the time was a postdoc in Kiyoshi Mizuuchi’s intramural lab at NIH’s National Institute of Diabetes and Digestive and Kidney Diseases (NIDDK), labeled the proteins with fluorescent markers and placed them on a synthetic membrane, where their movements were then visualized by total internal reflection fluorescence microscopy. The proteins self-organized and generated dynamic spirals of waves: MinD (blue, left); MinE (red, right); and both MinD and MinE (purple, center) [1].
Dissecting how such patterns form outside of the cell is helping to unravel the oscillatory mechanism used inside the cell. While E. coli was the model used to produce this video—a recent winner in the Federation of American Societies for Experimental Biology’s BioArt contest, many other microbes have similar proteins.
Vecchiarelli, Mizuuchi, and their colleagues have gone on to uncover what they think are the foundational principles governing this dynamic pattern of protein self-organization that appears to regulate positioning spatially during bacterial cell division [2]. In 1952, Alan Turing, a British mathematician best known for his work on code breaking (featured recently in the movie The Imitation Game), proposed a “reaction-diffusion” model aimed at explaining how molecular interactions might create the regularly repeating patterns often seen in nature.
Consequently, naturally occurring repetitive patterns such as a zebra’s stripes, a leopard’s spots, and many different kinds of spirals—like those seen in this video—are often referred to as Turing patterns. The Mizuuchi lab is currently probing several critical aspects of their proposed mechanism with quantitative analyses in the hopes of establishing, for the first time, an experimentally supported example of a Turing-style mechanism of protein pattern self-organization.
Now an assistant professor with his own lab at the University of Michigan, Ann Arbor, Vecchiarelli is also excited about using his cell-free system to study similar patterning mechanisms in cells from more complex organisms, which are called eukaryotes. In eukaryotes (which include humans), cell division follows mitosis. These two processes are highly coordinated in very complicated ways, the details of which are still not well understood. Recently emerging evidence points to the involvement of regulatory components that Vecchiarelli says very likely constitute a Turing-type, self-organization circuit reminiscent of findings with the bacterial Min system.
Besides cell division, the biological processes of cell migration, cellular response to chemicals (chemotaxis), and cellular engulfment of outside molecules (endocytosis) also seem to use similar patterns to control spatial aspects of subcellular organization. Vecchiarelli and his collaborators hope their work in bacteria encourages cell biologists to pursue additional experiments to address this type of spatial organization in more complex systems.
References:
[1] Differential affinities of MinD and MinE to anionic phospholipid influence Min patterning dynamics in vitro. Vecchiarelli AG, Li M, Mizuuchi M, Mizuuchi K. Mol Microbiol. 2014 Aug;93(3):453-463.
[2] Membrane-bound MinDE complex acts as a toggle switch that drives Min oscillation coupled to cytoplasmic depletion of MinD. Vecchiarelli AG, Li M, Mizuuchi M, Hwang LC, Seol Y, Neuman KC, Mizuuchi K. Proc Natl Acad Sci U S A. 2016 Mar 15;113(11):E1479-E1488.
Links:
Studying Cells (National Institute of General Medical Sciences, NIH)
Mizuuchi Lab (National Institute of Diabetes and Digestive and Kidney Diseases, NIH)
Vecchiarelli Lab (University of Michigan, Ann Arbor)
BioArt (Federation of American Societies for Experimental Biology
NIH Support: National Institute of Diabetes and Digestive and Kidney Diseases