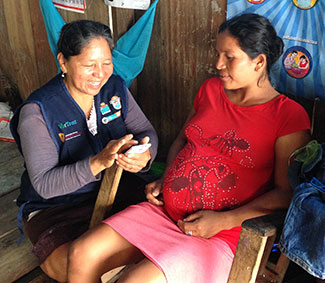 Photo by Dr. Magaly Blas
Fogarty hosted a training institute to share best practices on
mHealth research projects, including this one in rural Peru
that uses technology to connect pregnant women with
doctors.
​Researchers from 19 countries and nearly as many disciplines recently gathered at the NIH to discuss a common interest - how best to use mobile technologies to improve health in the developing world.
“We really have precious little data that documents having an app on a phone is going to make someone exercise more, or improve compliance with HIV treatment, or improve prevention of diabetes,” Fogarty Director Dr. Roger I. Glass said as he welcomed the group to a training institute that offered best practices in mobile health (mHealth) research. Fogarty’s Center for Global Health Studies hosted the session to spur more investigations of the effectiveness of smartphones, sensors and other mobile devices and to build capacity in low- and middle-income countries. The training was a complement to Fogarty’s mHealth research grant program.
The 4-day event brought together nearly 50 faculty members and trainees - including behavioral and social scientists, physicians, nurses, computer scientists and engineers. The diversity was intended to help participants recognize the variety of experts needed for robust mHealth research, and to begin cultivating those connections.
“Bring the behaviorist in early,” advised Dr. Donna Spruijt-Metz of the University of Southern California. “Smartphones are allowing us to think about behavior dynamically - in real time and in context,” she noted. Understanding behavior will help determine which actions to influence, which interventions to use, and when and where to deliver them because, as she emphasized, “Context is king.”
Trainees were encouraged to look at the whole health system, and identify gaps in the infrastructure, before starting a project. “If you don’t have the resources, the phone is just a gadget,” said Dr. Magaly Blas, a former Fogarty fellow and current grantee who holds academic positions in Peru and the U.S. She described one of her initiatives that’s helping pregnant women in remote areas of Peru connect with a medical ship that makes stops along the Amazon River.
Several presenters stressed the importance of understanding the community’s culture and involving stakeholders, such as the end user and government and local leaders, when introducing mHealth into a population. “This does not mean they will throw away their challenges to what you are doing - whether cultural, religious or spiritual,” explained Olasupo Oyedepo, who directs a digital health project in Nigeria. “It will, more importantly, help you understand what their issues are, and until you understand those issues, you will not be able to find a middle ground.”
While mHealth interventions can democratize health care and help reach broader populations, they must be deployed thoughtfully. “We do want to be careful not to exacerbate existing inequalities or create new ones by releasing high-value technologies into communities without thinking how that might affect local realities and power dynamics,” cautioned Dr. Rachel Hall-Clifford of Agnes Scott College in Georgia. Faculty also reminded trainees to ensure information is transmitted securely and conforms with a country’s data standards so it can be integrated into electronic health records.
Mobile health research in LMICs requires creative thinking by a specialist in technology. Dr. Gari Clifford of Emory University described his ongoing project, funded through Fogarty, in rural Guatemala to monitor fetal and maternal health during pregnancy. He took a $17 dollar ultrasound device, augmented it with a mobile phone and cloud infrastructure, to create a tool that allows a midwife to conduct an ultrasound, signal for help in an emergency, and upload the data to a medical record. He used it as a case study to show how he combined three communications modalities - voice, text, and Wi-Fi - to transmit data.
When working with wearable devices, involving the user in the design process is important. “Not only are you going to design a better system, but the people who participate are going to be a lot more motived to use it,” explained Dr. Maribeth Gandy of Georgia Tech.
Researchers also learned different ways to design randomized trials to test their hypotheses. During her talk on experimental designs, Dr. Inbal Nahum-Shani of the University of Michigan noted that she learned a lot and is still collaborating with researchers she met during an NIH mHealth training several years ago. She said the Fogarty event took the exchange of ideas even further because of the diversity of trainees. “They bring in unique knowledge that is associated not only with their discipline but also with their country and culture,” she said. “Such exchange of knowledge has tremendous potential for generating new and exciting ideas that will advance the science of mHealth.”
Indeed, organizers said several trainees noted they plan to apply for mHealth grants with collaborators they met at the institute, and others talked about replicating the training at home.