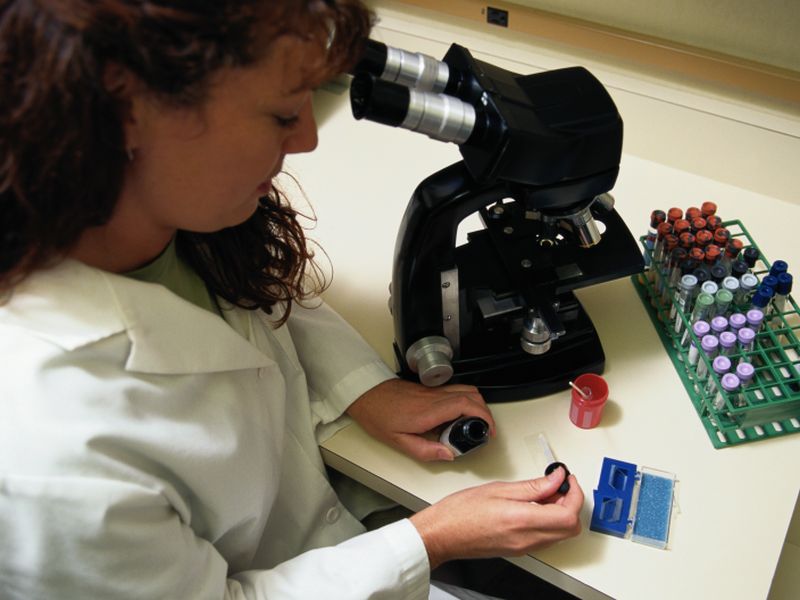 THURSDAY, May 19, 2016 (HealthDay News) -- "Precision" cancer treatment that's guided by genetic clues from the patient's own tumor appears to outperform traditional chemotherapy, a new research review finds.
Patients given precision -- or personalized -- treatment experienced a tumor shrinkage rate six times that attained by regular chemotherapy. But, that only happened if doctors used genetic information to choose the appropriate targeted therapy, said lead researcher Maria Schwaederle.
Those patients also experienced nearly double the length of time before their cancer resumed growing, according to the analysis of nearly 350 clinical trials.
"It is not just that the therapies are better, but that targeted therapies must be given to the right patients," said Schwaederle, who's with the University of California, San Diego School of Medicine's Center for Personalized Cancer Therapy.
She will present these results at the American Society of Clinical Oncology's annual meeting in Chicago next month. But until they're published in a peer-reviewed medical journal, data and conclusions presented at meetings are usually considered preliminary.
Precision medicine aims to treat cancer by targeting the unique DNA mutations that allow tumors to grow and spread, according to the U.S. National Cancer Institute.
Drugs developed under this approach might help the immune system better find and destroy cancer cells; block cancer-cell division; stop signals that form new tumor-feeding blood vessels; or order the cancer cells to commit suicide, the cancer institute says.
This new study shows the potential power of precision medicine, if a specific drug is available to treat a specific cancer, said Dr. David Hyman, a medical oncologist and director of developmental therapeutics at Memorial Sloan Kettering Cancer Center in New York City.
"To me, these results are not at all surprising," Hyman said. "If you put a patient with the right mutation on the right drug, they do better than if you put them on a drug that has nothing to do with their tumor."
Examples of targeted therapies include the lung cancer drug erlotinib (Tarceva), the melanoma drug dabrafenib (Tafinlar), and the breast cancer drug trastuzumab (Herceptin). All inhibit cancer by interfering with the signals that spur tumor growth, Hyman said.
In this study, Schwaederle and her colleagues analyzed 346 phase 1 clinical trials published between 2011 and 2013. All told, the trials involved more than 13,200 patients.
Those trials included 58 treatment arms that employed precision medicine, using tumor data to select patients for treatment, and 293 that did not.
Treatment arms employing precision medicine achieved tumor shrinkage rates of about 31 percent, compared to about 5 percent in those that did not match a person's cancer to the drug being tested, the study found.
Patients in precision medicine arms also had nearly twice the progression-free survival -- time spent on medication before their cancer resumed progression -- with an average of 5.7 months compared with 2.9 months.
Researchers also found that basing therapy on a patient's DNA indicators outperformed use of protein indicators, 42 percent to 22.4 percent.
"If we select patients that have the anomaly that is targeted by the drug, it is pretty intuitive that we can observe better response rates," Schwaederle said.
Phase 1 trials are generally considered a basic first step that determines whether a drug is safe to take. But these study findings suggest that cancer patients might receive lifesaving treatment if researchers take the time to analyze their cancer beforehand, Hyman said.
Because these results occurred in phase 1 trials, they show that it's never too soon to use genetic information to match a patient to the right drug, Hyman said.
Previous analyses of phase 2 and phase 3 trials by the same team also found improved outcomes with precision medicine, and the researchers argued that such benefits can be had during phase 1 trials as well.
"If we're not making that effort, then we're not doing the best we can do" for patients participating in early clinical trials, Hyman said.
SOURCES: Maria Schwaederle, Pharm.D., Center for Personalized Cancer Therapy, University of California, San Diego School of Medicine; David Hyman, M.D., medical oncologist and director, developmental therapeutics, Memorial Sloan Kettering Cancer Center, New York City; news release, American Society of Clinical Oncology, annual meeting, Chicago, June 2016
HealthDay
Copyright (c) 2016 HealthDay. All rights reserved.
News stories are provided by HealthDay and do not reflect the views of MedlinePlus, the National Library of Medicine, the National Institutes of Health, the U.S. Department of Health and Human Services, or federal policy.