MercatorNet: Young believers and the forces of secularism

MercatorNet: Young believers and the forces of secularism

Young believers and the forces of secularism

A new study points to anti-Christian prejudice in English schools. 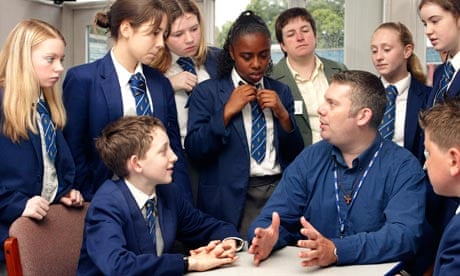 Pupils in a Religious Education class. Photograph: David Sillitoe / Guardian
“I am torn between two different ways: everyone’s saying he’s [God’s] not real, everyone saying I’m wasting my time and I should be an atheist like them.”
(Toni, an 11-year-old English schoolgirl)
In a column in the New York Times a few days ago self-styled progressive Nicholas Kristoff called for a more representative presence of conservatives and Christians in academic positions. This was prompted by the experience of a black sociologist, George Yancey, an Evangelical:

Yancey conducted a survey in which up to 30 percent of academics said that they would be less likely to support a job seeker if they knew that the person was a Republican. And if they knew he was an Evangelical his case would be even more hopeless: 59 percent of anthropologists and 53 percent of English professors would be less likely to hire him or her.
This, obviously, will have its effect on college students, despite the US being more religious than practically any other developed country.
Than Britain, for example.
A young Christian in the UK does not have to wait until university to find the dice loaded against their faith and values. A new study of secondary school students from various Christian denominations in England indicates that if a young believer practises their faith they may face prejudice from classmates and teachers alike.
It’s a very small study – just 26 adolescents aged 11 to 19, affiliated with Anglican, Catholic and Baptist parishes – but you have to start somewhere. Daniel Moulin, who reports his study in the current Journal of Contemporary Religion, notes that compared with Muslim youth, relatively little sociological research has been undertaken to explore reported experiences of anti-Christian prejudice.
Yet it happens. The young volunteers recruited by Moulin and attending 10 different schools, including Catholic and Anglican public schools, had encountered slurs, bullying, lack of respect for Christianity, and hostile questioning about the rationality of their beliefs.
For Evangelical Anglican students “Bible-basher” was the most common slur. Tobias, 15, found it and “other stuff” written on a table in his form room; Sheila, 17, was hassled in the same way during a school trip when some fellows found a Bible app on her mobile phone.
Ben, 13, has had the odd person at his Catholic school bait him about the Pope and sexual issues:

“stuff like Catholics are not allowed to use condoms or giving the world Aids … or ‘Ben, did you get raped by the Pope?’’’

These jibes label Ben “as a conservative political adversary to progress and an impediment to the amelioration of the poor,” Moulin notes. And, while they have historical precedents, they also reflect tropes propagated by New Atheists like Richard Dawkins.
Anti-Christian behaviour in church-affiliated schools
The fact that even at church affiliated schools young people have to get used to “You’re a Christian! You don’t believe in abortion!” being a sneering reference to the low status of their faith, indicates just how beleaguered young Christians are in a rapidly secularising society.
An Australian study referred to by Moulin also found that some practising Catholic students at Catholic schools were picked on by their peers; an altar server was nicknamed “church boy” in his school.
Jodie, 13, and Daniella, 14, among a minority at their Catholic school in England who practise their faith, have learned that it is “not cool” to be religious. They have been asked by fellow students “Why do you believe in God?” and “Do you believe God rose again in heaven?”
And this happens in religious education classes, not just in the playground or locker room.
Ellen, 16, who belongs to a charismatic Anglican church, was made to feel her style of worship was “really weird” during a class on the topic illustrated by a video.

“And I kinda felt like that was me being attacked. And I felt like really really defensive.”

Anne, 14, describes a class at her Anglican school during which students criticised and mocked both her faith and that of a girl whose family were New Age Pagans. When the pagan girl exploded in anger she got an apology, but when Anne tried to explain her beliefs she got talked down.
Ambrose, 15, believed that Catholicism was placed lower than Islam in peer group hierarchies. Muslim students are protected from slurs, he said, because

“it is a new religion, whereas people have got used to Catholicism,” but even more by the racial factor: “…if you … question an Islamic belief you can quite easily be seen as a racist”

whereas there is no equivalent boundary between “white” students with different beliefs.
When their peers did discuss religion with them, said the study participants, it tended to be in an assertive or “accusing” way, with references to the Pope (the interviews took place around the time that Pope Benedict XVI was visiting England and Richard Dawkins had called for his arrest over alleged inaction in the clerical sex abuse scandal) or more generally to the problem of evil. Said Brian, a 19-year-old Baptist:

“The biggest problem is: why do bad things happen … and they [peers] ask you all these questions … if there is a God, why does this happen?”

When teachers are also against your faith
Obviously churches need to help young people with questions like that. But so should teachers, at least by creating the conditions for a fair hearing on all sides. However, some young people in the study experienced just the opposite. Meg, 14, and an Anglican said:

I find that hard [defending God], especially in PRE [philosophy and religious education]; they question you [teachers and peers] and all you can say is “that’s not true” and they always ask, “why isn’t that true?”, and it’s like I say “because I know it is”, but they still question everything.
I think I can understand all the questions they are asking because I have quite a logical mind, so I think about things logically. It’s like I know the answers, but I don’t. Like they don’t understand it.

Philosophy and religion is hard for me because it’s against God rather than being for God. Our teacher is always going on about “if God exists, then why does he let all these things happen?” and he always has all these arguments and debates throughout... I don’t see how that is religion; he’s pretty much telling us how there mustn’t be a God because of all these bad things that happen.”

While the young Christians tended to play down the distress and offence that their peers’ jibes caused them, some were very concerned about bullying and its relationship to their Christian identity. And the combined effect of peers’ and teachers’ bias in a class setting made 11-year-old Toni say:

[I am] torn between two different ways: everyone’s saying he’s [God’s] not real, everyone saying I’m wasting my time and I should be an atheist like them.

On top of that, the media were no help. Television typically showed religious young people as “uncool” in appearance and behaviour, straight-jacketed by rules while their peers were experimenting with drinking, sex and smoking.
The challenges of increasing polarisation
Despite its small size and dealing only with the victims’ perspective, Moulin says his study (carried out as a doctoral student at Oxford University) reveals experiences consistent with research that suggests there is increasing polarisation between secular and religious positioning in the UK.
Issues for debate include:
* Is anti-Christian discrimination just as abhorrent as racism or anti-Semitism? “It is likely,” says Moulin, “that disparaging attitudes and behaviours towards Christians are more acceptable because they are positioned against traditionally hegemonic power structures, such as the Established Church.” Also, other notable forms of discrimination are reinforced by race.
* Is anti-Christianism really prejudice? The classic definition of prejudice sees it as a failure of rationality, but New Atheists claim that Christianity is irrational, so their attack on its beliefs and influence is not prejudice but “a right of free thinkers in a liberal society”.
* Are the media reinforcing anti-Christian prejudice?
* Is (compulsory) religious education in Britain actually a secularising force?
* Is the situation for practising Christians really any worse today than it ever has been? The lack of data makes it difficult to say. Besides, “prejudice, contestation, and challenge may make religious identities stronger and provide impetus for identity construction” – in other words, opposition can have positive effects. On the other hand, “What young Catholic, Anglican, and Baptist Christians in England may lack in comparison to other minority groups, however, are strong ethnic or national ties and affiliations that may also support religious identifications…”
For churches and parents, not only young Christians, there are clearly challenges to address.
* Daniel Moulin (2016) Reported Experiences of Anti-Christian Prejudice among Christian Adolescents in England, Journal of Contemporary Religion, 31:2, 223-238, DOI: 10.1080/13537903.2016.1152679
- See more at: http://www.mercatornet.com/above/view/young-believers-and-the-forces-of-secularism/18034#sthash.Zcw9DmFJ.dpuf

Following political news can be a depressing occupation. Our lead story today is a rather negative look at the presumptive Republican nominee, Donald Trump. But for all his boorishness, The Donald has been trumped by the election of Rodrigo Duterte as president of the Philippines, who has promised to end crime, mostly by killing the criminals. His remarks about women eclipse any of Mr Trump's more colourful remarks.
In search of some light relief, I discovered the author of a new art form, Ken M, who has been hailed as "the most epic troll on the internet". He has become an internet celebrity, profiled in Gawker, Gizmodo and other geeky online magazines. His subtle but hilarious ploy is to play dumb and allow other commenters to criticise him. But he always seems to have the last laugh. “What I do is turn a toxic space into a source of belly laughter, so it’s not gross anymore,” he once explained.
It's an intriguing approach to humanising the internet. Sometimes it pays not to be too serious. See the article and video below.