Is your privacy safe on the internet? How do you know? Now that people store medical records in the cloud and record much of their lives on social media, privacy is essential.

But as the latest scandal shows, privacy is always at risk.

A group of Danish researchers from Aarhus University has just released a data set of 70,000 subscribers to the online dating site OkCupid. They obtained them by scraping (harvesting) the data of publicly available profiles. However, they did it without seeking permission from the website or asking for the consent of the subscribers.

According to Vox, the data, which was collected between November 2014 and March 2015, includes user names, ages, gender, religion, and personality traits, as well as answers to the highly personal questions the site asks to help match potential mates. The users come from all over the world.

The data was uploaded onto the Open Science Framework, a site which warehouses Big Data and makes it freely available to social science researchers.

Harvesting the personal details of subscribers violates a fundamental rule of social science research: people must give informed consent. But the lead researcher, a graduate student named Emil Kirkegaard, sneered at critics of his methodology. 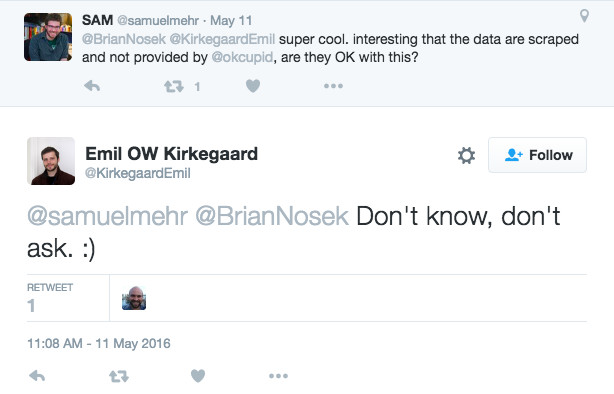 this is without a doubt one of the most grossly unprofessional, unethical and reprehensible data releases I have ever seen.

There are two reasons for that. The first is very simple; Kirkegaard never asked anyone. He didn't ask OKCupid, he didn't ask the users covered by the dataset - he simply said 'this is public so people should expect it's going to be released'.

This is bunkum. A fundamental underpinning of ethical and principled research - which is not just an ideal but a requirement in many nations and in many fields - is informed consent. The people you are studying or using as a source should know that you are doing so and why you are doing so.

Although no names are associated with the data, it has not been anonymized. It will be possible to identify the user from other information in the dataset.

The ethics of this escapade seem simple enough: it’s not ethical. Kierkegaard commented in an on-line journal:

However, as Michael Zimmer points out in Wired, “The most important, and often least understood, concern is that even if someone knowingly shares a single piece of information, big data analysis can publicize and amplify it in a way the person never intended or agreed.”
- See more at: http://www.bioedge.org/bioethics/hackers-download-okcupid-data-without-consent/11877#sthash.SEnZezNj.dpuf

The Global Priorities Project and the Future of Humanity Institute, both based at Oxford University, recently produced a Global Catastrophic Risk 2016 report. It’s less gripping than the Left Behind novels about the Second Coming of Christ (with titles like The Rapture: In the Twinkling of an Eye/Countdown to the Earth's Last Days), but, in its own dry, detached way, no less scary.
According to the Oxford experts’ calculations, extinction of the whole human race is reasonably likely.  Scientists have suggested that the risk is 0.1% per year, and perhaps as much as 0.2%. While this may not seem worthwhile worrying about, these figures actually imply, says the report, that “an individual would be more than five times as likely to die in an extinction event than a car crash”.
What sort of calamities are we talking about? Collision with an asteroid, the eruption of a super-volcano, extreme climate change, a bio-engineered pandemic, or even a super-intelligent computer declaring war on wetware humanity.
Tiny probabilities add up, so that the chance of extinction in the next century is 9.5% -- which is worth worrying about. And of course, a mere global catastrophe, involving the death of a tenth of the population, is far more likely. That is a very startling statistic.
However, even at Oxford they make mistakes. Within days of issuing the Global Catastrophic Risk 2016 report, the experts were eating humble pie. A mathematician reviewed its calculations and concluded that “the Future of Humanity Institute seems very confused re: the future of humanity”. The authors had to give more nuance and context to their most startling statistic. It doesn’t inspire a lot of confidence in the ethics of existential risk.

Medicine in India #2 – IVF for septuagenarians
by Xavier Symons | May 14, 2016
A woman in India thought to be in her 70s has given birth to a baby boy

Medicine in India #1 – limb surgery
by Xavier Symons | May 14, 2016
Limb surgery is becoming an increasingly common procedure among middle-class Indians.

Does fear change behaviour?
by Michael Cook | May 14, 2016
Bioethicists claim that fear-based public health campaigns are effective and not necessarily stigmatising

Pfizer to stop supplying drugs for executions
by Michael Cook | May 14, 2016
But will it continue to supply them for euthanasia?

Paris conference investigates CRISPR potential
by Michael Cook | May 14, 2016
All the highlights

One of America’s finest novelists tackles life extension
by Michael Cook | May 14, 2016
As Don De Lillo approaches 80, he meditates upon death
BioEdge