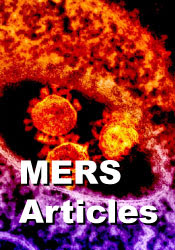 MERS is an illness caused by a virus called Middle East Respiratory Syndrome Coronavirus (MERS-CoV). MERS affects the respiratory system. Most MERS patients developed severe acute respiratory illness with symptoms of fever, cough and shortness of breath. Health officials first reported the disease in Saudi Arabia in September 2012. Through retrospective investigations, health officials later identified that the first known cases of MERS occurred in Jordan in April 2012. MERS-CoV has spread from people with the virus to others through close contact, such as caring for or living with an infected person.
Click on the links below to learn more about this important topic.

The conclusions, findings, and opinions expressed by authors contributing to this journal do not necessarily reflect the official position of the U.S. Department of Health and Human Services, the Public Health Service, the Centers for Disease Control and Prevention, or the authors' affiliated institutions. Use of trade names is for identification only and does not imply endorsement by any of the groups named above.
Publicado por salud equitativa en 4:25