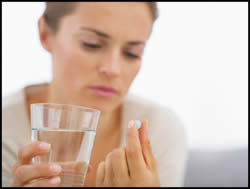 Opioids pose an increased risk for adverse outcomes if taken during pregnancy.

Opioid-containing medications are widely prescribed among reproductive-aged women with either private insurance or Medicaid, with approximately one fourth of privately insured and over one third of Medicaid-enrolled women filling a prescription for an opioid each year during 2008–2012. In addition, CDC found an average of three opioids prescribed for every four privately insured women and nearly two opioid prescriptions for every one Medicaid-enrolled woman per year. This is a significant public health concern given evidence of adverse pregnancy outcomes with opioid exposure, the likelihood of exposures occurring among unrecognized or unintended pregnancies, and health care provider concerns about using other pain medications during early pregnancy (2,4,5).
This analysis presents data among all reproductive-aged women; however, previous studies from slightly earlier time periods have reported data among women who were actually pregnant. In general, more reproductive-aged women filled a prescription for an opioid in this study compared with what has been found among pregnant women. In a study of approximately 534,000 pregnant women with private insurance during 2005–2011, 14.4% filled a prescription for an opioid during pregnancy (6). In a study of approximately 1.1 million Medicaid-enrolled women nationwide with pregnancies during 2000–2007, 21.6% filled a prescription for an opioid from an outpatient pharmacy during pregnancy (7), and opioid dispensing increased over time. Similar to the findings in this report, these two previous studies of pregnant women also reported hydrocodone, codeine, and oxycodone as among the opioids most commonly dispensed by outpatient pharmacies.
The consistently higher frequency of opioid prescribing to Medicaid-enrolled women is of concern because approximately 50% of U.S. births occur to Medicaid-enrolled women (8). Other studies have found higher opioid prescribing rates to Medicaid-enrolled populations as compared with privately insured populations, but these have not specifically assessed use in reproductive-aged women. One study showed that, in 2005, 17% of a sample of persons aged ≥18 years enrolled in a multistate private insurance plan received an opioid prescription, compared with 30% of those enrolled in Arkansas Medicaid (9). These differences by health care coverage type might reflect differences in health plan drug formularies, differences in patient use of health care services based on health care coverage, or differences in the prevalence of underlying health conditions among Medicaid recipients compared with persons covered by employer-provided private health insurance.
Geographic region was available for the privately insured claims data and showed opioid prescription rates were highest among reproductive-aged women residing in the South and lowest in the Northeast. Race/ethnicity was available for Medicaid data, and indicated opioid prescriptions were nearly 1.5 times higher among non-Hispanic white reproductive-aged women than among non-Hispanic black or Hispanic women. Other reports of opioid prescribing patterns have shown similar geographic trends, with the South having the greatest number of prescription opioid claims (1,6,7), and white women being more likely than women of other racial/ethnic populations to fill an opioid prescription (7).
Although there appeared to be a decline in the frequency of opioids prescribed to both privately insured and Medicaid-enrolled women of reproductive age from 2009 to 2012, any conclusions about changes over time must be interpreted with caution. The apparent decline might indicate improvements in opioid prescribing practices; however, given the potential changes in the composition of the sample used for the privately insured claims data and in the states included in the Medicaid sample each year, this conclusion cannot be drawn from these data. At least one study has noted a decrease in opioid prescriptions among pregnant women, with a decline from 14.9% in 2005 to 12.9% in 2011 (6), although studies focused on earlier time periods have not noted such a decline (7,9). Notably, recently implemented federal regulation of certain opioid medications, such as hydrocodone, might decrease use in these populations (10).
The findings in this report are subject to at least four limitations. First, Truven Health's MarketScan Commercial Claims and Encounters and Medicaid data are samples and might not be generalizable to the entire U.S. population. Although the privately insured claims data represent approximately 4–6 million insured persons, it is likely that they are only representative of persons with employer-based private insurance. The 10–13 states that contribute their data to the Medicaid sample each year do so anonymously. Therefore, changes over time in the Medicaid data might reflect changes in the sample of states, instead of broader changes among the Medicaid-enrolled population. It is also likely that certain women will be included in multiple years of either the Commercial Claims and Encounters or Medicaid data. Second, pregnant women were not identified in this analysis; the study population was based on female sex and age 15–44 years alone. Whether opioid prescriptions were limited to infertile or contracepting women was not ascertained. Third, these analyses likely underestimate opioid use, because the data only represent outpatient pharmacy claims. No information on inpatient opioid use, opioids obtained without a prescription, or opioids paid for out-of-pocket was available. Finally, although these data represent opioids dispensed by outpatient pharmacies, there was no verification that women actually took the medications.
This analysis used a large database to estimate the proportion of privately insured and Medicaid-enrolled reproductive-aged women who filled a prescription for an opioid from an outpatient pharmacy. Many women need to take opioid-containing medications to appropriately manage their health conditions; however, in some instances safer alternative treatments are available and use of opioids is unnecessary. Having a better understanding of prescription opioid use just before and during early pregnancy can help inform targeted interventions to reduce unnecessary prescribing of opioids and provide evidence-based information to health care providers and women about the risks of prenatal opioid exposure.
1Division of Birth Defects and Developmental Disabilities, National Center on Birth Defects and Developmental Disabilities, CDC (Corresponding author: Jennifer Lind, jlind@cdc.gov, 404-639-3286)