Interim Guidance on Testing, Specimen Collection, and Processing for Patients with Suspected Infection with Novel Influenza A Viruses with the Potential to Cause Severe Disease in Humans

Flu activity is high across most of the country with flu illnesses, hospitalizations and deaths elevated. Flu season will probably continue for several weeks.
While the flu vaccine is not working as well as usual against some H3N2 viruses, vaccination can still protect some people and reduce hospitalizations and deaths, and will protect against other flu viruses.
Influenza antiviral drugs can treat flu illness. CDC recommends these drugs be used to treat people who are very sick or who are at high risk of serious flu complications who have flu symptoms. Early antiviral treatment works best.
.... 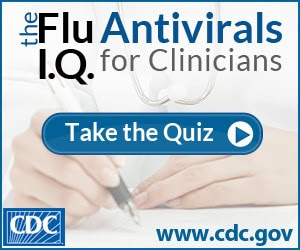 Test your knowledge of influenza antiviral drugs with the new Influenza Antiviral Quiz for Clinicians.
....

Prompt Use of Antivirals is Key this Flu Season

Antiviral influenza (flu) medications are effective in treating the flu and reducing complications, and are critical tools for reducing the burden of flu illness. Unfortunately, evidence from previous and the current flu season suggest that flu antiviral drugs are severely underused.
Influenza activity in the United States is widespread and likely to continue for weeks. Read more about what physicians can do.
Publicado por salud equitativa en 4:59