Email this page to a friendShare on facebookShare on twitterBookmark & SharePrinter-friendly versionSubscribe to RSS
The vascular system is the body's network of blood vessels. It includes the arteries, veins and capillaries that carry blood to and from the heart. Problems of the vascular system are common and can be serious. Arteries can become thick and stiff, a problem called atherosclerosis. Blood clots can clog vessels and block blood flow to the heart or brain. Weakened blood vessels can burst, causing bleeding inside the body.
You are more likely to have vascular disease as you get older. Other factors that make vascular disease more likely include
Losing weight, eating healthy foods, being active and not smoking can help vascular disease. Other treatments include medicines and surgery. 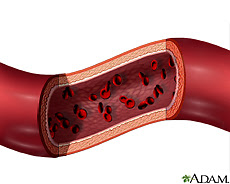 The kidneys cleanse the blood of waste products, balance the electrolytes in the body, control blood pressure and stimulate the production of red blood cells. They receive their blood supply through the renal arteries directly from the aorta, the largest artery that carries oxygen-rich blood from the heart to other organs in the body.
The kidneys are extremely sensitive to any decrease in blood flow. When renal artery narrows due to plaque buildup (stenosis) and blood flow is restricted to even one kidney, high blood pressure (hypertension) can occur. Renal artery stenosis causes about 5% of all cases of hypertension and can reduce kidney size. When the stenosis involves both kidneys, it can also lead to impaired kidney function (renal failure). Stenosis of both renal arteries is a major cause of renal failure in the elderly.


Cause and Diagnosis of Renal Artery Stenosis

There are two main causes of renal artery stenosis. In younger patients, thickening of the muscular wall of the artery, called fibromuscular dysplasia (FMD), is the usual cause. In older patients, narrowing from cholesterol-rich plaques in the artery (arteriosclerosis) is the most common cause.
Primary hypertension can not only damage the renal arteries, but also the kidneys. There is a direct relationship between uncontrolled high blood pressure and increased risk for stroke, heart attack, heart failure, renal failure and vision problems. The medical terms for this kind of renal failure, which can be caused by either primary or secondary hypertension, are chronic renal failure or end state renal disease (ESRD).
Diagnosing Renal Artery Stenosis
Secondary hypertension, which has an identifiable cause, is usually suspected in children, adolescents and young adults when there is an abrupt onset of high blood pressure. It also frequently occurs in patients whose high blood pressure is poorly controlled despite usual therapy, including medications. In these cases, renal artery stenosis can be detected by physical examination or special tests:

Treatments that can improve blood flow to the kidneys and reduce blood pressure include:
Kidneys that are failing, or have failed, can no longer efficiently remove waste products from the body. When the waste products reach a toxic level, they can be removed artificially through dialysis, or a kidney transplant can be performed.
A person with renal failure can be treated with an artificial kidney machine (dialysis) which removes toxins from the blood. Patients requiring ongoing dialysis use the artificial kidney machine up to three times a week to manage their kidney failure.
Note: Dialysis requires a surgically-created artery-to-vein (arteriovenous) direct connection or a prosthetic graft inserted in the patient's arm or leg. This artificial circuit often fails due to poor or blocked flow and must be surgically repaired or replaced to continue treatments. The cause of failure is abnormal scarring and thickening of the lining of the vein that receives the blood from the artery. A vascular surgeon performs a vascular access procedure to create a connection, usually an artificial graft that connects an artery and vein in the patient’s arm. This allows the dialysis machine to be connected directly to the patient’s bloodstream.
You can lower your risk of high blood pressure and kidney disease with a healthy lifestyle, including: