Trying a New Line of Attack in Heart Disease - WSJ.com

Trying a New Line of Attack in Heart Disease - WSJ.com


Trying a New Line of Attack in Heart Disease

Two major clinical trials are testing for the first time whether treating inflammation can reduce the risk of a heart attack or stroke, potentially opening up a new line of attack in the battle against cardiovascular disease. 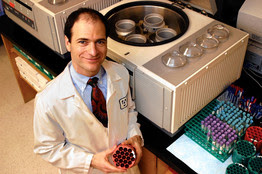 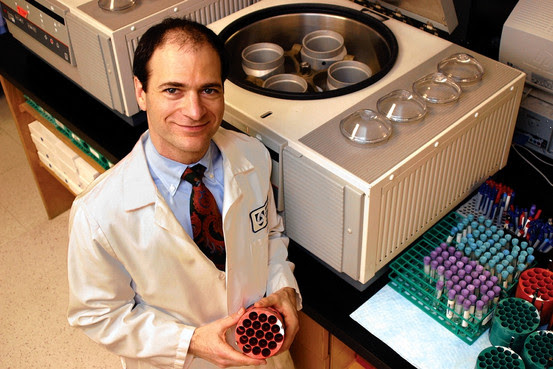 Brigham and Women's Hospital
'This goes beyond simply asking, is inflammation a marker of risk to asking if it's a target for therapy,' said Paul M. Ridker, who is leading the two trials.
Until now, strategies to fight these killers have focused largely on well-known risk factors such as high blood pressure and cholesterol. The new studies, one sponsored by the National Institutes of Health and the other by pharmaceutical giant Novartis SA, NOVN.VX -0.53% will test the hypothesis that inflammation plays a crucial role in the underlying biology that makes heart disease and stroke the No. 1 and No. 4 causes of death in the U.S., respectively.

Inflammation is part of the body's normal healing response to injury. When the walls of the coronary arteries or the vessels that carry blood to the brain suffer injury from the effects of smoking, obesity and abnormal cholesterol, for instance, the immune system as part of the inflammatory response dispatches cells to repair the damage, researchers say. But in the face of a constant assault by such irritants over decades, possibly abetted by genetics, that system can go into overdrive. Instead of protecting the vessels, inflammation becomes chronic, leading to the accumulation and potential rupture of arterial deposits called plaque that can cause heart attacks and strokes.
Research over two decades has shown that people with chronic inflammation—detectable at low levels, for instance, with a high-sensitivity test for a marker called C-reactive protein—are at significantly higher risk of heart attack and stroke compared with those with evidence of little or no such inflammation.
But whether the risk can be mitigated by inhibiting or shutting down the process with anti-inflammatory drugs isn't known.
"This goes beyond simply asking, is inflammation a marker of risk (for cardiovascular disease) to asking if it's a target for therapy," said Paul M. Ridker, director of the center for cardiovascular-disease prevention at Harvard-affiliated Brigham and Women's Hospital in Boston, who is leading both trials. 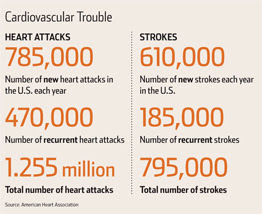 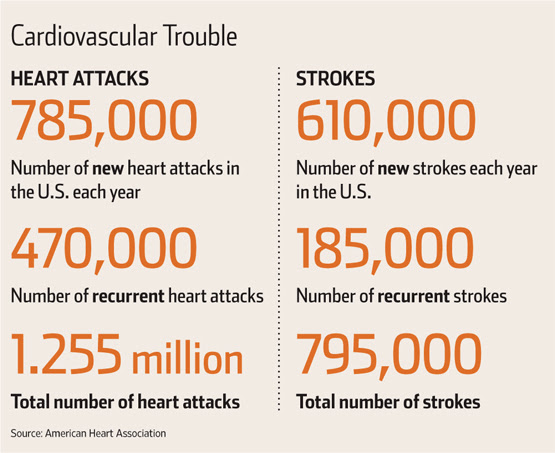 Significant progress has been made against heart attacks and strokes in recent years, thanks to what researchers believe is the cumulative impact of prevention strategies that include more aggressive use of cholesterol and blood pressure drugs, anti-smoking initiatives and better exercise and dietary habits. Heart attack admissions among the elderly fell by nearly 25% in the five years ended in 2007, a recent study showed, while stroke deaths declined by nearly 20% in the decade ended in 2008.
Still, both problems exact a heavy toll. More than 1.25 million Americans suffer a heart attack each year, according to the American Heart Association, while nearly 800,000 have a stroke.
"If you could find a way to dramatically reduce the incidence of heart attacks by blocking inflammation, that would change the practice of medicine," said Mark Fishman, a cardiologist and president of the Novartis Institutes for BioMedical Research.
The new trials mark the latest effort to take prevention efforts beyond conventional strategies.
The NIH study will test whether the widely used generic anti-inflammatory drug methotrexate can reduce major cardiovascular events in 7,000 patients with a history of heart attack—who also have either diabetes or a cluster of prediabetic risk factors known as the metabolic syndrome. Enrollment is expected to begin at more than 350 sites in the U.S. and Canada next March.
These are especially high-risk patients for whom current optimal treatment often fails. "We've kind of run out of our tool kit for these individuals and yet they're still having events," said Gary Gibbons, director of the NIH's National Heart, Lung and Blood Institute, which officially funded the study.
The Novartis trial, which is testing the company's anti-inflammatory antibody called canakinumab, has already enrolled 3,000 patients of a planned 17,000 patients with stable cardiovascular disease and elevated levels of inflammation. (The drug is marketed under the brand name Ilaris for a rare inflammatory disease called Muckle-Wells Syndrome.) In proof-of-concept studies, it yielded what Dr. Fishman called "provocative" evidence of benefit in coronary arteries.
But it will take the much-larger study to determine whether it actually prevents serious complications of cardiovascular disease.
Both drugs directly target certain inflammatory pathways with little if any effect on other cardiovascular risk factors. Current preventive medications, including aspirin, which inhibits blood clotting, and cholesterol-lowering statins, which reduce LDL or bad cholesterol, a key heart- and stroke-risk factor, also lower inflammation. Thus in studies showing benefits of both drugs, "we can't tease apart whether lowering inflammation alone has an incremental benefit," Dr. Ridker said.
Finding a benefit may be a challenge in the big trials. All participating patients will be treated with optimal therapy, meaning that those in the anti-inflammatory arms of each study will also be given statins and be compared against patients who are on aggressive statin and other therapies that may also reduce inflammation.
"The question is how difficult will it be to get above and beyond" the benefit of current treatments, said Michael Miller, director of the center for preventive cardiology at University of Maryland Medical Center. "The problem is the placebo group is going to be very well treated."
Indeed, many researchers believe the effectiveness of current therapy has proved a daunting hurdle to efforts to develop new cardiovascular drugs. Niacin and an experimental drug known as a CETP inhibitor—both of which raise HDL or good cholesterol—failed in recent studies to reduce heart risk when added to statin treatment. Other studies intending to show benefit from raising HDL cholesterol are in progress.
One of the first hints that treating inflammation might reduce cardiovascular disease risk came in 1997 in a report led by Dr. Ridker from the so-called Physicians Health Study—the study that a decade earlier had demonstrated the benefit of daily aspirin in preventing heart attacks. Dr. Ridker found that elevated inflammation as measured by levels of C-reactive protein was associated with a threefold risk of heart attack and a doubling of stroke risk. Those with the highest C-reactive protein levels got the most benefit from aspirin.
The findings and subsequent research led to development of a high-sensitivity test for C-reactive protein that many doctors now use to help assess patients' heart and stroke risk. (Dr. Ridker is listed as an inventor on patents held by Brigham and Women's Hospital for such a test, but he said neither he nor the hospital will receive royalties for any of the tests used in either of the two new studies.)
How useful the test is in assessing heart risk has provoked controversy among cardiologists, but there is broad consensus that inflammation is an important player in the development of cardiovascular disease.
"So the question becomes, if we inhibit inflammation, can we get benefit?" Dr. Ridker says. "And we'll see."
Write to Ron Winslow at ron.winslow@wsj.com

A version of this article appeared September 4, 2012, on page D2 in the U.S. edition of The Wall Street Journal, with the headline: Trying a New Line of Attack in Heart Disease.
Publicado por salud equitativa en 5:49