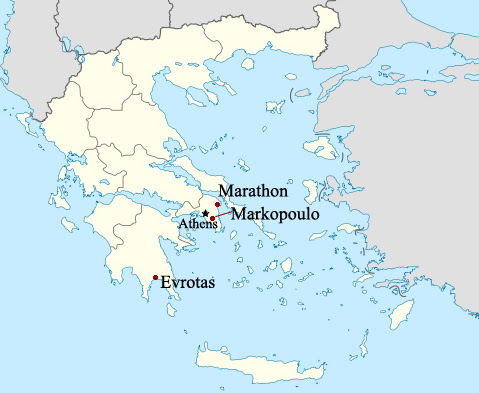 A map of Greece showing the locations of Athens, Evrotas, Markoupolo, and Marathon.
The Centers for Disease Control and Prevention (CDC) has received information that there have been 11 additional P. vivax malaria cases identified in Greece; two locally-acquired cases in Greek residents with no previous travel, two possible relapses in patients who had locally-transmitted malaria in 2011, and seven cases in immigrants. Between January 1 and September 3, 2012, Greece has reported a total of 50 cases of malaria. Forty-two of those 50 cases occurred among immigrants from malaria-endemic countries and are thus believed to have been imported. However, some of these cases may have been locally acquired.
One of the new cases had onset of symptoms the first week of August and is believed to have acquired the infection in Evrotas in the Laconia (southeastern Peloponnese) region. The agricultural area of Evrotas was the principal site of the 2011 P. vivax outbreak and was also where other locally-acquired cases were identified in June and July of 2012. The other new case is believed to have acquired infection in Markopoulo, in the East Attica region and had onset of symptoms the week of August 13th 2012. Other locally-transmitted cases have been identified in June and July of 2012 in Marathon and Markopoulo of East Attica region. Markopoulo is a suburban town approximately 30 km southeast of Athens. No malaria cases have been reported in Athens.
The Hellenic CDC continues to work with the European CDC and has responded by enhancing its surveillance systems for malaria cases and malaria vectors. In current- and previously affected- areas, mosquito control has been intensified, healthcare providers educated about early malaria diagnosis and treatment, and the public has been informed about the symptoms of malaria and the prevention of mosquito bites.
CDC recommends preventive antimalarial drugs for travel to the agricultural areas of Evrotas in the Laconia region. Mosquito avoidance only is recommended in Marathon and Markopoulo in the East Attiki region. Travelers to these two affected areas of Greece should use mosquito avoidance measures, such as insect repellant and sleeping in either an air conditioned or well-screened setting or under a treated bed-net, to prevent malaria infection.
See the CDC Malaria website for additional health information about malaria including prevention of mosquito bites and drugs for malaria prevention. For general health information for travelers to all areas of the world, see the CDC Traveler's Health website.