URL of this page: http://www.nlm.nih.gov/medlineplus/bleeding.html
Also called: Hematoma, Hemorrhage
Bleeding is the loss of blood. It can happen inside or outside the body. Bleeding can be a reaction to a cut or other wound. It can also result from an injury to internal organs.
There are many situations in which you might bleed. A bruise is bleeding under the skin. Some strokes are caused by bleeding in the brain. Other bleeding, such as gastrointestinal bleeding, coughing up blood, or vaginal bleeding, can be a symptom of a disease.
Normally, when you bleed, your blood forms clots to stop the bleeding. Severe bleeding may require first aid or a trip to the emergency room. If you have a bleeding disorder, your blood does not form clots normally. 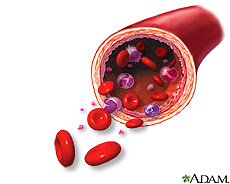