Key cells in the brain region known as the hippocampus are formed in the base of the brain late in fetal life and undertake a long journey before reaching their final destination in the center of the brain shortly after birth, according to researchers at the National Institutes of Health.

The hippocampus is involved with attention, navigation and converting short-term memories to long-term memories. Interneurons, the brain cell population the researchers studied, regulate communication between networks of brain cells. Previous research suggests that brain cell networks in the hippocampus may be disrupted in developmental disorders, including autism, as well as in epilepsy, Alzheimer’s disease and schizophrenia.

“The hippocampus seems to be at the crossroads of many disorders affecting the brain,” said Chris McBain, Ph.D., chief of the Laboratory of Cellular and Synaptic Neurophysiology at the NIH’s Eunice Kennedy Shriver National Institute of Child Health and Human Development (NICHD). “With these findings, we can begin to understand how proper communication is established in the brain and to investigate why sometimes it breaks down in this critical area.”

Their findings appear in The Journal of Neuroscience. 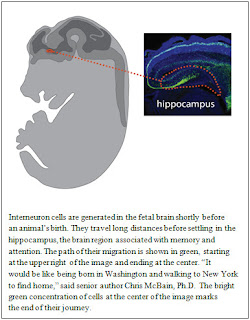 In their experiments, the researchers worked with two kinds of genetically altered mice. The researchers examined the brains of fetal mice and pups at various stages of development, from about two weeks after conception until the baby mice were 1 month old. Cells generated in the brains of the mice at each stage emitted light from a fluorescent protein they contained.

Comparing the number and location of fluorescent cells at the various stages, the researchers were able to create a composite image of the early development and migration of interneurons. The researchers also examined individual interneurons in the animals’ brains and catalogued nearly two dozen different types.

The researchers demonstrated that the brain produces large quantities of interneurons just before the mouse is born. Typically, brain cells reside in areas of the brain very close to where they are generated, Dr. McBain explained. But interneurons, the researchers discovered, take two to three days to travel across the brain to the hippocampus.

The remaining cells were integrated into the hippocampus and demonstrated typical activity, the researchers showed. In the normally functioning brain, Dr. McBain explained, interneurons are incorporated in circuits connecting structures in different areas. In the circuit, they brake or sometimes stop signals at decisive moments. Working in concert with other cells in the circuit, they coordinate waves of activity across the brain.

“This work shows how the early development of the hippocampus is distinct from the rest of the brain,” said Dr. McBain. “It may also help us decide where to look when signals passing through somehow miss their mark.”

The NICHD sponsors research on development, before and after birth; maternal, child, and family health; reproductive biology and population issues; and medical rehabilitation. For more information, visit the Institute’s website at http://www.nichd.nih.gov/.

About the National Institutes of Health (NIH): NIH, the nation's medical research agency, includes 27 Institutes and Centers and is a component of the U.S. Department of Health and Human Services. NIH is the primary federal agency conducting and supporting basic, clinical, and translational medical research, and is investigating the causes, treatments, and cures for both common and rare diseases. For more information about NIH and its programs, visit www.nih.gov.