Abstract
Reported incidence of dengue has increased worldwide in recent decades, but little is known about its incidence in Africa. During 1960–2010, a total of 22 countries in Africa reported sporadic cases or outbreaks of dengue; 12 other countries in Africa reported dengue only in travelers. The presence of disease and high prevalence of antibody to dengue virus in limited serologic surveys suggest endemic dengue virus infection in all or many parts of Africa. Dengue is likely underrecognized and underreported in Africa because of low awareness by health care providers, other prevalent febrile illnesses, and lack of diagnostic testing and systematic surveillance. Other hypotheses to explain low reported numbers of cases include cross-protection from other endemic flavivirus infections, genetic host factors protecting against infection or disease, and low vector competence and transmission efficiency. Population-based studies of febrile illness are needed to determine the epidemiology and true incidence of dengue in Africa. 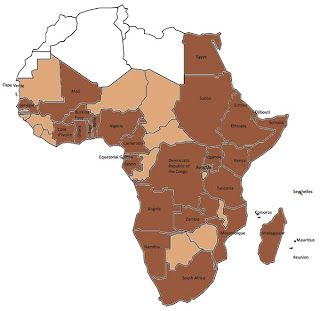 
Dengue has emerged in recent decades as a worldwide public health problem, particularly in the Asia–Pacific and Americas–Caribbean regions (1–3). In Africa, the epidemiology and public health effect of dengue is not clear. Aedes spp. mosquitoes are widely distributed in Africa and can serve as vectors of dengue virus (DENV). When their distribution is combined with rapid population growth, unplanned urbanization, and increased international travel, extensive transmission of DENV is likely in Africa (Figure) (2,4). Over the past 5 decades, cases of epidemic or sporadic dengue have been reported in many countries in sub-Saharan Africa (5). Although sporadic cases of dengue hemorrhagic fever (DHF) have been reported in a few countries in Africa, no outbreaks have been reported (1). However, when compared with the Asia–Pacific and Americas–Caribbean regions, the epidemiology and effect of dengue in Africa has not been defined. A dengue outbreak in Cape Verde was recently reported (>3,000 cases), and the reappearance of dengue in Senegal after 20 years was also reported (6). To estimate the extent of DENV infection and dengue in Africa, we reviewed published literature and other sources for reports of this disease in persons 1iving in or traveling to this region.

Suggested Citation for this Article

Comments to the Authors

Please use the form below to submit correspondence to the authors or contact them at the following address: