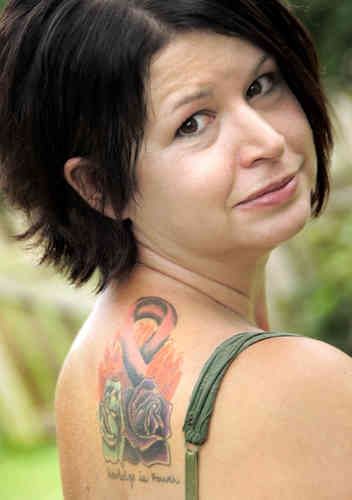 Andrea Lovelace has a BRCA-2 gene mutation, which dramatically raises a person's risk of developing cancer. Knowing she carries the gene spurred her to undergo surgeries that make it far less likely she'll be diagnosed with breast or ovarian cancer.
ROBERT A. MARTIN/THE FREE LANCE-STAR

Rare gene mutations raise risk of multiple cancers
Few carry breast cancer gene, but for those who do, the risks are great
Date published: 10/24/2010
BY JANET MARSHALL

Andrea Lovelace's grandfather, great-grandfather and uncle died of pancreatic cancer, and her father has been treated for prostate cancer, she said.

While it might seem odd that a family history of men with pancreatic and prostate cancer would raise her risk of breast cancer, Lovelace was worried--and rightly so.

The Fredericksburg woman's suspicions were confirmed when she tested positive for the BRCA-2 gene mutation about six years ago. This so-called "breast cancer gene" is linked to several cancers, including pancreatic and prostate cancer.

All cancer strikes fear, but testing positive for a BRCA-1 or BRCA-2 gene mutation can stir a unique kind of distress. The mutations, which can be found in men and in women, significantly raise the risk of getting cancer at an early age--often before 50.

The mutations raise the risk for many kinds of cancer--chiefly breast and ovarian cancer but also prostate and pancreatic cancer.

Tumors with the BRCA-1 mutation are often linked to "triple-negative" breast cancers, which don't respond to anti-estrogen therapies or to the drug Herceptin (generic name trastuzumab). This makes them more difficult to treat.

BRCA mutations are associated with "basal" cancers, which are more aggressive. The tumor cells may have spread long before the primary tumor is found.

THE 'GIFT' OF KNOWING

For Lovelace, testing positive was a blessing because it enabled her to take action to try to avoid getting cancer.

"I didn't feel angry about it," Lovelace said. "I was blessed with a gift."

Shortly after getting her test result, Lovelace said, she underwent a bilateral mastectomy. People with the BRCA-1 gene have as high as an 85 percent chance of developing breast cancer; for those with BRCA-2, it's reported to be as high as about 60 percent, Tucker said.

The Fredericksburg mother said she couldn't imagine waiting around to see what might happen if she didn't take action.

"I didn't ever question what I was going to do," Lovelace said.

Because of BRCA's link to ovarian cancer, Lovelace also had her ovaries and uterus removed.

"Now I guess the big concern is the pancreatic cancer link in my family," said Lovelace, 38. "I would remove my pancreas if I could."

Testing positive for it spurs "an obvious need for alertness," Tucker said.

Still, he said, current treatments can cure many patients with BRCA-related or triple-negative cancer.

"And if a patient with a triple-negative tumor survives five years from her diagnosis, the tumor has most likely been cured," Tucker said.

When people test positive for BRCA, Tucker said, options range from surveillance--with mammograms and possibly MRIs--to prophylactic surgeries such as removing the ovaries or breasts.

Along with undergoing those surgeries, Lovelace said, she is monitored regularly at Johns Hopkins University Hospital. So far, despite her family history and gene mutation, she has not been diagnosed with any kind of cancer.

WHEN TO GET SCREENED

On her back, near her right shoulder, Lovelace has a tattoo that says "Knowledge Is Power."

"I don't know why anyone wouldn't want to know," she said of carrying the breast cancer gene.


Lovelace said her 21-year-old daughter has been tested for the gene and doesn't have it. Her 8-year-old will be tested when she's 18, Lovelace said.

Meanwhile, Lovelace said, doctors are monitoring her pancreas and have found it to be "abnormal."

"But they're just unsure at this point what that means," she said. "They said they're finding it a lot in patients that have the BRCA-2 mutation and have a history of pancreatic cancer, but they're in such an early stage of the research."

More research is critical to improving the treatment and identification of BRCA-related cancers and triple-negative cancers, Tucker said.

In the meantime, patients can arm themselves with knowledge. Women should do breast self-examinations and get mammograms on a schedule recommended by their physicians, Tucker said.

Historically, women have been advised to start getting mammograms at 40; lately, some researchers have suggested that the age shift to 50.

The recent controversy over when to screen "has no bearing on women who are BRCA-positive," Tucker said.

"Screening in this group should begin when patients are in their late 20s," Tucker said.

Tucker said people wondering whether they carry the BRCA gene mutation should talk with a cancer specialist. Screening for the mutation might be recommended if:

Multiple first-degree relatives (parents or siblings) have been diagnosed with breast or ovarian cancer, especially at an early age.

A relative has had both breast and ovarian cancer, or cancer in both breasts.

A relative has been diagnosed with triple-negative cancer before age 50.

A family member has tested positive for the BRCA mutation.


--Kaitlin Mayhew contributed to this report.

Women with the inherited BRCA-1 mutation.