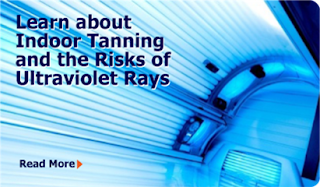 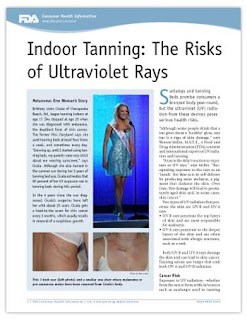 On this page:
Cancer Risk
Other Risks
Tanning in Children and Teens
FDA Regulation
The Riskiest Practices
Melanoma: One Woman's Story

“Although some people think that a tan gives them a ‘healthy’ glow, any tan is a sign of skin damage,” says Sharon Miller, M.S.E.E., a Food and Drug Administration (FDA) scientist and international expert on UV radiation and tanning.

“A tan is the skin’s reaction to exposure to UV rays,” says Miller. “Recognizing exposure to the rays as an ‘insult,’ the skin acts in self-defense by producing more melanin, a pigment that darkens the skin. Over time, this damage will lead to prematurely aged skin and, in some cases, skin cancer.”

Two types of UV radiation that penetrate the skin are UV-B and UV-A rays.

Cancer Risk
Exposure to UV radiation—whether from the sun or from artificial sources such as sunlamps used in tanning beds—increases the risk of developing skin cancer, according to the National Cancer Institute (NCI). Melanoma, the deadliest form of skin cancer, is linked to getting severe sunburns, especially at a young age.

In July 2009, the International Agency for Research on Cancer (IARC), part of the World Health Organization, concluded that tanning devices that emit UV radiation are more dangerous than previously thought. IARC moved these devices into the highest cancer risk category: “carcinogenic to humans.” Previously, it had categorized the devices as “probably carcinogenic to humans.”

Development of cancer is a long process that may take decades. Therefore, IARC also recommended banning commercial indoor tanning for those younger than 18 years to protect them from the increased risk for melanoma and other skin cancers.

IARC’s conclusions and recommendations were based on its 2006 review of 19 studies conducted over 25 years on the use of indoor tanning equipment. The review found evidence of

. an association between indoor tanning and two types of skin cancer: squamous cell carcinoma and melanoma
.. an association between UV-emitting tanning devices and cancer of the eye (ocular melanoma)
... both UV-A and UV-B rays causing DNA damage, which can lead to skin cancer in laboratory animals and humans
... the risk of melanoma of the skin increasing by 75 percent when tanning bed use started before age 35

IARC’s review had some limitations, says Ron Kaczmarek, M.D., M.P.H., an FDA epidemiologist who analyzed the review. Limitations include possible inaccuracy of people’s memories of their tanning experiences, not knowing the amount of UV radiation emitted by each tanning device, and the inability to separate the effects of individuals’ indoor and outdoor exposure. Nevertheless, IARC concluded that there is convincing evidence of an association between the use of indoor tanning equipment and melanoma risk, and that the use of tanning beds should be discouraged.


Other Risks
In addition to the serious risk of skin cancer, tanning can cause:

* Premature aging. Tanning causes the skin to lose elasticity and wrinkle prematurely. This leathery look may not show up until many years after you’ve had a tan or sunburn.
* Immune suppression. UV-B radiation may suppress proper functioning of the body’s immune system and the skin’s natural defenses, leaving you more vulnerable to diseases, including skin cancer.
* Eye damage. Exposure to UV radiation can cause irreversible damage to the eyes.
* Allergic reaction. Some people who are especially sensitive to UV radiation may develop an itchy red rash and other adverse effects.

Advocates of tanning devices sometimes argue that using these devices is less dangerous than sun tanning because the intensity of UV radiation and the time spent tanning can be controlled. But there is no evidence to support these claims. In fact, sunlamps may be more dangerous than the sun because they can be used at the same high intensity every day of the year—unlike the sun whose intensity varies with the time of day, the season, and cloud cover.


Tanning in Children and Teens
FDA is particularly concerned about children and teens being exposed to UV rays. Intermittent exposures to intense UV radiation leading to sunburns, especially in childhood and teen years, increase the risk of melanoma, according to NCI.

FDA believes that limiting sun exposure and using sunscreen or sunblock are particularly important for children since these measures can prevent sunburn at a young age.

NCI reports that women who use tanning beds more than once a month are 55 percent more likely to develop melanoma. Teenage girls and young women make up a growing number of tanning bed customers.

“Young people may not think they are vulnerable to skin cancer,” says Kaczmarek. “They have difficulty thinking about their own mortality.” Yet of the more than 68,000 people in the United States who will learn they have melanoma this year, one out of eight will die from it, according to NCI estimates. In addition, the American Academy of Dermatology reports that melanoma is the second most common cancer in women 20 to 29 years old.

Some states are considering laws to ban those under age 18 from using tanning beds. And many states now have laws that require minors to have a parent’s consent or be accompanied by a parent to the tanning facility.

FDA’s current performance standard requires that a sunlamp product’s label include a recommended exposure schedule. FDA has advised manufacturers that this schedule should provide for exposures of no more than three sessions in the first week.

In an NCI-sponsored study published in September 2009 in the Archives of Dermatology, the study researchers hired and trained college students to pose as 15-year-old, fair-skinned girls who had never tanned before. By telephone, the students asked more than 3,600 tanning facilities in all 50 states about their practices.

Less than 11 percent of the facilities followed FDA’s recommended exposure schedule of three or fewer sessions the first week. About 71 percent said they would allow a teen to tan all seven days the first week, and many promoted frequent tanning with “unlimited tanning” discount price packages.

About 87 percent of the facilities required parental consent, leading the researchers to conclude that “many parents are allowing their teens to tan and are providing written consent or accompaniment.”

“Parents should carefully consider the risks before allowing their children under 18 to tan,” says Miller.


FDA Regulation
FDA regulates radiation-emitting products, including sunlamps and products that contain them, such as tanning beds and booths and portable home units. Manufacturers of sunlamps must comply with FDA regulations, including the performance standard for sunlamp products.

FDA requires sunlamp products to carry a warning label with specific information. Based on the results of consumer testing, FDA is considering amending the warning label requirements to
- strengthen the warnings about skin cancer and irreversible eye damage
- make the warning easier for consumers to read and understand
In a December 2008 Report to Congress, FDA noted that FDA/NCI studies found that the UV exposures typically provided by sunlamp products are excessive, and that comparable cosmetic effects can be produced with exposures that are only one-third or even one-fourth the levels currently used. FDA is evaluating the results of this research and considering whether those results warrant changes to its performance standard for sunlamp products.

The Riskiest Practices
FDA, NCI, the American Academy of Dermatology, and other health organizations advise limiting exposure to natural UV radiation from the sun and avoiding artificial UV sources such as tanning beds entirely.

All use of tanning beds increases the risk of skin cancer. Certain practices are especially dangerous. These include:

.Failing to wear the goggles provided, which can lead to short- and long-term eye injury.
..Starting with long exposures (close to the maximum time for the particular tanning bed), which can lead to burning. Because sunburn takes 6 to 48 hours to develop, you may not realize your skin is burned until it’s too late.
...Failing to follow manufacturer-recommended exposure times on the label for your skin type.
....Tanning while using certain medications or cosmetics that may make you more sensitive to UV rays. Talk to your doctor or pharmacist first.


Melanoma: One Woman's Story
Brittany Lietz Cicala of Chesapeake Beach, Md., began tanning indoors at age 17. She stopped at age 20 when she was diagnosed with melanoma, the deadliest form of skin cancer. The former Miss Maryland says she used tanning beds at least four times a week, and sometimes every day.

"Growing up, until I started using tanning beds, my parents were very strict about me wearing sunscreen," says Cicala. Although she also tanned in the summer sun during her 3 years of tanning bed use, Cicala estimates that 90 percent of her UV exposure was in tanning beds during this period.

In the 4 years since she was diagnosed with melanoma, Cicala’s surgeries have left her with about 25 scars. Cicala gets a head-to-toe skin exam every 3 months, which usually results in removal of a suspicious growth.

This article appears on FDA's Consumer Updates page, which features the latest on all FDA-regulated products.