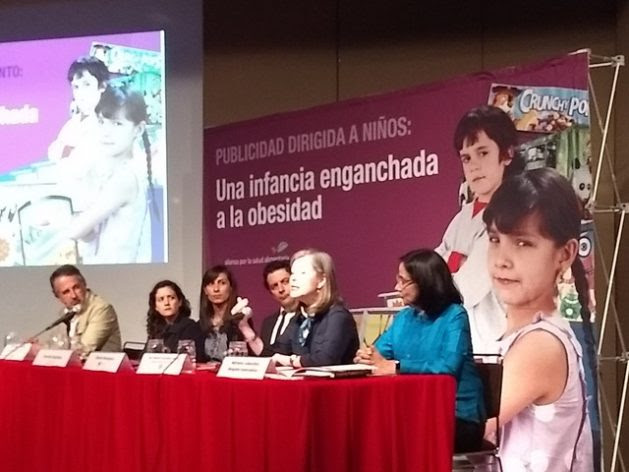 Members of the Alliance for Food Health, a collective of organisations and academics, called in Mexico for better regulation of advertising of junk food aimed at children and of food and beverage labelling, during the launch of the report “A childhood hooked on obesity” in Mexico City. Credit: Emilio Godoy/IPS
NEW DELHI, Feb 28 2020 (IPS) - Paradoxically, when the number of people suffering from undernourishment or hunger has risen in the world, so, too, have those afflicted by overweight and obesity. Latin America’s second largest economy, Mexico, for instance, is currently battling one of the world’s largest epidemics of obesity and its success is bound to be emulated by countries of the South. The numbers involved are staggering. The director-general of the National Institute of Public Health, Dr Juan Rivera told the Financial Times that “seventy five percent of adults and 35 percent of children and adolescents are overweight or obese… The State has a duty to protect public health.”
Mexico’s public health crisis is reflected in the third edition of the Food Sustainability Index (FSI) – based on the pillars of sustainable agriculture, food loss/waste and nutritional challenges — developed by the Economist Intelligence Unit and the Barilla Center for Food & Nutrition in Italy. Nutritional challenges in particular are tracked by several indicators like life quality (prevalence of malnourishment, micronutrient deficiency), life expectancy (prevalence of overnourishment, impact on health) and dietary patterns (diet composition, number of people per fast food restaurant and quality of policy response to dietary patterns).
Out of a scale of 0 to 100, where 100 represents the greatest progress towards meeting a performance indicator, Mexico registered low scores of 13.9 on the prevalence of overnourishment or overweight that ranks it 61st out of 67 countries tracked by the FSI.The share of those who are overweight among adults and children are also broadly in line with what was indicated by Dr Rivera. Mexican diets have high levels of sugar with a score of 10.3 that places it among the bottom five out of the 67 countries as per this indicator. The score for the number of people per fast food restaurant is also rather low at 1.9. 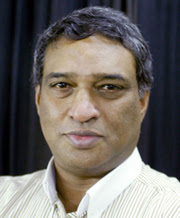 N Chandra Mohan
However, Mexico is in the top five countries for its policy response to dietary patterns. The country now plans to have a compulsory labeling system in place by March whereby food and beverage products sold in the country will have warnings that they “contain too much sugar” or “too many calories” or “too much fat”. In 2014, this country imposed taxes on sugar in foods like soft drinks and junk food. But this taxation route has had a limited impact in curbing consumption of these items as obesity has acquired epidemic proportions. Non-communicable diseases in the population have also increased like diabetes, hypertension and heart disease.


The proximate causes of this obesity epidemic stem from more and more Mexicans living in urban areas with economic development. Only a fifth now resides in rural areas. Urbanisation in turn has been associated with shifts in dietary patterns from traditional foods including fruits and vegetables towards low-cost energy-dense foods that are high in sugar and deficient in micronutrients. Metropolitan life styles are also sedentary than living in the rural countryside. With the consumption of more fast food and sugary drinks, the energy imbalance between calories consumed and calories expended is manifested in overweight and obesity.
To combat obesity, a welcome factor of change is that local communities, especially in Mexico’s countryside, are also getting involved in this effort. Last year, IPS reported the efforts of the non-governmental Amaranth Network in the Mixteca region, in the southern state of Oaxaca, to grow a native crop amaranth alongside traditional corn and beans. The inclusion of amaranth with other high protein seeds helps to significantly improve the nutritional quality of diets. The cultivation of this crop has produced benefits such as the organisation of farmers, processors and consumers and much-needed public funding to scale up this laudable initiative.
In contrast to Mexico, elsewhere in the South – in vast parts of sub-Saharan Africa and Asia like India — the problem is much grimmer with the paradox of undernourishment or hunger coexisting with obesity. This double burden of malnutrition co-exists within countries, within communities and also within households according to Dr Raghav Gaiha, Professorial Research Fellow, University of Manchester. The excess energy from low-cost energy-dense food can affect children and adults within the same household differently: The children may use up the excess energy and remain underweight while adults are likely to become overweight.
In India, for instance, the ranks of the hungry are also set to further rise with domestic food prices (including global as well) going through the roof amidst a sharp slowdown in overall economic growth. This can constrain budgetary resources for vastly stepping up outlays for nutrition initiatives for children through schemes like the Integrated Child Development Services and Mid-day Meals Programme. The provision of healthy food items like millets and pulses through the nationwide public distribution system is also necessary. The prevalence of hunger with rising obesity calls for best practices to be shared within the South.
N Chandra Mohan is an economics and business commentator