This quasi-experimental study investigated the effect of an antibiotic cycling policy based on time-series analysis of epidemiologic data, which identified antimicrobial drugs and time periods for restriction. Cyclical restrictions of amoxicillin/clavulanic acid, piperacillin/tazobactam, and clarithromycin were undertaken over a 2-year period in the intervention hospital. We used segmented regression analysis to compare the effect on the incidence of healthcare-associated Clostridioides difficile infection (HA-CDI), healthcare-associated methicillin-resistant Staphylococcus aureus(HA-MRSA), and new extended-spectrum β-lactamase (ESBL) isolates and on changes in resistance patterns of the HA-MRSA and ESBL organisms between the intervention and control hospitals. HA-CDI incidence did not change. HA-MRSA incidence increased significantly in the intervention hospital. The resistance of new ESBL isolates to amoxicillin/clavulanic acid and piperacillin/tazobactam decreased significantly in the intervention hospital; however, resistance to piperacillin/tazobactam increased after a return to the standard policy. The results question the value of antibiotic cycling to antibiotic stewardship.
Restrictive antimicrobial prescribing guidelines have successfully reduced the incidence of Clostridioides difficile infection (CDI; formerly Clostridium difficile) and methicillin-resistant Staphylococcus aureus (MRSA) (1–6). However, these guidelines have been suggested to create an environment of antimicrobial homogeneity that may enhance the development and spread of antimicrobial resistance (7,8). Antibiotic cycling has been proposed as an effective strategy to increase antimicrobial heterogeneity and decrease the development of antimicrobial resistance (8,9). This method of increasing antimicrobial heterogeneity has had mixed effects on antimicrobial resistance; however, investigations have been conducted mainly in intensive care units (ICUs) and in patients with specific infections (neutropenic sepsis, ventilator-associated pneumonia), and cycling periods have been arbitrarily defined, ranging from 1 week to 6 months (10–22). In a meta-analysis of studies investigating antibiotic cycling, the optimal cycling period was identified as 30 days (23). When the cycling period is too long, the effect becomes equivalent to continuous use of a single agent, increasing antimicrobial homogeneity.
We aimed to evaluate the effect of an antibiotic cycling policy, derived using time-series analysis of retrospective epidemiologic data, on the incidence of healthcare-associated MRSA (HA-MRSA) and healthcare-associated CDI (HA-CDI). A secondary aim was to evaluate the effect of this policy on the incidence of infections caused by extended-spectrum β-lactamase (ESBL)–producing organisms.

Figure 2. Antibiotic cycling schedule in Antrim Area Hospital, Northern Ireland, UK, showing the months where each antibiotic was recommended. Restrictions in the use of each antibiotic were in place during all other...
The study comprised 3 phases. First was development of an antibiotic cycling policy using retrospective data for April 2007–March 2012; second, implementation and assessment of the effect of this policy in AAH and comparative data collected in CH, where the policy was not implemented; and third, postintervention follow-up after return to the standard antibiotic policy in AAH (Table 1; Figures 1, 2).

For the retrospective part of the study (Figure 1), we determined monthly incidence of the output variables (HA-MRSA, HA-CDI) and input variables (other MRSA; other CDI; antimicrobial and infection control agent use; pharmacy, medical, and nursing staffing levels [full-time equivalents (FTEs), where 1 FTE equals 1 full-time worker]; and age-adjusted Charlson comorbidity index of all patients discharged from AAH). We obtained a record of all MRSA-positive patients identified in AAH from the hospital microbiology laboratory. Cases were classified as HA-MRSA or other MRSA (Table 1). MRSA isolates from clinical samples and screening swab samples were detected according to routine microbiological procedures (26). Throughout the study period, targeted MRSA screening was undertaken on admission to AAH or CH for oncology patients; patients with a history of MRSA; patients admitted from a residential or nursing home; and patients admitted to the ICU, neonatal unit, or renal unit. For each patient, repeat isolates during the same admission period were excluded.
We obtained data on the number of patients in whom CDI was diagnosed from the microbiology laboratory and identified HA-CDI and other CDI cases (Table 1). During March 2007–April 2009, we identified C. difficile through detection of toxins A and B from the feces of patients with diarrhea using the PremierToxin A and B kit (Meridian Bioscience, Europe, http://www.meridianbioscience.eu) and an ELISA technique. In May 2009, this identification process was changed to a 3-step technique using the Techlab C.diff Quik Chek complete (Abbott, https://www.alere.com/) combined glutamate dehydrogenase and toxin A and B enzyme immunoassay and the Cepheid Xpert C.difficile PCR (http://www.cepheid.com/) for detection of potentially toxigenic strains (27).
We obtained records of monthly systemic antimicrobial drug use from the pharmacy computer system and converted to defined daily doses (DDD) (26,28). The use of antiseptic agents, such as chlorhexidine skin wash (liters), alcohol-impregnated wipes (number of wipes), and alcohol-based hand rub (liters), acted as a proxy measure for hand hygiene in the study hospitals (29). We determined monthly use of these agents across both hospitals during the study period from the pharmacy computer system and the National Health Service Supply Chain. We obtained the monthly number of nursing, auxiliary nursing, clinical pharmacy, and medical FTEs in AAH from the NHSCT Finance Department. We determined the monthly average age-adjusted comorbidity for AAH by calculating the Charlson age-adjusted comorbidity index of all patients discharged each month (30). For all of these variables, we adjusted the value to an incidence or use per 100 occupied bed days (OBD).
Using linear regression, we determined the trends in each of the explanatory variables. We constructed autoregressive integrated moving average models to model the relationship between the input and output variables in AAH for April 2007–March 2012 (Appendix). Based on the antimicrobial drugs that were significantly associated with HA-CDI and HA-MRSA, together with the time lag between observing a change in the antimicrobial drug use and a corresponding change in HA-MRSA or HA-CDI incidence, we developed an antibiotic cycling policy and implemented it in AAH over a 2-year period (October 13–September 15) (Figure 2).

The antibiotic cycling policy was implemented on wards in AAH except pediatrics, neonatal unit, palliative care ward, and ICU. We excluded the palliative care ward and ICU because patients in these departments usually have received multiple previous courses of antimicrobial drugs; therefore, empirical guidelines do not apply, and antimicrobial therapy is guided by advice from the NHSCT Consultant Microbiologists. The cycling policy affected the antimicrobial recommendations for community-acquired pneumonia, hospital-acquired pneumonia, intraabdominal sepsis, and urinary tract infections. In months during which all 3 antimicrobial drugs (amoxicillin/clavulanic acid [AMC], piperacillin/tazobactam [TZP], and macrolides) were restricted, levofloxacin was recommended for the treatment of severe community-acquired pneumonia and intraabdominal sepsis. However, levofloxacin could be supplied only on receipt of an order form signed by medical staff. All patients prescribed levofloxacin were followed up for 12 weeks. During this time, the NHSCT laboratory system was used to determine the proportion of patients from whom C. difficilewas isolated from fecal samples or MRSA from screening swab samples and clinical samples. We constructed life tables to determine the probability of remaining CDI- and MRSA-free for each week after levofloxacin treatment. After this, the cumulative probability of remaining CDI- or MRSA-free was determined and expressed as a percentage.
Before implementation of this policy, clinical staff were trained on the intervention. Monthly reminders about the policy changes were sent to staff groups, and each month a new antibiotic policy was displayed on participating wards.
During periods of restriction of a cycled antimicrobial drug, stock was removed from all bulk orders, and these drugs could be supplied only on receipt of a request form signed by a clinician, outlining the patient’s details and indication for treatment. During this time, the Trustwide antibiotic stewardship activities continued as usual. These included review of requests of all restricted antimicrobial drugs by the pharmacist and consultant microbiologist and weekly audits on adherence to the Trust antibiotic policy. Where inappropriate use was identified, it was fed back to the prescriber in real time and monthly to all consultants and the medical director.
For the preintervention (November 11–September 13), intervention (October 13–September 15), and postintervention (October 15–September 2016) periods in AAH, the incidence of HA-CDI, other CDI, HA-MRSA, other MRSA, and the use of antimicrobial drugs and infection control agents were collected as described. Furthermore, HA-MRSA resistance patterns and new ESBL incidence and resistance patterns were determined. These variables were also identified in CH (November 2011–September 2015) for comparative analysis. For HA-MRSA isolates identified from clinical samples, we determined the percentage change in ciprofloxacin, erythromycin, AMC, and TZP resistance during the preintervention and intervention periods for both hospitals. Duplicate isolates identified within 7 days of the initial isolate were excluded.
We identified ESBL isolates from clinical samples using the method described by the European Committee on Antimicrobial Sensitivity Testing for the detection of ESBLs (31). The monthly number of new ESBL isolates and percentage change in gentamicin, ciprofloxacin, AMC, and TZP resistance during the preintervention and intervention periods was determined for both hospitals.
We assessed the effect of the antibiotic cycling policy on HA-MRSA, HA-CDI, and new ESBL incidence in AAH using segmented regression analysis (32). Segmented regression analysis was used to identify changes in the outcome measures in CH during the study period. We examined the effect of the antibiotic cycling policy on changes in HA-MRSA and new ESBL resistance patterns in AAH in comparison with CH using χ2 analysis.
For AAH only, we used the aforementioned techniques to determine the effect of reverting to the standard antibiotic policy on HA-MRSA, HA-CDI, and new ESBL incidence during October 2015–September 2016. We also determined changes in resistance patterns of HA-MRSA and new ESBL isolates.
For all analyses, we considered p<0.05 to be statistically significant. All analyses were conducted using Eviews 8 software (QMS, http://www.eviews.com/home.html) and Microsoft Excel version 13 (https://www.microsoft.com/en-us).
Top

Evaluation of Effect of Intervention 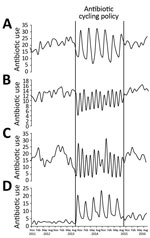 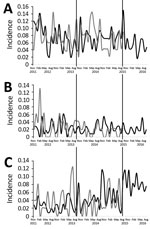 Figure 4. Incidence of healthcare-associated methicillin-resistant Staphylococcus aureus (A), healthcare-associated Clostridium difficileinfection (B), and new extended-spectrum β-lactamase (C) cases throughout preintervention (November 2011–September 2013), intervention (October 2013–September 2015), and postintervention (October 15–September...
Throughout the preintervention period, the average monthly adherence to the standard antibiotic policy was 92% in AAH and 91% in CH. HA-CDI and new ESBL incidence did not change significantly in either hospital; however, after the antibiotic cycling policy was introduced in AAH, a significant increasing trend in HA-MRSA incidence was observed, which was not evident in CH (Table 2; Figure 4). A subset analysis of the AAH HA-MRSA isolates from clinical samples also demonstrated a significant increase in the HA-MRSA trend (coefficient 0.0023, p<0.01).
During the intervention period, 792 patients received levofloxacin; 15 tested MRSA positive before receiving levofloxacin and were excluded from the MRSA cohort (Appendix Figure 3). Eleven patients tested MRSA positive during the follow-up period, and 81 patients died. The probability of remaining MRSA-free after the 12-week follow-up period was 98.5% (Appendix Figure 4). The CDI cohort comprised 792 patients, of whom 87 died during the follow-up period. Two patients tested C. difficile glutamate dehydrogenase–positive and C. difficile toxin negative, and 9 patients tested C. difficile toxin positive (Appendix Figure 5). The probability of remaining free of CDI during the 12-week follow-up period was 98.5% (AppendixFigure 6).

During the postintervention period, the average monthly adherence to the standard antibiotic policy in AAH remained at 92% (Appendix Table 4). The overall trend in the use of each of the cycled antimicrobial drugs remained unchanged during the postintervention period (TZP trend coefficient 0.147, p = 0.12; macrolide trend coefficient −0.1699, p = 0.55; AMC trend coefficient 0.2996, p = 0.16; fluoroquinolone trend coefficient 0.148, p = 0.30). However, in AAH, use of monobactams decreased significantly (coefficient −0.2382, p<0.01 [Appendix Table 4]). Segmented regression analysis identified an immediate borderline significant decrease in HA-MRSA incidence and an immediate significant increase in new ESBL incidence (Table 3). A subset analysis of AAH HA-MRSA isolates from clinical samples demonstrated no change in the incidence of this organism after the end of antibiotic cycling; however, the level of HA-MRSA from clinical samples immediately decreased significantly (coefficient −0.029, p = 0.0261).

This work was supported by a grant from the Northern Ireland Health and Social Care Research and Development Office (EAT/4375/10 to G.M.C.B.).
Top